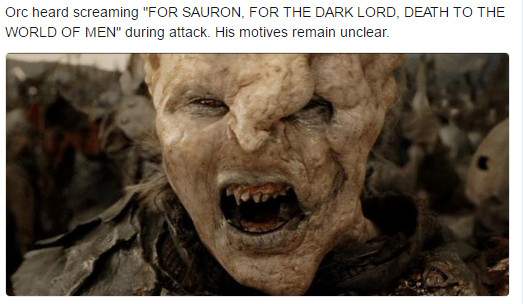 It’s hard to imagine lines of orcs in Lord of the Rings giving each other a hug, isn’t it? How about an orc being grateful for food he was given or found? It doesn’t happen. Orcs are pricks.

Tolkien wanted everyone to know how really ugly orcs were so badly, he gave small story sized sections of the Lord of the Rings to the orcs talking to each other. To show how disgustingly perverted these creatures were he had them perpetually complaining about their lot, they were never grateful for anything even when they were winning. They were a cowed, complaining race ruled by a violent elite that split into smaller and smaller sub groups who were at a near to war footing with each other. It’s starting to sound familiar isn’t it?

One feature everyone recognises (and hates) about substandard people, is their constant complaining about their lot, often with reference to someone else mysteriously having it better than them that doesn’t deserve it.

Human capacity to thrive and live a great life depends on persisting in the face of bad odds. That means you need to show a little gratitude for what you have and then be able to share that gratitude with your tribe.

You might be in a walled city with a warlike enemy outside but you are going to shove your spears up their arse if they come over your wall, you are going to protect your women and kids and hopefully the outsiders will piss off after a while. Maybe even catch some disease from all the shitting they are doing on the ground near their drinking water, or run out of food over winter. Keep your chin up we can outlast these bastards and then it will all be clover in comparison.

For our cousins in the US the day of being grateful is even called Thanksgiving. The giving of thanks for delivery from hunger and surviving attacks from the natives or competing colonial powers in the US in the 17th and 18th centuries was no small deal. It was from the white hot forge of those days that the US character of independence and self sufficiency grew strong enough to bail on the Brits when it came to paying the tab for colonial upkeep.

Gratitude, being thankful, building persistence with your fellow citizens creates strong bonds in humans. That rush that comes over you when some guy is having a go and you can see your mates line up beside you in your peripheral vision; ‘not looking quite as flash now are you c*nt?’ as the guy slopes off. What do you do after? You give thanks, you buy your mates a beer and slap each other on the back. We would have had that prick if he made one step forward.

Gratitude is so powerful that nations have multiple holidays and events that celebrate how we should feel. Every nation has a day celebrating who they are and the theme is always one of citizens enjoying their nation together having overcome the odds of life, we have a few drinks, watch some fireworks; ‘Christ Almighty this is the best country in the world isn’t it? I am so lucky to be here.’

We have days celebrating our soldiers and how they should receive our gratitude for fighting for us so our nation could be here and safe. At Christmas we thank the savior for being born and bringing the word of Christ to the world and at Easter we thank him for dying in our place, as opposed to the preferred Old Testament Noah alternative of flicking the reset button on the frozen error 404 screen of fuckery. 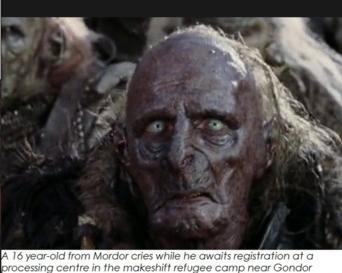 Have you ever wondered why EVERY SINGLE giving of thanks style ceremony the West is now marred by the mutant ugly orcs of the left finding fault. Australia Day is Sorry Day or Invasion Day, Thanksgiving might as well be called ‘Murdering Indians (sorry native Americans) Day’, Christmas (sorry happy holiday) is just about celebrating a paedophilic and oppressive patriarchal narrative, the ANZACs were arsekissers supporting their colonial masters etc. You get my drift.

When speaking to someone from the left you often find the conversation is a paen of complaints about everything. Raaysest white men, evil plastic pollution, global warming, Western (never Chinese) capitalists, violence against women by men (never by women) and on and on and on.

These orcs often have degrees, but they are nearly always pretty shit easy ones involving submission of pre-canned lickspittle answers to Marxist lecturers on an ego trip. As a result they have crap jobs, where they have jobs at all.

They are often unattractive like their Tolkien namesakes as they rarely exercise or watch what they eat. No one decent wants to fuck them, so like orcs they have to fuck their own. They have zero or maybe one kid, who has an outsized ego but is even dumber than mum and dad due to poor diet and attendance at a Steiner school where he/she/it learns to paint his/hzer feelings using cow dung and a peice of burnt stump.

Why couldn’t they have had more money? How come their wife is so fuck ugly and lectures them on ‘overpopulating the world’ so that they need a vasectomy just to get a low quality, lights off shag on a Friday night? Why have the other people they went to uni/school with done so well, why do those guys have several kids, a wife who looks great in a summer skirt and have the odd trip to Europe? It must be because they are evil conservatives and are raping the world. I’d better go out and protest invasion day and try to drop that into a conversation if I manage to see them, just to show them I am morally superior. I’ll also mention my government subsidised, birdshit covered solar panels as well and how I am saving the world with them. 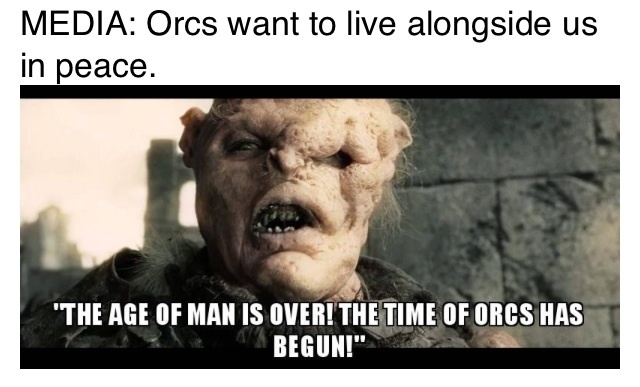 The left wing are Tolkien’s orcs. They are never happy, they are never grateful, they want to destroy someone else’s institutions by trashing the normal instincts that humans have to be grateful for being alive. They want to kill that little endorphin rush you have when you hug your wife and kids or toast a few mates over a barbie on Australia Day, or have a lump in your throat as thousands of voices say ‘lest we forget’ and you remember relatives who died so your country could live.

This is the orc strategy. It’s like Tolkien had them living in suburbs with everyone else, and sending their defective toothy kids to school with yours. They want the elves to hate the dwarfs, the hobbits to be scared, and everyone to shit on the white heterosexual men of Gondor.

Fight the orcs on the left, be aware that stopping our feelings of gratitude is intended to empty our walls of unified defenders of the faith, and they will find excuses to do it every time irrespective of what appeasement is done. Don’t feel guilty (EVER!!) for any of the filth that heaves from their black broken toothed mouths to take away those feelings of being one with your family, your mates or your country. Be grateful on our national days of giving thanks to our country, our soldiers and our Savior.

And if you see an opportunity, stick a spear up an orc’s arse. It may be the closest they have come to sex for a long time.