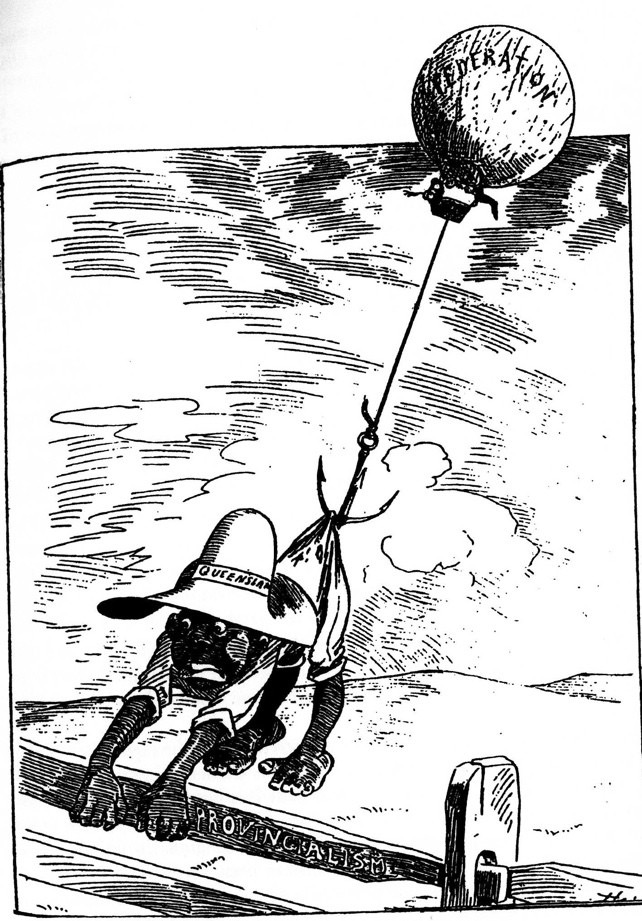 In 1901 the Australian colonies came together and created a federation to prevent Globalists in Western Australia, the Northern Territory and Queensland from importing cheap migrant labour from Asia and the Pacific Islands to work on farms, mines and railway construction that would eventually threaten our sovereignty. The Australian Labor Party had already been created in North Western Queensland to fight for the rights of white Australian workers who were forced to compete in dangerous and underpaid workplaces with foreign (almost) slave labourers.

With the Australian Federation came the White Australia Policy that immediately banned blackbirding and saved Australians from being replaced by non-whites for nearly 100 years. Australia grew to have one of the highest living standards, wages and conditions that the world has ever seen. 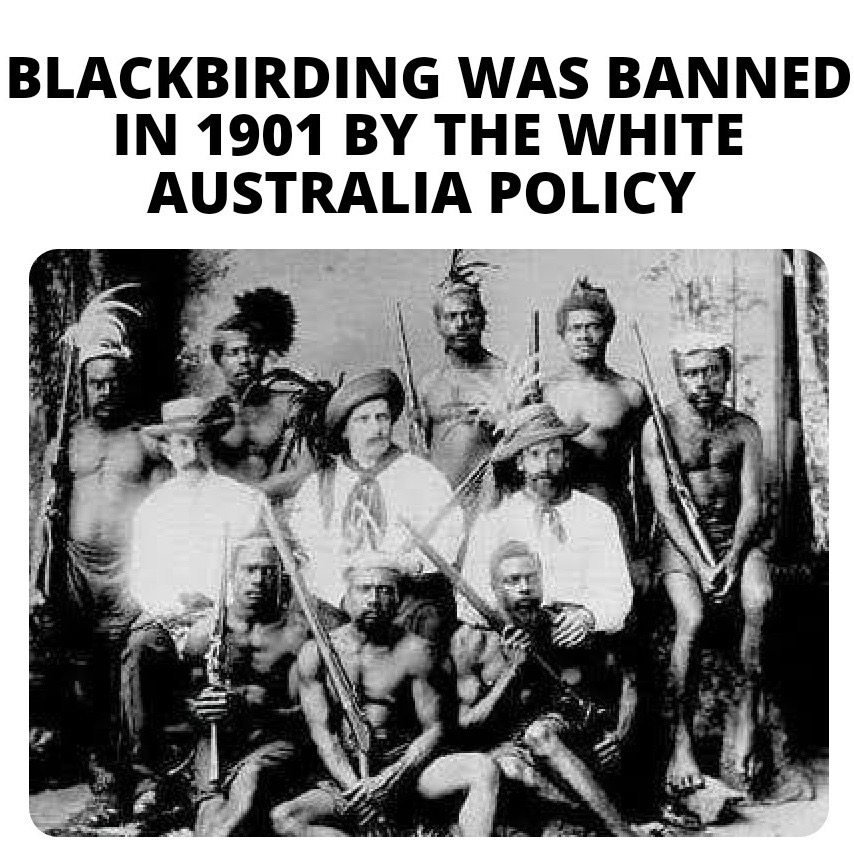 But while we slept the criminal elite schemed. They infiltrated our media and politics. They ended the White Australia Policy illegally without a vote and set about flooding Australia with the third world and giving them citizenship. But although replacing Australians with non-whites satisfied the Globalists’ white genocide agenda and reduced real wages for everyone, giving them citizenship afforded them the same rights to pay and conditions as other Australians so the Globalists schemed to find a new (old) way of importing cheaper labour.

First the criminal elite taxed and ripped off farmers with exorbitant banking costs until they became desperate and suicidal, as many became almost bankrupt. The farmers begged their oppressors for a solution to labour costs and the Globalists magically already have the answer. Problem, reaction, solution.

Now the Globalists have reopened the blackbirding channels from Vanuatu and recently brought 300 workers into the Northern Territory while many Australians are still stranded oversea. As always the first 300 labourers will get payed well as the first blackbirds were too. If Australians accept this outrage it will once again be open slather. 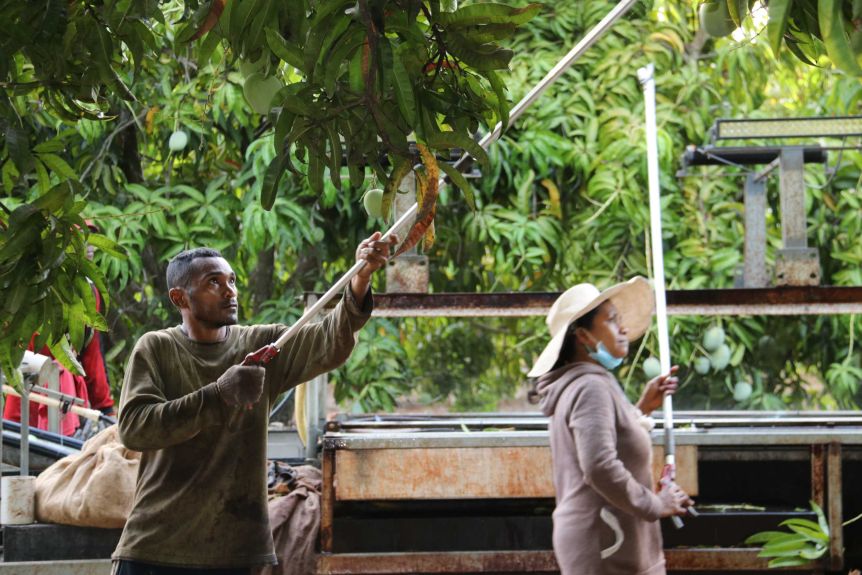 Mr. Skliros of the Northern Territory Mango Industry Association said in July (amid the Covid lockdown) that:

“The plan is to get every two weeks, possibly two planes at once, so we’re quarantining 300 workers.”

“So it’s not just one pilot program, we hope this all goes well and it opens up the avenue to bring more workers in. We hope it could be a shortfall of 1000 people we could bring in if required.”

Even though the majority of white Australians always objected to any form of cheap or slave labour, 120 years after we banned it the same Globalists who brought them to Australia are blaming whites for blackbirding and telling us we have to replace ourselves with non-whites to redeem our sins. The last time we were threatened by Globalists and their cheap labour programs we created Australia to protect our borders and stop these criminal elites. What will we do this time?

The government is telling us that due to Covid we no longer have enough backpackers to pick the fruit and that is why we need ‘guest workers’. This is a lie. With Covid we now have hundreds of thousands of unemployed Australians who would love to pick fruit.

Cait Kelly investigated a situation where 1500 Australians applied for fruit picking jobs but not one of them was given a go. The Farmworkers’ Union explained that the farms prefer to employ ‘cheap, easily exploitable foreign workers over locals’.

If the antiwhite government did not have an agenda to harm and replace Australians as explained in previous articles they would easily solve the farm worker shortages even without cutting farm taxes and bank ripoffs. Any schoolchild could solve this problem in five minutes.

It is a full time job to get and stay on the dole when you are unemployed. If you have the dole and are renting a house why would you sacrifice your welfare for a seasonal job? You will have to pay rent in town and on the farm or when you return to the city you will be unemployed again and homeless as well. Swagmen of old used to camp on farms but now camping is illegal on most properties.

Farmers on the other hand are ripped off by government taxes and banks to a point where they are willing to take risks and exploit workers just to survive on the land.

A simple solution might be to not charge farm workers income tax at all for 6 months or to allow people to work on farms and get the dole at the same time. Perhaps Centrelink could just guarantee that after fruit picking their dole will be reinstated without weeks of phone calls, paperwork and uncertainty. Maybe the government could pay for farm accommodation for every Australian worker if they actually cared. Perhaps the government could send a thank you card to every worker with a small cheque to show that Australians appreciate their work because the alternative is unthinkable.

Queensland is still paying compensation to relatives of former blackbirds from their last scheme over 120 years ago. We object to cheap labour schemes not because we object to the charming hard working character of the workers but because we know many will not return home as in the past and we have an obligation to our children to create a nation that is self sufficient and free from exploitation.

There are so many solutions to the problem but the Globalists want to replace you and will use any excuse and tell any lie to further their agenda. They know well that white people make up just 8% of the world’s population so if they flood all white majority countries with the third world they can eliminate white children for ever. There will still be a billion Africans in Africa, a billion Indians in India and two billion Asians in Asia.