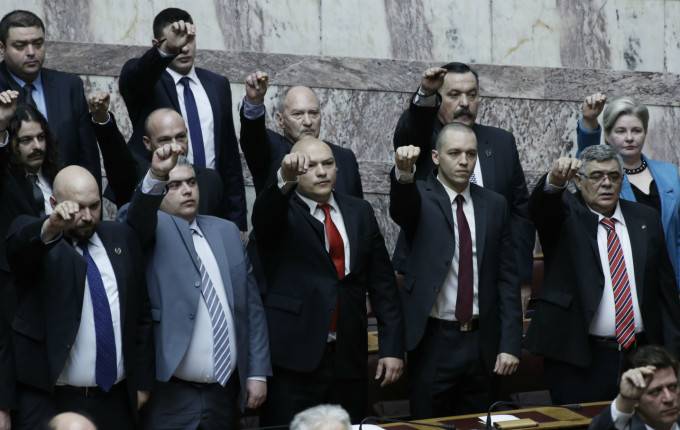 The ruling is a historic departure for post-war liberalism, which traditionally frowns upon putting members of parliament in prison for their beliefs. All 18 elected MPs, including Golden Dawn’s leader Nikos Michaloliakos, now face a minimum of 10 years in prison.

In total, 68 defendants have been convicted for incidents stemming from 2012 and 2013, such as a confrontation with foreign nationals illegally fishing in Greek waters, a brawl with members of PAME (the paramilitary wing of the Greek Communist Party), and the death of Pavlos Fyssas, a local “antifa” rapper who was stabbed while part of a mob attacking low-level Golden Dawn activist, Giorgios Roupakias, at a bar.

A leftist group retaliated for Fyssas death by murdering two Golden Dawn members in a drive by shooting shortly after. The case remains unsolved and the country’s government has shown no interest in finding the killers.

Golden Dawn caused problems for the Greek government in 2012 when the party entered parliament with 7% of the vote amidst an economic crisis on an anti-immigration and anti-corruption platform. The party then rose to become the third most popular party in Greece.

The decision to arrest Golden Dawn’s parliament members was made in 2013 by the conservative government of New Democracy, led by Antonis Samaras, who decided to make the highly controversial move shortly after a meeting with the World Jewish Congress and other American and European Jewish organizations. Benjamin Netanyahu, Shimon Peres, and other Israeli officials also lauded the crackdown.

Greek law grants members of parliament with legal immunity, a clause that has allowed the political class to get away with decades of rampant corruption and crime. Shortly before the arrests, the communist, liberal and conservative parties in the Hellenic parliament voted to strip Golden Dawn members of this right while keeping it for themselves. The Greek state is considered one of the most corrupt in Europe, with a corruption perception index of 48 — barely better than African nations like Senegal (45).

The prosecutorial theory behind declaring Golden Dawn a criminal organization asserts that it is a National Socialist organization, thus it adheres to the Leader Principle (Fuhrerprinzip). Lawyers representing the state argued that this makes Nikos Michaloliakos and the rest of the party’s leadership personally responsible for everything their members and supporters do.

To gauge the absurdity of this case, in the years of the supposed criminal wrongdoings 50,000 Golden Dawn members marched at their yearly Imia rally in 2013. Almost half a million votes delivered them to parliament in 2012. Parliament members being held liable for the actions of all these people is untenable. It was a bad faith argument by people who just wanted to put them in prison for their ideas.

Last year, a number of throwaway “far-right” and pseudo-populist parties such as Greek Solution, which peddles in conspiracy theories, along with conservative defections by Ilias Kasidiaris and Ioannis Lagos (who were both convicted today), have been able to shave enough votes away from Golden Dawn to keep them from re-entering parliament. In spite of this, Golden Dawn is still widely resented by the ruling conservatives of New Democracy for pressuring them into taking harder stances against mass immigration and Turkish military aggression, positions they will promptly drop now that the coast is clear.

Left-wing extremists and frightened members of the ruling class around the world have been energized by this conviction. They have accepted that they have lost the intellectual debate and are now eager to use their tools in the state to declare nationalists criminals and put them in prison wherever they exist. If it can be done in EU member Greece, it can be done anywhere.

Conservatives by and large are either staying silent on the verdict or supporting it. Last week The Spectator, which in 2013 published an article (now deleted) by Taki Theodoracopulos defending Golden Dawn, published a piece by Yanis Baboulias urging they be locked up for being “Nazis.” Perhaps the cowardly right believes if they take this position, they will be imprisoned last.