I’d said I would stop watching AFL after the virtue signalling at the start of the year, but I watched the Grand Final last night between Richmond and Geelong. It was a very good game. Richmond won. Dustin Fletcher was supreme.

Gary Ablett dislocated his shoulder in the first minutes of the game.

The doctors popped it back in, gave him a jab and strapped him up. The crowd cheered when he emerged on the boundary line, warming up, testing his shoulder. The commentators noted that his opponents would surely test his shoulder, too.

Several times throughout the match he dropped to his knees in pain, clutching his shoulder. But he never went off the ground for it. I may be wrong, but I didn’t see him even go to the bench.

In early 1943 the German Field Marshall Von Paulus surrendered his army to the Soviets at Stalingrad, but a determined pocket of over 10,000 troops refused to surrender to the communists, and fought to the death. Ablett’s efforts last night aren’t in the same league as this, but they are of the same spirit – the idea that you are fighting for something bigger than yourself, being prepared to sacrifice one’s body for a higher purpose. To dedicate oneself to struggle and duty for no earthly reward.

Sport, sportsball, bread and circuses, these used to be a noble pastime for a people young and free with golden soil and wealth to toil. Now it is a distraction. 100,000 at the MCG for a game of football, when we are losing our country.

I would love to harness the energy and fanaticism both of the fans and the footballers. Despite the poz of its managerial class, Aussie Rules is still overwhelmingly white, and this is a good thing. Its players and its fans are our natural constituency. The qualities required to prepare one’s mind, body and spirit for the rigours of football are the same qualities required to secure the existence of our people and a future for white children.

At the end of the match, several players paid tribute to Ablett in interviews and speeches. The camera focused in on his interaction with his beautiful Aryan wife, and their baby which she carried in her arms. They were standing very close, and he kissed his child as only a proud father can. We couldn’t hear what he and his wife were saying, but she was obviously concerned about his shoulder, and he was saying “Don’t worry baby, everything is going to be okay”.

As a final honour, the Richmond players joined their beaten Geelong foe to form a guard of honour for Gary Ablett. They delayed their victory lap to do this. I have never seen this at a Grand Final before.

There is strength in our blood yet. 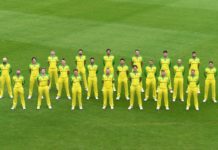 Aussie Cricket Team is having none of this BLM witchcraft nonsense 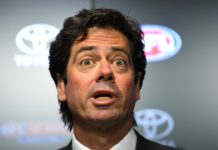