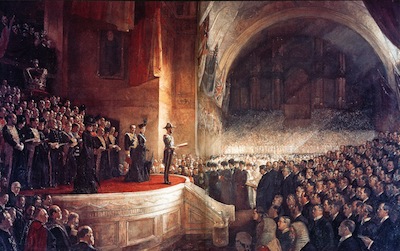 Lets start with my journey.

In the late 1980’s, when I was in my late teens, I was a Conservative. I rejected Feminism and Immigration, but I accepted a lot of mainstream ideas. But I also knew that things were going to get worse as there was no real opposition to the Left and I thought if only someone else would get things organised then things will turn around. I also thought that in thirty or so years many of the ideas the Left pushed would be mainstream. That seemed a lot time away, today it’s today!

In the 1990’s I remember thinking that things were changing, I could feel, it but I didn’t know if those changes would be good or bad. I kept waiting for the Right to get moving, to fight back but it never happened.

Only in the last decade did I decide that maybe I was part of the problem, maybe I should stop waiting for someone else to fix these problems. Maybe I could do something, maybe doing something was better than doing nothing. Which lead to fear and doubt. Did I have anything to contribute? Hadn’t it all been said already? Was I good enough?

But on the flip side it takes a bit of arrogance to think that you can change the world and I guess I was/am that arrogant. Like many others before me I thought that if I put it the right way then people would come flocking. Like a magic spell, the right words arranged in the correct way would make magic. Instead like all those who study, magic or otherwise, I found that it was lonely work filled with self-doubt and sometimes insight. But I was fortunate in one regard, I realised even before I began that this was a long term project. That once started that it would be hard to finish.

I also wanted to know why things had gone so wrong, why did the government go along with it, even encourage it?

Mark Richardson of Oz Conservative had been doing this a long time and he had become fond of the word Traditionalist. He suggested that we should call ourselves Traditionalists, but I resisted the idea. I didn’t want to jump from the frying pan into the fire. It seemed old fashioned, it seemed like it pointed to the past, it even seemed like a way of avoiding our current problems. But it was also clear that what we believed had some very big differences from what most people called Conservatism. It took a good while before I accepted that he was right, we have moved beyond Conservatism, we still had things in common but we also had things that it was better to give a different name to.

When I was a Conservative however, I felt like I was part of that fabled silent majority. Sure it was annoyingly silent but it was the majority. Since I became a Traditionalist I have felt exactly the opposite. That I really am an outsider and it has alienated me even further than I already felt from so much of society. As time has gone on I have come to believe that maybe we are the start of something. That while we write and talk about beliefs that are old, even ancient, even eternal, we are not doing it to an existing audience but to one that we are helping to create.

Maybe that is the arrogance speaking, maybe it’s the self-doubt, maybe it’s an insight, I’m not certain.

Russel Kirks ten conservative principles are a must read for anyone on the Right, if you haven’t read this short article you really should do so. It’s a great place to start.

Perhaps it would be well, most of the time, to use this word “conservative” as an adjective chiefly. For there exists no Model Conservative, and conservatism is the negation of ideology: it is a state of mind, a type of character, a way of looking at the civil social order.

Ever since I first read it I have wondered if he is right about this point. Is it true that Conservatism is not a ideology, and by extension Traditionalism?

If so isn’t it a bit like going into a knife fight unarmed?

In my dictionary Ideology is defined as:

“The organized system of beliefs or way of thinking of a person or group.”

Is Hinduism an ideology?

Are members of a ghost hunting group ideologies?

Most people think of ideology as something that is political, I’d agree. Further I think that the best way to think of an ideology is a political philosophy that believes in a Utopia. That believes that it is possible to create perfect people living within a perfect economic system overseen by a perfect political system. Human life without human problems.

I think it was necessary for us to step away from Conservatism. I further think that it was necessary for us to work on what we really believe and to look at what we want the world to look like. We have answered why things have gotten so bad, we have provided ideas on moving forward, but we need to do much more work on policy. How do we create the world that we want and how to we expose our ideas to a wider audience?

We also have a dilemma, we no longer support the current order, but we are not revolutionaries. As I have said elsewhere this is our civilization and the institutions that exist were created by our ancestors from our use and protection. How do we regain control or even influence over these institutions?

Are we an ideology?

Do we need to become an ideology?

We need to think on these points as I fear that when the time comes for us to act we will not be ready. We really need to be ready when our time comes.