In the old World War 2 classic The Dambusters there is a dog with a very curious name.

This has absolutely nothing to do with the following story.

Concerns are rising that China’s Three Gorges Dam, the world’s largest dam, could be on the verge of collapse triggering a devastating 250-foot tidal wave that would wipe out cities.

A major concern, after several weeks of raging floodwaters rushing through the dam at 60,000 cubic meters per second, is that part of the structure has shifted under enormous pressure, potentially jeopardizing the structural integrity of the dam.

As an aside, does anyone else find it creepy that for decades the foreigners who run Hollywood have been serving up scenes of us and our cities being completely wiped out as something we are supposed to view as entertainment?

Anyway, Zero Hedge are good value. They use the same strategy as The XYZ. Cut and paste mainstream media news articles then unpack the globalist gaslighting to get to the truth. Here is their cut and paste from the Sun:

Rumors of structural faults in the walls of the 14-year-old dam have grown as heavy rains deluged the swollen Yangtze River.

China’s secretive leaders – already facing a backlash over the Covid-19 pandemic which started in Wuhan in Hubei Province – have played down the threat.

But authorities are said to have quietly ordered the evacuation of 38 million Chinese in the threatened zone – equating to more than half the population of the UK.

Heavy rainfall is forecast to continue to pound the Yangtze River basin in the coming days after localized floods claimed at least 141 lives.

A dam made in China may only last 14 years. Typical.

At least it could thin their numbers. Authorities appear to be taking the threat seriously, given that they have forced mass evacuations. Check out this awesome simulation of the destruction it could cause.

And look what just happens to be downstream. 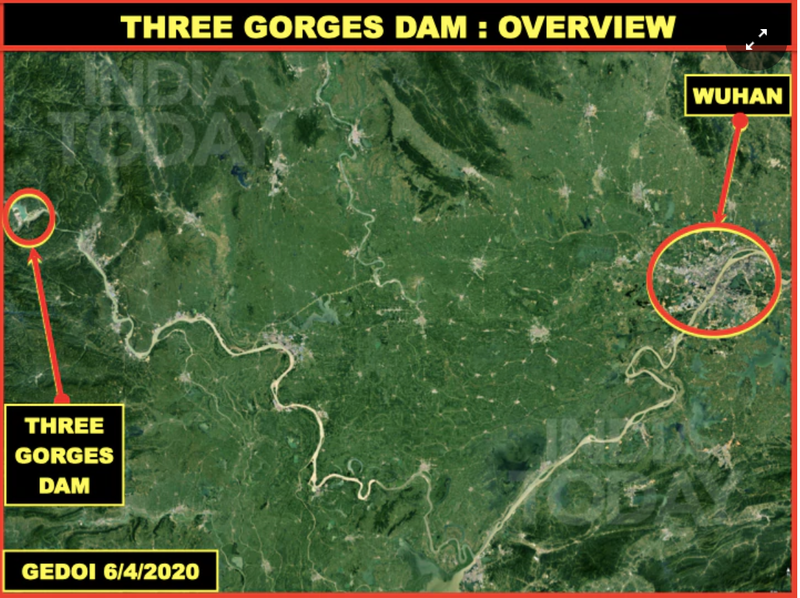 They already destroyed the evidence at the wet market. Are you thinking what I’m thinking? Back to Zero Hedge:

If a structural failure of the dam results in flooding conditions downstream, the Communist Party of China has a new scapegoat to blame the faltering economy, and or has the ability to wash away all the virus evidence in Wuhan, including the biosafety lab.

UPDATE: We could be talking one of the most horrific humanitarian disasters of all time, massive destruction, economic devastation and likely sabre rattling from the CCP if this thing topples. 2020 just keeps heating up.