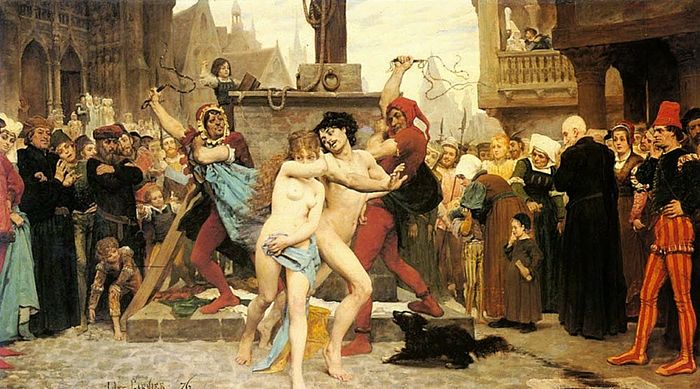 Over at anotherpoliticallyincorrectblog an argument has been made that it is silly for adultery or fornication to be against the law. He has made out a number of arguments to explain why recriminalizing these acts would not work.

“The reasons it’s ludicrous are pretty obvious. For one thing it would be entirely unenforceable. How would you prove such a charge in court, given that it’s almost certain that neither partner would have the slightest intention of coöperating with the prosecution? Would you force the woman to undergo a medical examination? Would you subject a woman (who might well be innocent) to such a humiliation? I suppose the police could keep the homes of suspected fornicators under surveillance, but does anyone really want cops peering into people’s bedroom windows to find out if they’re having non government approved sex? Does anyone want a police Chastity Squad kicking in people’s doors? All this quite apart from the fact that it amounts to the kind of social control one associates with 17th century Puritans.“

However I think he is wrong and missing the point.

These kinds of arguments have been made by Liberals for over 50 years and while The Politically Incorrect Australian is not a Liberal, he is using the same arguments. I mostly heard them in regards to decriminalizing homosexuality. That two consenting adults should be allowed to do as they liked in the privacy of their own home. That idea seemed reasonable to most people, myself included, and now we have public nudity and simulated sex acts at the Gay and Lesbian Mardi Gras every year.

If homosexuality was illegal then that simply could not take place. Homosexuality is important here as it is where most of his argument comes from. The ideas that were used to justify homosexuality also led to adultery and fornication being legalized.

Adultery, fornication (sex outside of marriage) and homosexuality were all illegal in most of the world 50 years ago. Not everywhere but in most places, including most places in the West. Yes in 1970 these things were illegal in most countries. We do not have to go back to the Puritans or to the 1600’s.

The Vice Squad was the section of the Police who’s job it was to enforce such laws. You might find that your local police still has a Vice Squad, although in some places it’s name has changed. They enforced laws in regards to sex, including prostitution, they also enforced gambling and sometimes drug and alcohol laws. These things were vices, hence the name.

Liberalism and the Counter-Culture of the 1960’s came to view these crimes as ‘victimless’. A problem of morality and that the law should not be about morals, but that it should instead be about stopping people from hurting other people. That you should be free to do whatever you wanted as long as it did not interfere with another person’s freedom.

Traditionally, the law also existed to protect you from yourself, therefore there could not be a victimless crime. Hurting yourself was a crime, which is why suicide was once against the law. But the idea behind making these things illegal was not to punish people, the idea was to make people consciously think before they broke the law. It was not a murky area, it was crystal clear, this vice that you were about to commit was against the law. It was a mental barrier that had been placed there on purpose. The victim of these crimes was you and you needed to be protected from you.

Adultery most certainly is never a victimless crime, a husband or wife has been made the victim. It creates anger, jealousy, distrust, hatred and can lead to the breakdown of marriage, violence, even murder. For the community all of these things were bad. They were also victims and they need to be protected.

Instead of the law being on our side, instead of being protected from our own vices, we are instead told that these things are of no consequence. Rarely were these crimes prosecuted, normally because other ways were found to work around them. But they let everyone know in no uncertain terms what was right and what was wrong. That mental barrier was very important, it protected people and today it does not because it does not exist. Hurting yourself needs to be against the law.