Feminism is the Ladies’ Auxiliary of Liberalism. It likes to think of itself as a separate and distinct philosophy. But its job has always been to extend Liberal thinking from ‘men only’ to include women. What that means is that Liberal men support Feminism, because they correctly think of it as ‘their’ philosophy. Put another way, Liberalism and Feminism are in most regards the same philosophy.

Liberalism makes many claims about itself, many of them quite grandiose, however it is quite shy about many of its achievements. It does not like to talk about how it achieved its long list of ‘reforms’. In 1800, there was no civil divorce, women rarely got custody of the children, women couldn’t own property, they couldn’t vote and abortion was both a sin and illegal.

Today all of those things are legal, and they are regarded as great achievements that Feminism brought to the world.

So who made civil divorce legal? Liberal men did.

Who made no fault divorce legal? Liberal men.

Who made sure that women got custody of the children? Liberal men. 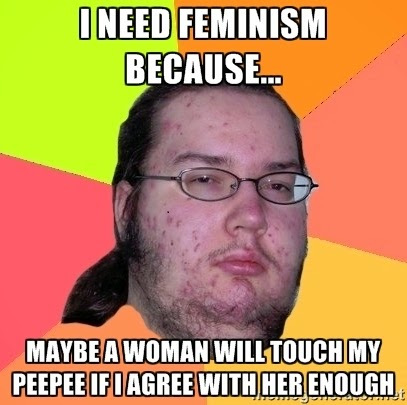 Isn’t Feminism supposed to be about female liberation?

But here is the dirty little secret of Feminism, it has hardly achieved anything by itself. It has always had men do the hard work while it took the credit.

Liberalism rejects human nature, man is not made in the image of God, man is self-made. Feminism says that woman is also self-made. In other words we are not part of nature, but outside and above nature. We can transform nature and ourselves. It also means that our natural desires are unnatural, because we are not part of nature, so it is impossible for us to have natural desires. Breaking up human nature is part of the Liberal and therefore the Feminist projects.

It does not matter whether something is good or bad for people. If a particular policy hurts women, that is neither here nor there, what matters is, is it good for the project? Is it good for creating the Autonomous Individual? That is what matters.

Feminism does not work to support or protect women, it serves a Master not a Mistress.

Its Master is Liberalism, and Liberalism’s aim is to destroy the world as it is and to create a perfect world. A Liberal world, the world of the Autonomous Individual.

Originally published at Upon Hope.  You can find Mark’s Subscribestar here.