Islam has clear instruction on what to do with the homos: 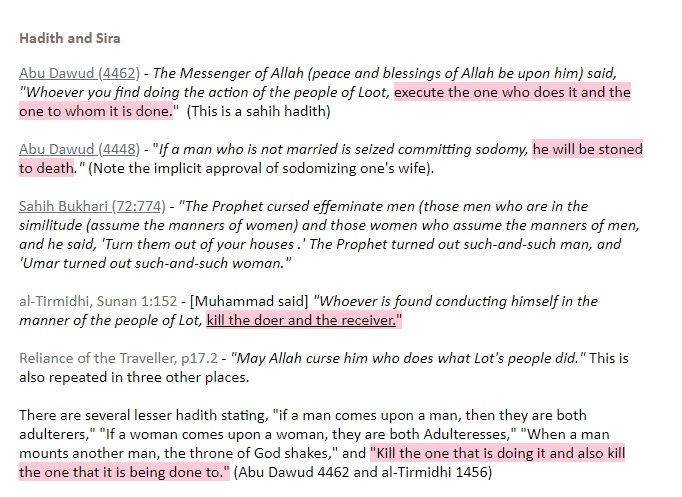 They prescribe the death penalty, this is an indisputable part of the Muslim religion (among other things) and they are not afraid to let everyone know this is part of their religion.

In “polite society” when people bring this fact up it comes usually with excuses from sodomite supporting Liberal communists, who like to use Islam as a weapon wherever possible, and “condemnation” from others, including Christians. Many Christians just cannot “believe” that Muslims would be so “barbaric” as to kill the peaceful “love is love,” gays. 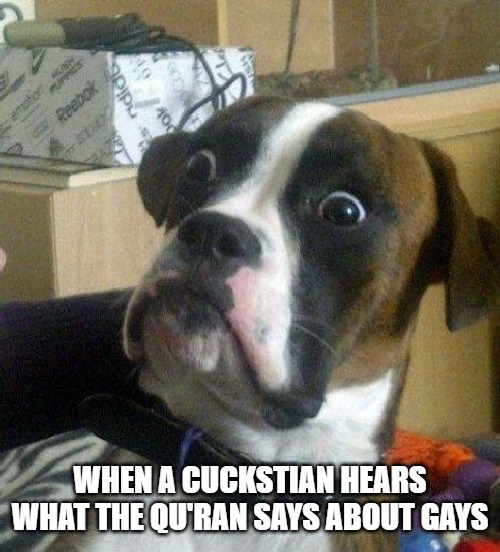 Jewish and Oligarchy propagandists have worked overtime convincing us all that “it’s OK to be gay,” and that we should just be more “tolerant” of their lifestyle choices.

This propaganda has been very successful over the last few decades; so successful that now most self-declared Christians truly think tolerating this disgusting sin is the “Christian thing to do.”

As though Christianity is now all about “tolerance” and “love” and “God hates hate” or something, “don’t fall to the dark side Goy! It’s the current year!”

This is a lie, God hates a great many things.

The Bible is chock full of His wrath and anger at humanity for our sinful and wicked ways, this is the whole point of Jesus Christ and His sacrifice. Adam ate the Fruit from the Tree of Knowledge and humanity fell into sin; then Christ came and died for these sins, thus His blood redeems us.

Now God will Save anyone who admits to Him that they are a sinner and puts their faith in Jesus Christ as the resurrected redeemer of all sinners. This is the whole point of Christianity, not that we are no longer sinners, but that God will forgive all our sins so long as we truly repent.

16 For God so loved the world, that he gave his only begotten Son, that whosoever believeth in him should not perish, but have everlasting life.” – John 3:16

This also mean Catholicism is a false religion and definitely not Christianity.

Despite dying for our sins, Jesus Christ did not ever say it was now OK to sin, nor did he say we should abandon the Law of Moses, in fact he said the exact opposite.

Jesus came to fulfil the Law not to destroy it.

The idea that we now have carte blanche to commit any sin we like, and that we should tolerate the worst sins imaginable, is a complete fabrication. As is the idea that the Old Testament Law of Moses is somehow now obsolete because “it’s the current year.”

God loves us so much he sent His only son to die for our sins, but you had better repent because if you refuse then He will not be happy.

So, what then does God actually think about the homosexuals?

Well, turns out He is very clear on the matter:

“Thou shalt not lie with mankind, as with womankind: it [is] abomination.” – Leviticus 18:22 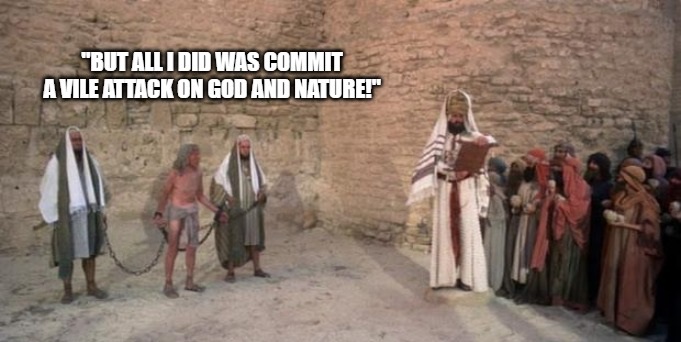 God has a little more to say on the matter, but it’s 2020 and we aren’t allowed to utter such things in public these days.

Lucifer von Blewmouth down at the day spa might not like it, and his Saturday night boyfriend has friends in high places. 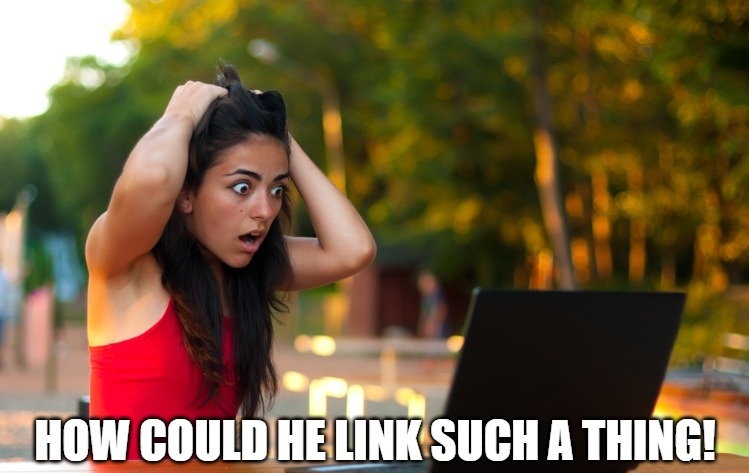 “But but BUT Matty! That’s just an old Jewish law! The New Testament is different! We are not as barbaric as they were!”

Firstly, not “Jewish” law, the Law of Moses who was leader of the Hebrews.

Secondly, yes, the New Testament says the same thing, as already mentioned, only now you have the gift of a get out of death and damnation free card:

If we confess our sins, he is faithful and just to forgive us [our] sins, and to cleanse us from all unrighteousness. – 1 John 1:9

Those who know the word of God and His judgement yet reject it are damned for eternity, but He forgives all sins if you ask forgiveness and put your faith in Jesus.

Sodomy is a horrible sin against God and the Natural Order, it violates parental property rights and the wickedness spreads if we refuse to contain it.

Thanks to the blood of Christ, sodomites have one chance at redemption; when they hear the true word of God, they must repent their evil wickedness and turn to Him as their guide.

If they refuse, God will give them over to a reprobate mind and reject them, and He will destroy any society that refuses to deal with this sin, and those who commit it, effectively. 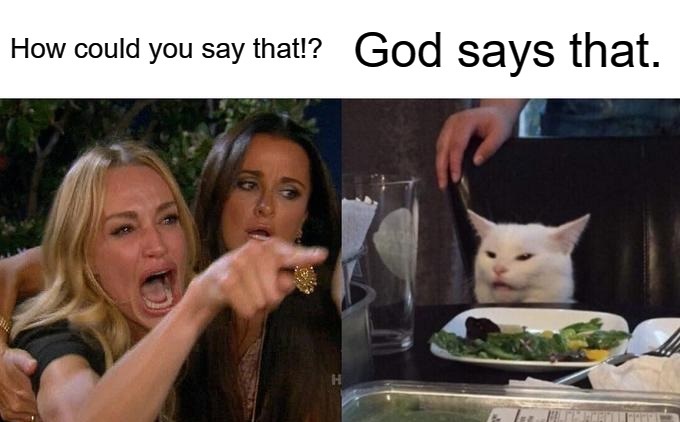 Have a look at the trajectory of society since we legalised sodomy.

If it was only a matter of “what stays in the bedroom remains in the bedroom” this might not be as much of an issue, but they bring their degeneracy into the commons.

Homosexuals started out asking for a little bit of “tolerance,” and for us to accept them “how they were born,” then within 50 years we are seeing grown men flash their nutsack at children in the classroom and 10-year-old boys dressing in drag, dancing in front of grown up homos for money.

We are seeing children sterilise themselves so that one day they might cut their own genitals off.

If this does not make you sick to your soul then your only chance is to repent and get right with God, because this is the deepest levels of disgusting.

It is the worst kind of filth.

The ruling oligarchy venerates this sin and forces us all to accept it through threats of losing our jobs, bank accounts, liberty or worse. They push the sodomite lifestyle on to us, lie that these sinners are “born that way,” then attack and threaten anyone who dares call it out as degenerate.

Thus not only is it filthy but it is the worst kind of evil and wickedness.

The story of Sodom and Gomorrah tells us exactly what God thinks of this degenerate, willing, disobedience of His Law.

He utterly hates it; he hates it so much that he will destroy any society that engages in it, and he hates it because he loves us despite our sin. If he did not hate this perversion, he would not love us. 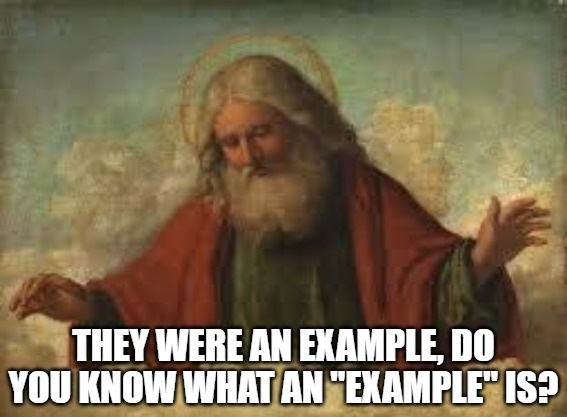 Now, some people are going to say, “zomg, he’s saying kill all the homos,” but no that is not what I am saying. If you are a Christian do not go out and start stoning homosexuals, or killing them, or assaulting them for their sin because God commands it.

God does not want us to do this; we are to follow the law of the land, forgive sinners, and preach his word without fear:

17 And take the helmet of salvation, and the sword of the Spirit, which is the word of God:
18 Praying always with all prayer and supplication in the Spirit, and watching there unto with all perseverance and supplication for all saints;
19 And for me, that utterance may be given unto me, that I may open my mouth boldly, to make known the mystery of the gospel,
20 For which I am an ambassador in bonds: that therein I may speak boldly, as I ought to speak.” – Ephesians 6:17-20

The enemies of our Father might control the institutions, for now, but that does not mean Christians should remain silent in the face of sin and abomination.

God commands all Christians to have faith in Christ and call out all evil.

Calling out the sodomite sympathisers who right now rule over us is a command from God, to all of us, if we are to call ourselves truly Christian.

God said to expect persecution for preaching His word, “Marvel not, my brethren, if the world hate you.”

It is NOT “OK to be gay,” it is rotten, and those who would force us to accept this abomination are the worst kind of evil. 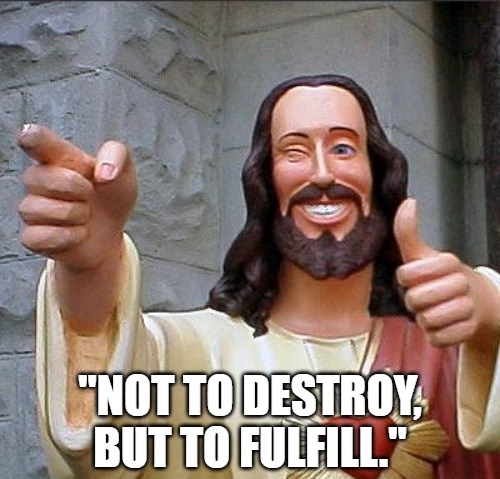