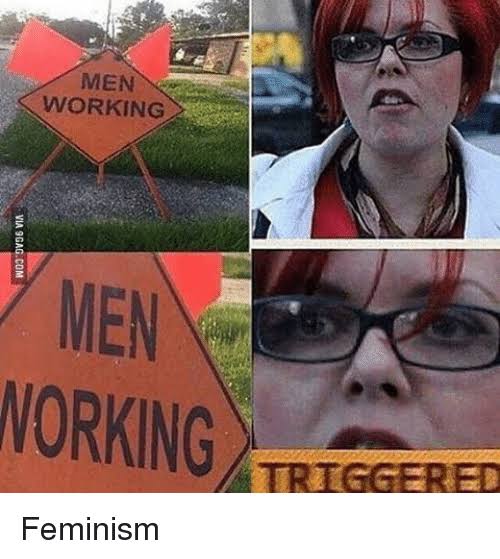 No matter what your political beliefs are, if you went to a party and you met a man who worked and his wife who stayed at home and looked after their children you wouldn’t think much about it, you would probably think of them as a nice, boring and normal couple. But for decades we have had a push to destroy this nice, boring and normal couple. To get her out into the workplace so she can compete against him. But the cost of such a society is high, economically, socially and personally.

I would like to state right off the bat that women have always worked and they have worked hard. Both in the home and outside and that should not be forgotten. But there is a great difference between need and desire. In the past women who worked needed to work, many still do. It is the desire to work that creates problems because nearly every woman who works for desire is competing against a man. Those who work because they need to work may also be competing against men but most will seek work in jobs where they are needed and by default men are scarcer.

If you want to see quite starkly a society in which male employment is not seen as important, one of the most visible is Black America. One of violence and anti-social behaviour, one of high rates of illegitimate births and low marriage rates and high divorce rates, one of macho and peter panism, where the difference between men and boys is size and often not behaviour. If the men in this community had full time permanent jobs with a decent rate of pay I believe that these problems would start to sort themselves out, not totally but in large part. Unfortunately what has happened to Black America is the future of the entire Working Class worldwide, unless something is done to stop Liberalism. Certainly Black America is not alone in having these problems but they are the most visible, and here we can see the failed attempts to fix these issues and why they will constantly fail. All over the Western world we see women being given preferential treatment in employment, some of this is due to their education, something I’ll do a post on at a later date.

Jane Austen wrote “It is a truth universally acknowledged, that a single man in possession of a good fortune, must be in want of a wife.” The only thing I would add is that by fortune I would take it to mean that a man has enough income that he can look after his own needs and still has money enough to have realistic plans for the future. But unless a single man wins lots of money on the lottery or some other form of gambling, inherits or steals the money, he needs a job. One that pays enough for him to live on and some extra so that he can save and start to plan for the future. It also needs to be permanent and not casual or stopping and starting. Once these conditions are met then we will start to see benefits. He will be self sufficient, he will gain confidence and be more appealing to women. He will often desire permanence and will want to marry and have children. The present and the future are happening together.

But when a man is denied a permanent job, he will not have a regular and sufficient income. He will not be in most cases able to have a permanent relationship and if he has children they will not be born within marriage and he will in most cases be unable to support them himself. So instead of him having a job and looking after his own children, other people with jobs will be taxed to support his children. Talk about uneconomical!

When women work the opposite happens, the more money they have the less men are available for them to marry as they still want what nature has always wanted them to desire, a man capable of looking after them. So if a women makes $100,000 it doesn’t really matter what a man makes as she is quite able to support herself and him. But that is not what she wants, it is not what nature wants either, the man in her life must be able to look after her, so roughly $100,000 is now the minimum income required to date this women. Of course women are individuals and you will find exceptions but it must be remembered that is what they are, exceptions.

A world where women are 50% of wage earners is a world in which Traditional Marriage is constantly under threat. Economically, socially and personally the best arrangement is for a man to work in a full time permanent job and for his wife not to work. Economically, double income families add to the cost of everything. Houses cost more, education, particularly Higher Education cost more, even insurance costs more as everyone factors in that everyone has a dual income. So instead of getting ahead of the rest you’re merely keeping up. Unless one of you stops working, then you’re falling behind. Economically, double income families make no sense. For those who never marry it puts much of life out of reach.

For Traditional Conservatives supporting Full Male Employment has no drawbacks. It satisfies us as being economically sustainable, socially it creates families and supports them and personally it supports men being men and women being women instead of pretending that we are all just equal and the same. While those who are not Traditional Conservatives will scoff and talk about discrimination, why isn’t it that they never want to discuss the discrimination against the men and women who can never marry?