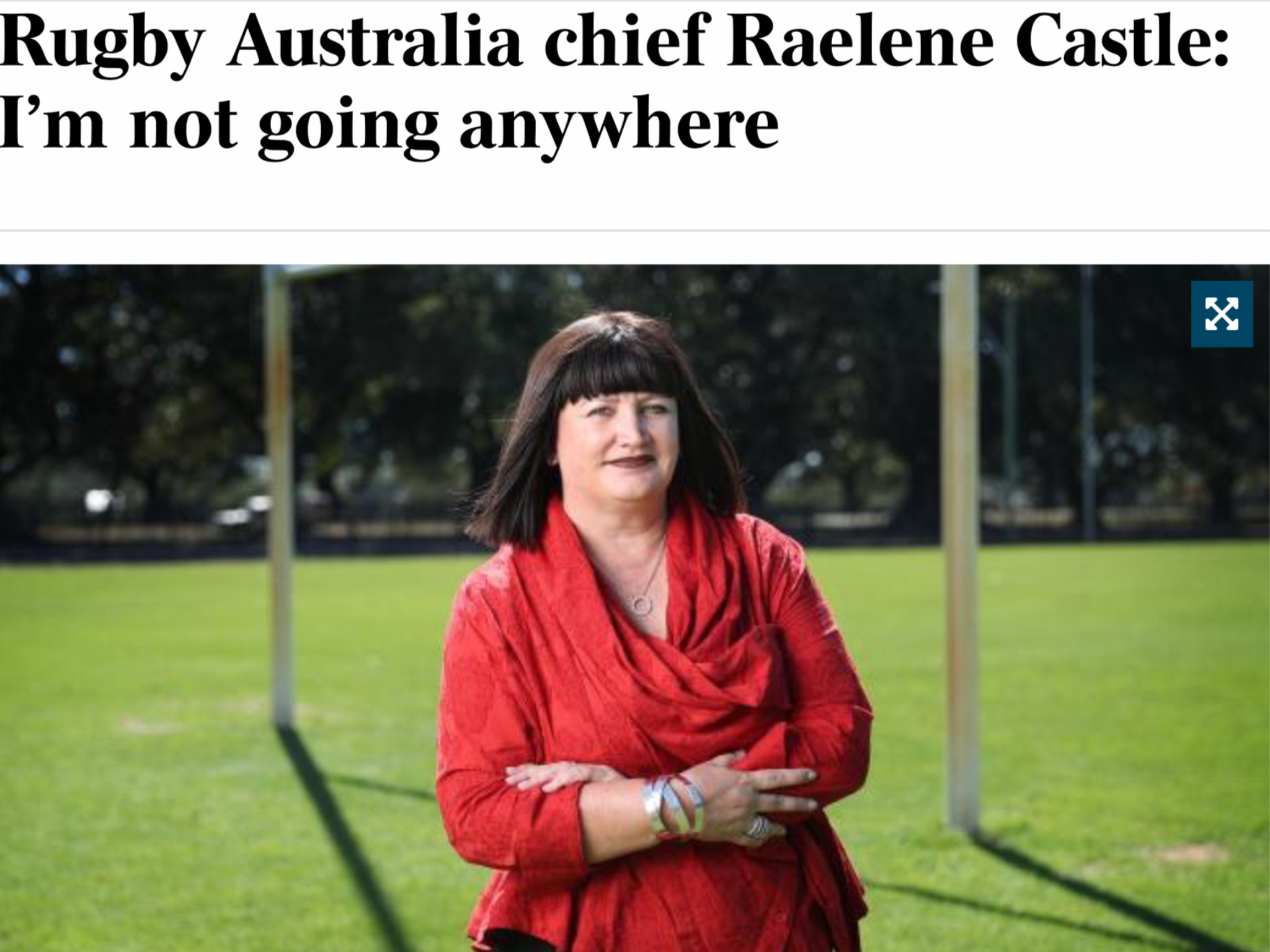 Raelene Castle had so much fun forcing a bunch of Pacific Islanders to accept that the anus is a sexual organ that she wants four more years.

Embattled Rugby Australia boss Raelene Castle has rejected any suggestion the code is in crisis, ­insisting she will remain at the helm for at least the next four years as she completes a strategic overhaul.

The chief executive, whose reign has been overshadowed by a string of off-field dramas, said the administration’s performance had been unfairly maligned by the Wallabies’ lacklustre performance at the World Cup, where they limped out at the quarter-finals stage, and that the sport was actually in good health.

Get ready for some amazing doublespeak from Big Fat Sister:

“People say rugby is in crisis. There is no crisis,” she told The Australian.

“That’s the world we live in, but there are a lot of building blocks that are really strong in rugby and continue to deliver.”

War is Peace. Diversity is Strength. Winning is losing. Losing is winning. Everybody is a winner.

Her comments come amid ­increasingly vocal dissatisfaction with the Rugby Australia board, given its handling of former star Israel Folau, the axing of the Western Force and its inability to negotiate a new pay-TV broadcast rights deal.

Chairman Cameron Clyne has already indicated he will step down at the next AGM in March, along with three other board members, offering an opportunity for renewal.

So much for those building blocks. Raelene is rightly in trouble. She forced out star player Israel Folau for telling the truth and the team has not recovered. Most Australians, and certainly most Australian Rugby fans are on his side, not hers. Her apologists can whine about so-called sexism all they want but at the end of the day she made a disastrous call and she should pay for it.

Naturally, she is doubling down:

Ms Castle defended the ­decis­ion to punt Folau, saying Rugby Australia would be in greater turmoil if he had been ­allowed to stay. But she still hoped they could resolve the matter when they meet in Melbourne on Monday for a settlement conference.

“I don’t think you can go through an issue like this and not think there were some things you could have done better — of course there are — but the decis­ion to seek his termination was the right one,” she said.

“Subsequent public comments by Israel over the past few weeks — if you play that through, of him still being a Wallabies player inside­ Rugby Australia — would have sent this organisation into ­another backflip. We took a stand on what was right, and we will work through that process in court.”

Never mind that activists have gone out of their way to publicise Folau’s comments and the teachings at the church he attends, and that his comments are entirely Biblical. Raelene also appears confused over whether they will have a “settlement conference” or “work through that process in court”.

“We took a stand on what was right.”

In the current year, homosexuality is “right”. Not merely tolerated. Not embraced. Right. Homosexuality has been elevated to a moral value. It is inversion of Satanic magnitude.

It is a situation which is simply not sustainable. It is no coincidence that Australia has gone from a country where its Rugby is played by Aussie men and run by Aussie men, and homosexuality is considered a sin, to a country where homosexuality is considered “right”, and our Rugby is played by Pacific Islanders at the behest of a witch.

We have become weak and incoherent. The barbarians are inside the gates, degeneracy is rife and our women are out of control. It will soon become acceptable due to demographic replacement for the Australian Rugby team to do a haka.