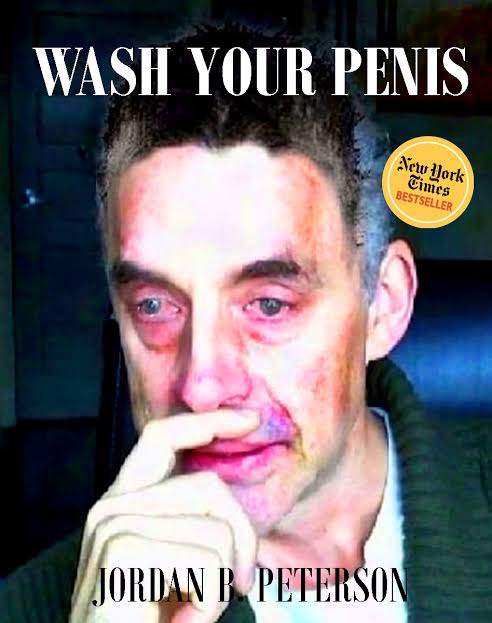 My article on Peterson was cross-posted at XYZ magazine. It had a lot of comments, particularly on Facebook. The Peterson fan boiys descended en masse to defend their poor great guru from the dastardly attacks of the horrible Adam. Which is exactly what the editor of XYZ, David Hiscox, and I expected. It’s happened every time. As I commented to David, Peterson could run naked down the street while drooling and screaming at the sky and he would still get a free pass.

Previously the ad hominem attacks employed against me when I took a shot at Peterson were along the lines of me being jealous of the great guru. But it’s kind of hard to be jealous of an obvious raving lunatic, so his defenders were forced to get creative and choose other avenues to suit their needs. Chief among them was the accusation that I do not understand mental illness, the apparent inference being that my accusers do understand mental illness.

Let me make it quite clear that I do not care one whit for the mental illness industry. True mental illness requires lifelong care and isolation from the general public. Everything else under the mental illness umbrella is pure poppycock. In general it is simply an excuse to justify a life of laziness or cowardice in some form or another. Tragically, this is often at the expense of the newly created “mentally ill”. I would class children in this bracket who are force fed anti-depressants by their parents who are either too lazy to raise them properly or want the public virtue of being able to boast that their kids are “special”.

So not only do I not understand this supposed mental illness, I simply do not care. Peterson attempts to hide behind this so as to avoid criticism of his work. His supporters seek to create the same situation in their ad hom attacks. But this only works if his critics buy into the bullshit and I most certainly do not.

Another replacement for jealousy is the new accusation that I am an angry angry man. Only a very angry man would react the way that I do. Proper people, acceptable people, do not criticise poor defenseless individuals like Peterson when they are having a bad time. Where is my humanity, they drearily condescend. In their world it would only be possible to criticise Peterson when all positive factors were aligned in his favor. But even then, you must never actually be effective in your criticism; just go through the motions, there’s a good chap.

Once again, I don’t care. I didn’t criticise Peterson for his personal circumstances, I criticised him for how those circumstances directly reflect on what he claims in his professional life. If Peterson were to have some sort of accident, a motor vehicle accident as an example, the thought would not even enter my mind to criticise the man. Peterson’s defenders assume ill will in my actions because the alternative is too dark and complicated for them to even approach. Their hero must be protected at all costs because his fall is their fall as well.

Connected to this is the subsequent accusation that I have an axe to grind with Peterson or that I have a “deep and seething hatred” for the man. Nothing could be further from reality; I care not one whit for Peterson. He does not feature in my daily, weekly, or monthly life in any way, shape, or form. To be fair, this accusation is rolled out on a regular basis. A year or more will go by before Peterson does or says something notable and I write about it, but suddenly once again I have an axe to grind with our poor great guru. I suppose the next step will be the accusation that I am obsessed with Peterson. Still waiting for that one, folks. You all gotta NPC better.

But my most favorite comment I have left for last. And I will reprint it in its entirety. From one “Bronson” over at XYZ.

“Adam has great material about many topics. Howeve I recall that he initially endorsing Dr Peterson as an alpha based on the Kathy Newman interview without looking into what he, Peterson, had done prior. In othercwords acted blindly in doing so which he now projects onto others.

“If he had he might have realised that JBP while making some contentious politically incorrect arguments was no alpha male nor ever claimed to be one! Instead JBP was inclined to waffle and pussy foot around most issues and back away from commiting to a side. He was Ok if he stuck to a script but off script or commenting on issues outside of his academic field, e.g. statistics or IQ, JBP was no authority and that was obvious in the early days.

“Then Voxday pointed out how JBP had been wrong in arguing about the statistical distribution of Jewish IQ and JBP dug himself into a hole on his mistake which is when Adam realised he had been wrong to have swallowed the idea of JBP as being an alpha male. Realising JBP was soft seemed to provoke the bully in Adam who posted a retraction of his initial endorsement and instead launched a disturbing personal attack on JBP’s manhood. This attack somehow made it to JBP’s attention who responded with a tweet indicating his hurt thus vindicating Adam’s assessment of him as being a weak man and Adam boasted of having driven a stake into JBP’s heart and how JBP’s wife deep down would agree.

“Adam was getting rid of his own disgust at having blindly endorsed a weak JBP while at the same time he was bullying JBP into stepping aside from the role which he had accepted of being an advisor to men about how they should approach life. Ed Dutton recently did a video on bullies and how they perform a role in ejecting weak links from a group and so help the group survive, Ed’s constant background idea.

“Not my way of behaving and still disturbing but one must also question those on left wing media who sang the siren song to tempt JBP into a role he was ultimately doomed to crash and burn in.”

This is wonderful as I am now a bully who once loved Peterson so very much but who then became the tortured and scorned ex-fan on discovering that Peterson was not the great guru. Brondon apparently has access to my personal motivations and as such he feels compelled to publicly analyze me. He wraps it all up in a neat little convenient bow and wha-la! He has effortlessly slayed the horrible dragon, Adam.

I took quite some comfort in this long winded and false comment. Such an attempt to rewrite the great book of what actually happened tells me quite plainly that once again I am over the target. The screeches of the NPCs have been quite delicious but also very revealing.

David Hiscox wrote me this email about the comments:

“I always like the ratio of comments to likes with Peterson pieces – 75:23 in this case. How a guy can refernce Solzenyztin so frequently yet completely ignore what he says about the Jews beggars belief. Just when you think the masses are redpilled.”

I replied that the masses will never be red pilled. That is what makes them the masses. Which is a red pill in of itself. So keep on piling on. The NPC attacks give me strength and vigor. The point of my article was to point out that the blind servitude with which people follow Peterson is unseemly and counter productive. So thanks for proving it for me with your collective actions. You’re welcome.