Whenever the left get really upset at losing they use the word “backlash” to explain away the fact that popular sentiment is against them. When they use “backlash” twice in the same screenshot, you know it’s epic: 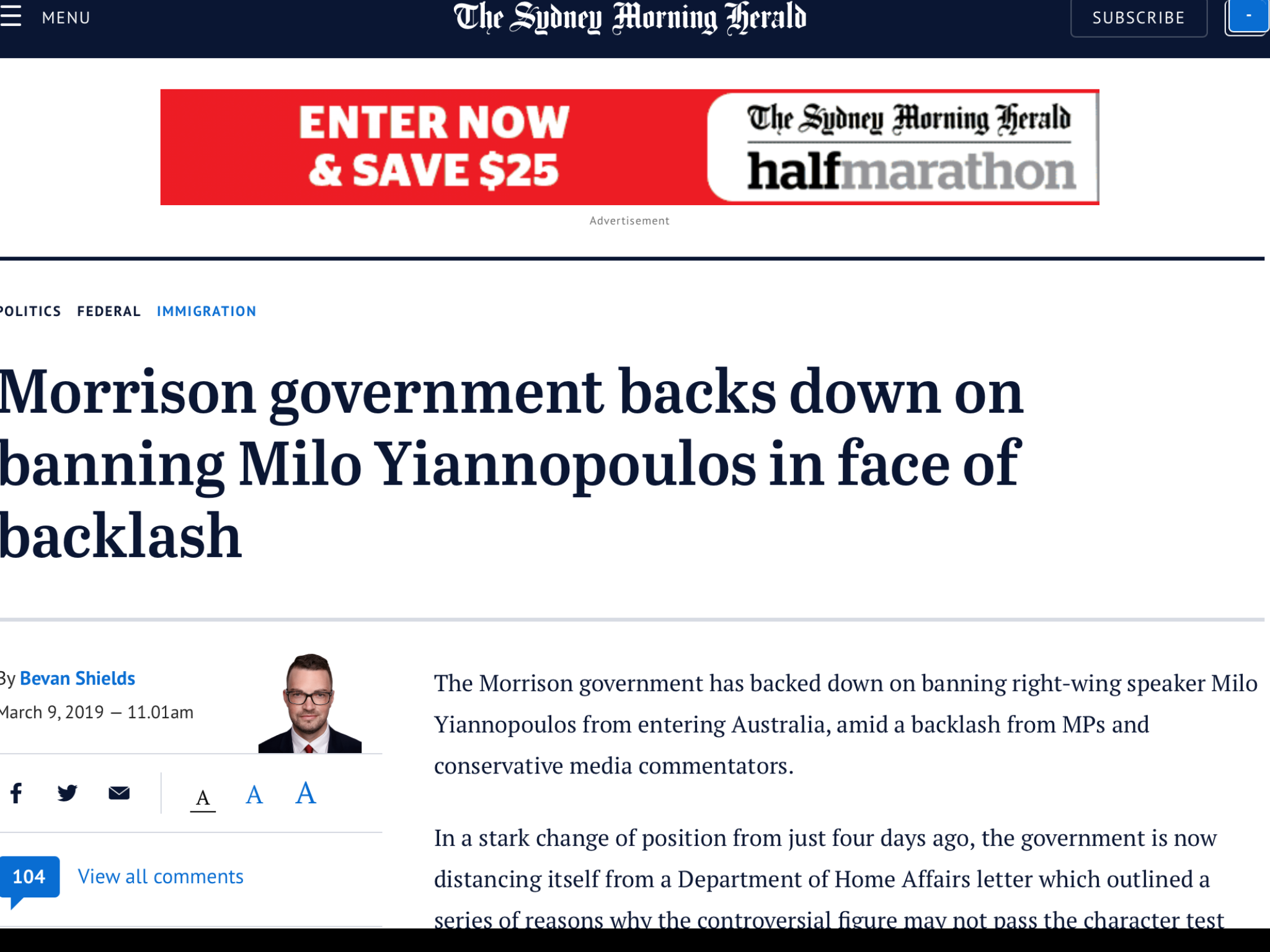 The Morrison government has backed down on banning right-wing speaker Milo Yiannopoulos from entering Australia, amid a backlash from MPs and conservative media commentators.

In a stark change of position from just four days ago, the government is now distancing itself from a Department of Home Affairs letter which outlined a series of reasons why the controversial figure may not pass the character test and should not be allowed into the country…

Senior members of the government were earlier this week satisfied with the decision to block Mr Yiannopoulos from returning to Australia for a speaking tour in 2019, but Immigration Minister David Coleman will now personally approve the visa.

A government source said Mr Coleman strongly disagreed with many of Mr Yiannopoulos’ views and statements but had reached the view that someone should not be banned because people disagree with them and may protest in response.

The initial push to reject the visa was met with a furious response from pro-free speech Coalition MPs, One Nation leader Pauline Hanson, and some media commentators including Sky News host Andrew Bolt.

This is called The XYZ Effect. The antisemitic homophobes at the ADC have lost. We, ie, The XYZ, will determine who comes into this country and by what means. In this case, The XYZ and others in the independent media have determined that a homosexual Jew who is married to a black man, supports a Muslima running as a candidate for a supposedly nationalist party, and who argues explicitly against white European nationalism can come here to speak. We assume he will arrive on a personalised jet modified to the shape of a penis or something.

Anyway, the passive aggressive narcissists at the SMH left this little misrepresentation at the end of their article, just to make it clear they think Milo must have soap fantasies:

In June last year Paypal suspended Yiannopoulos after he used the online payment system to send $14.88 to a Jewish journalist. The number 1488 is used by white supremacists and neo-Nazis because ’14’ represents the mantra of securing a future for white children and ’88’ represents “Heil Hitler”.

We’ve already debunked this one, but here it is again: