Numbers were down but violence was up yesterday as several thousand protesters conducted what may have been an illegal anti-Australian march through Melbourne. While last year’s so-called “Invasion Day” event is claimed to have numbered 25,000 people, according to the Daily Mail, yesterday’s sprawl constituted about a fifth of that number.

There have so far been no media reports of the presence of Tarneen Onus Williams, who was last year reported as saying she hoped Australia would “burn to the ground”, and there has been little mention of the Warriors of the Aboriginal Resistance group to which she belonged.

It appears the rally may have been meant to be quarantined to the steps of Parliament House on the T-intersection of Bourke Street and Spring Street in Melbourne’s CBD, but according to the Australian, the angry mob broke through a police line to march down the route which had been assigned for the real Australia Day March:

“In what was a mostly peaceful protest, the crowd did have to start their march at the top of Bourke Street by pushing through a police line. As the group started marching, uniformed officers linked arms and formed a line, a rally organiser on a vehicle-mounted speaker saying it was because of the van. “Let us through, let us through,” the crowd shouted, the officers shortly making way for the march.”

Thus, it is unclear whether or not the anti-Australian marchers had permission to march down Bourke Street and Swanston Street.

Many offensive signs were brandished by the protesters. While some disparaged Australia and Australia Day: 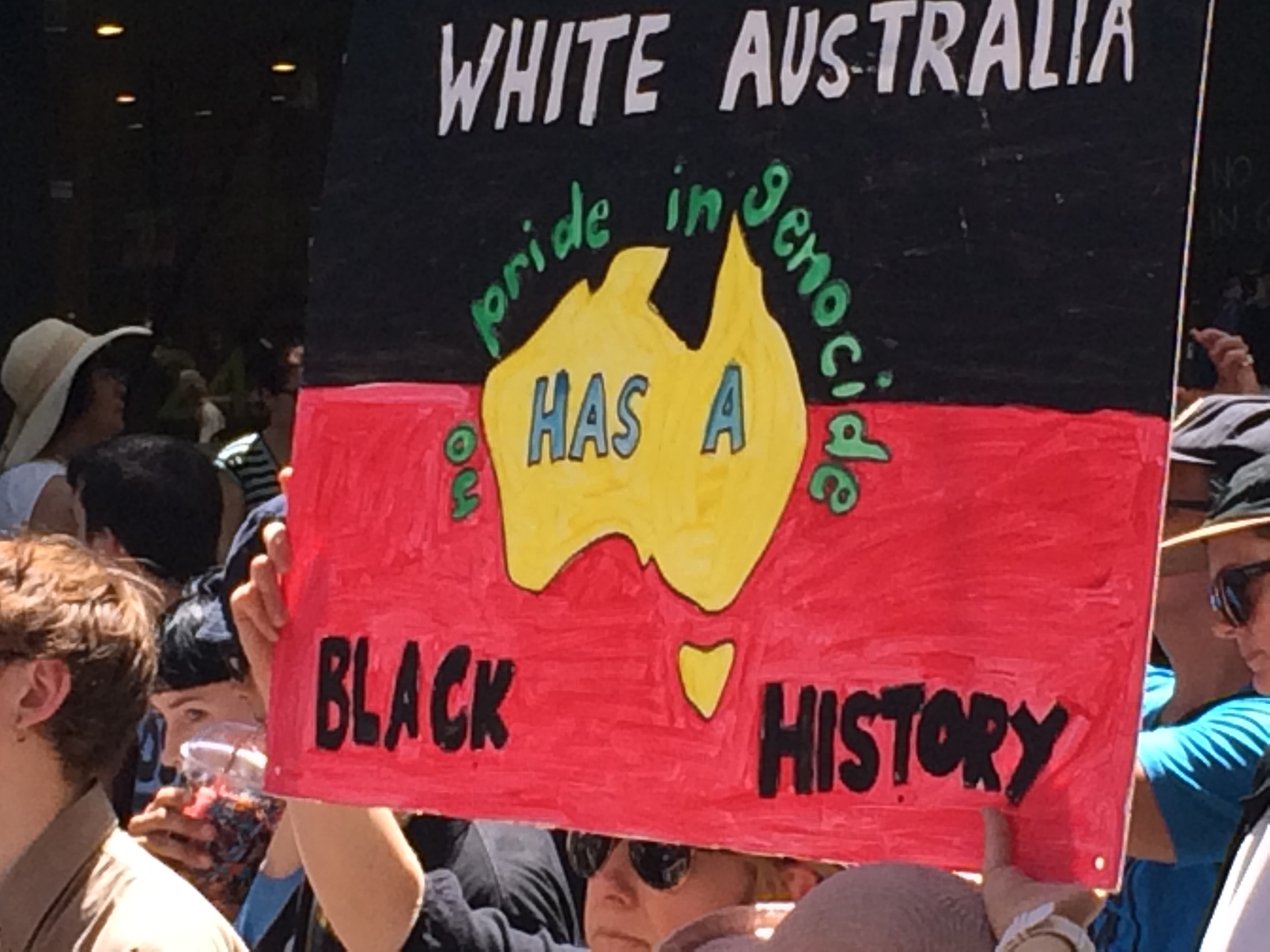 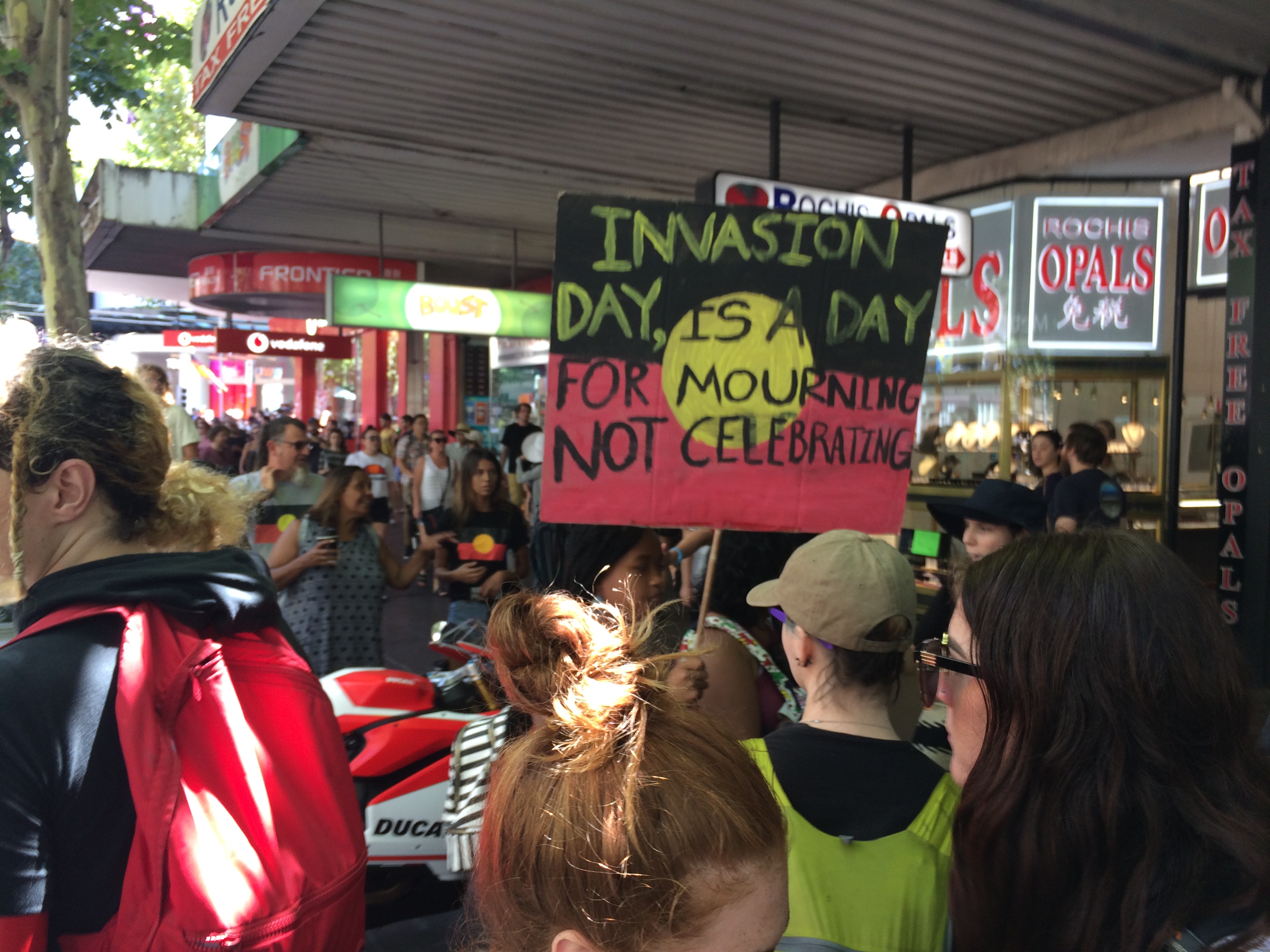 And disparaged white people in general: 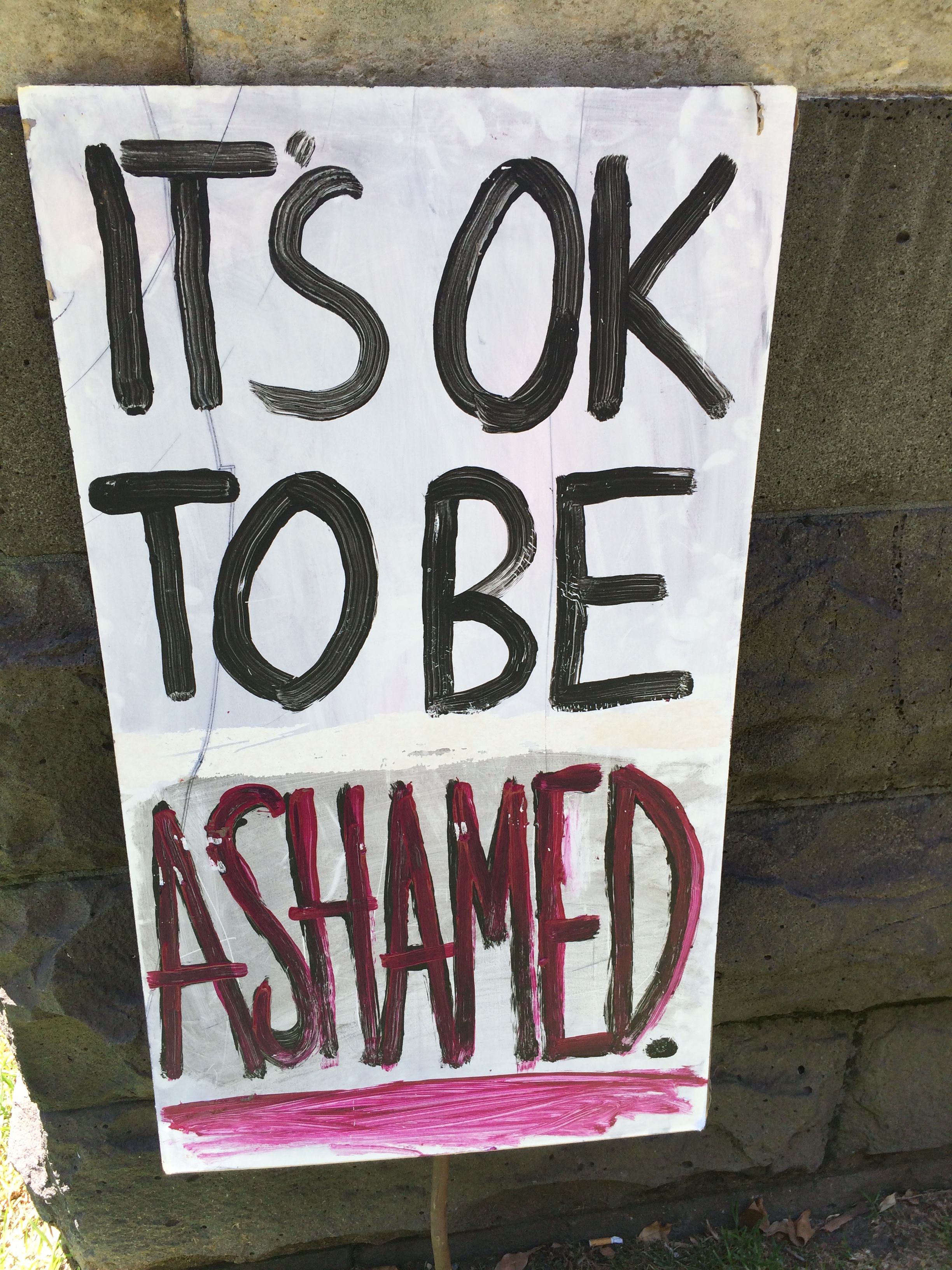 Others defaced the Australian flag: 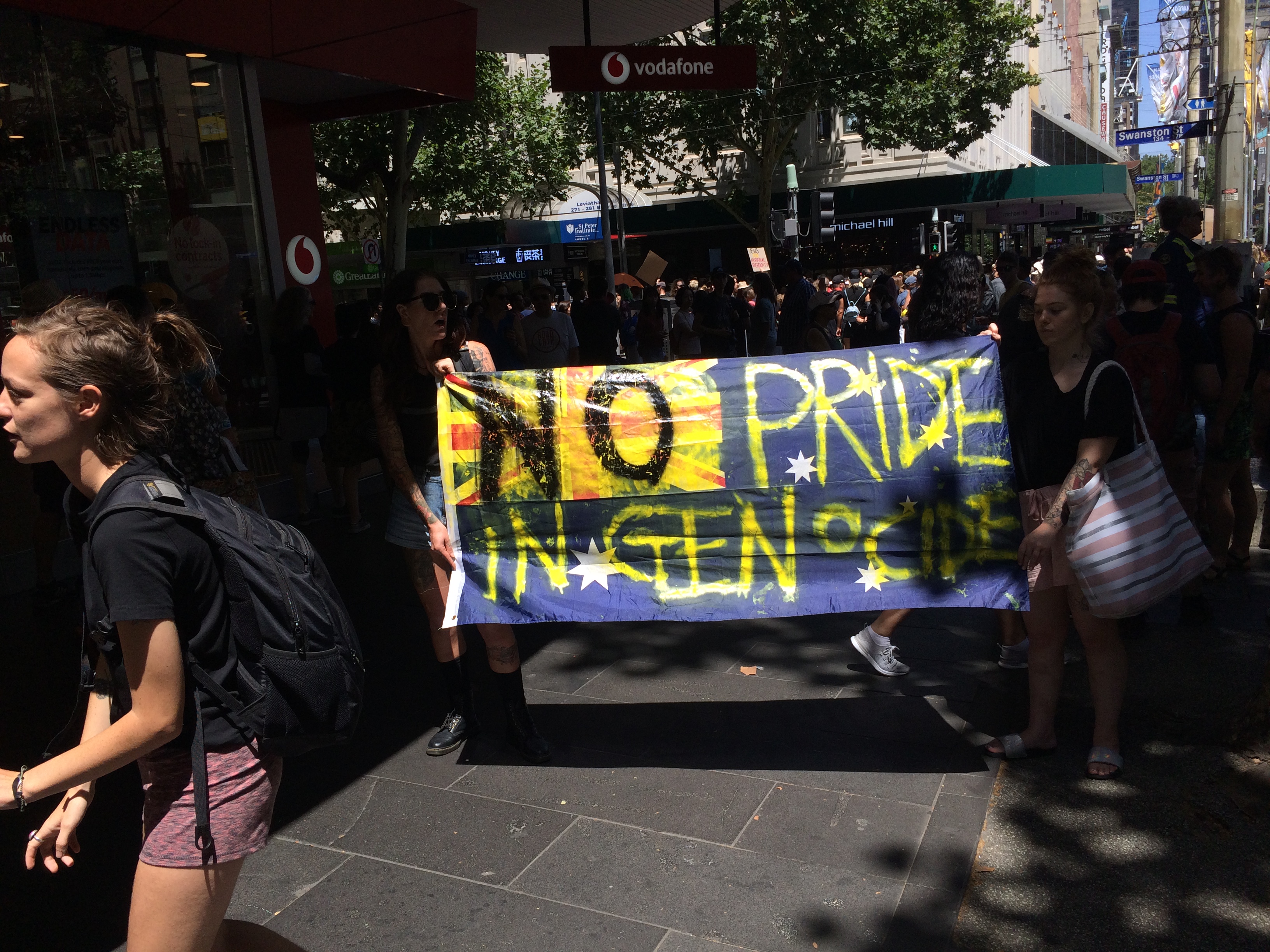 And dared to defile the name of the ANZACs: 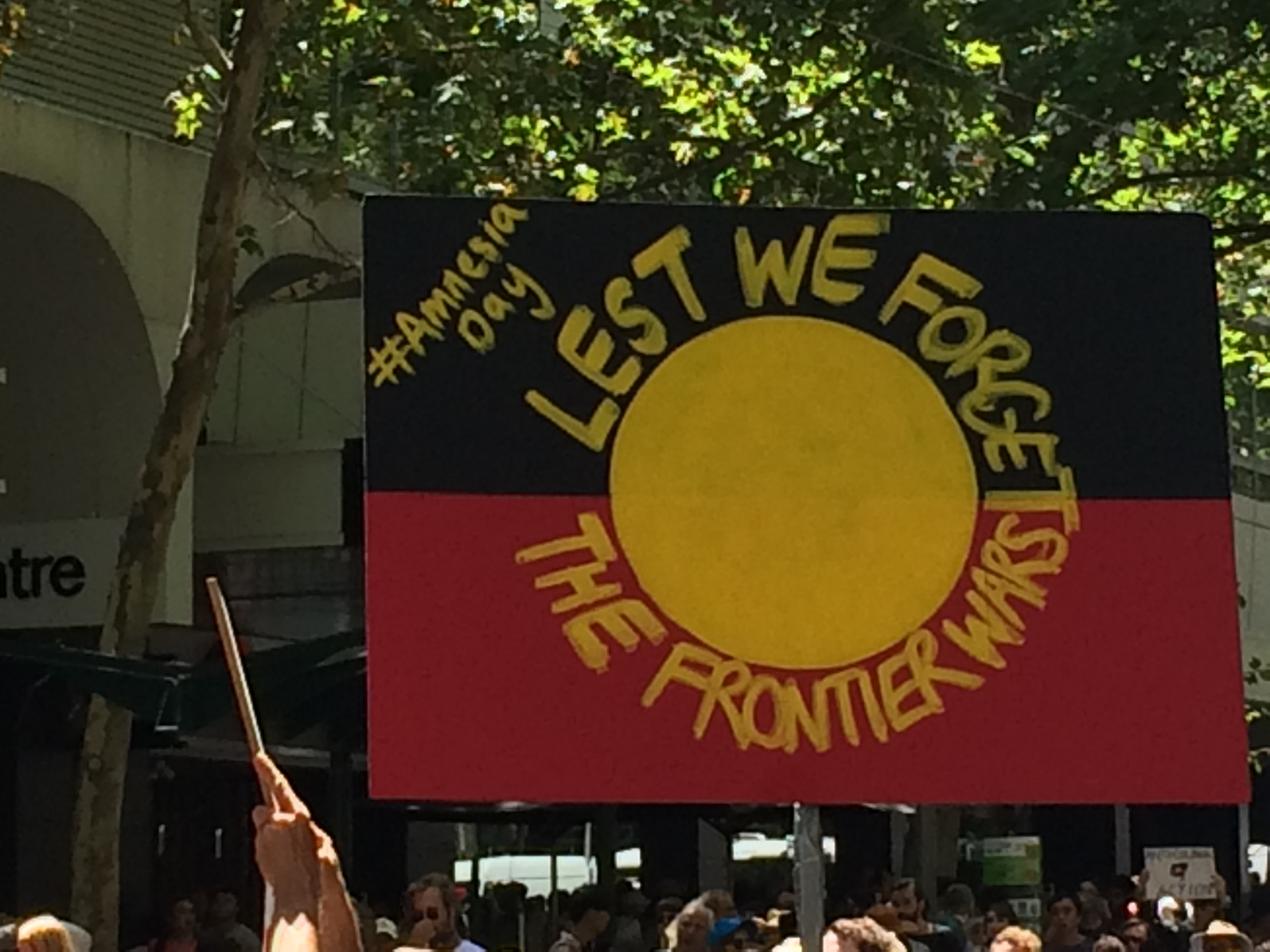 Marchers in the anti-Australian march payed no respect to what were supposed to be barriers between march participants and audience, fanning out across both sides of the street.

As such, XYZ reporters found themselves surrounded by a number of Marxists: 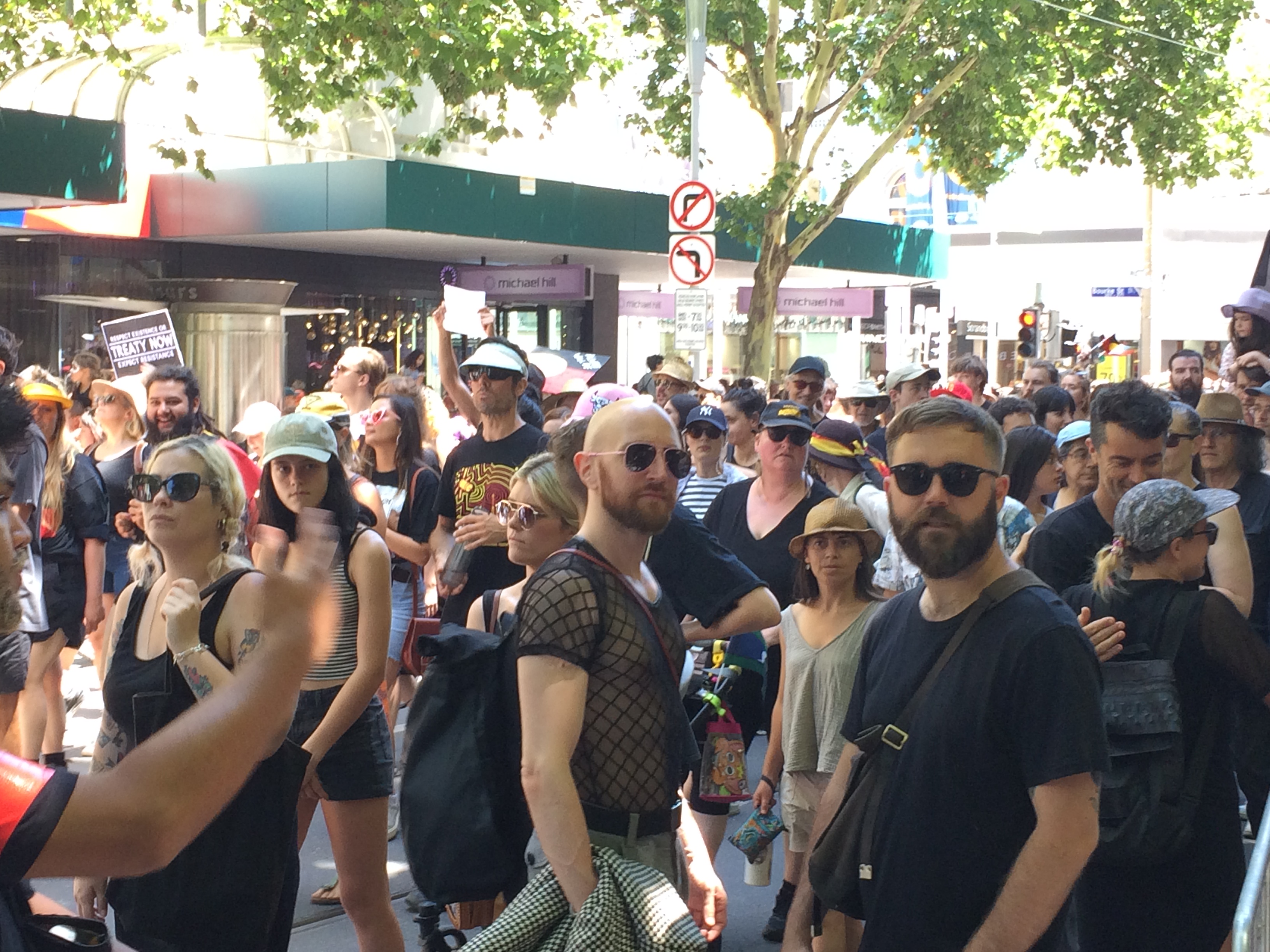 Who demanded that we stop filming and taking photographs of them: 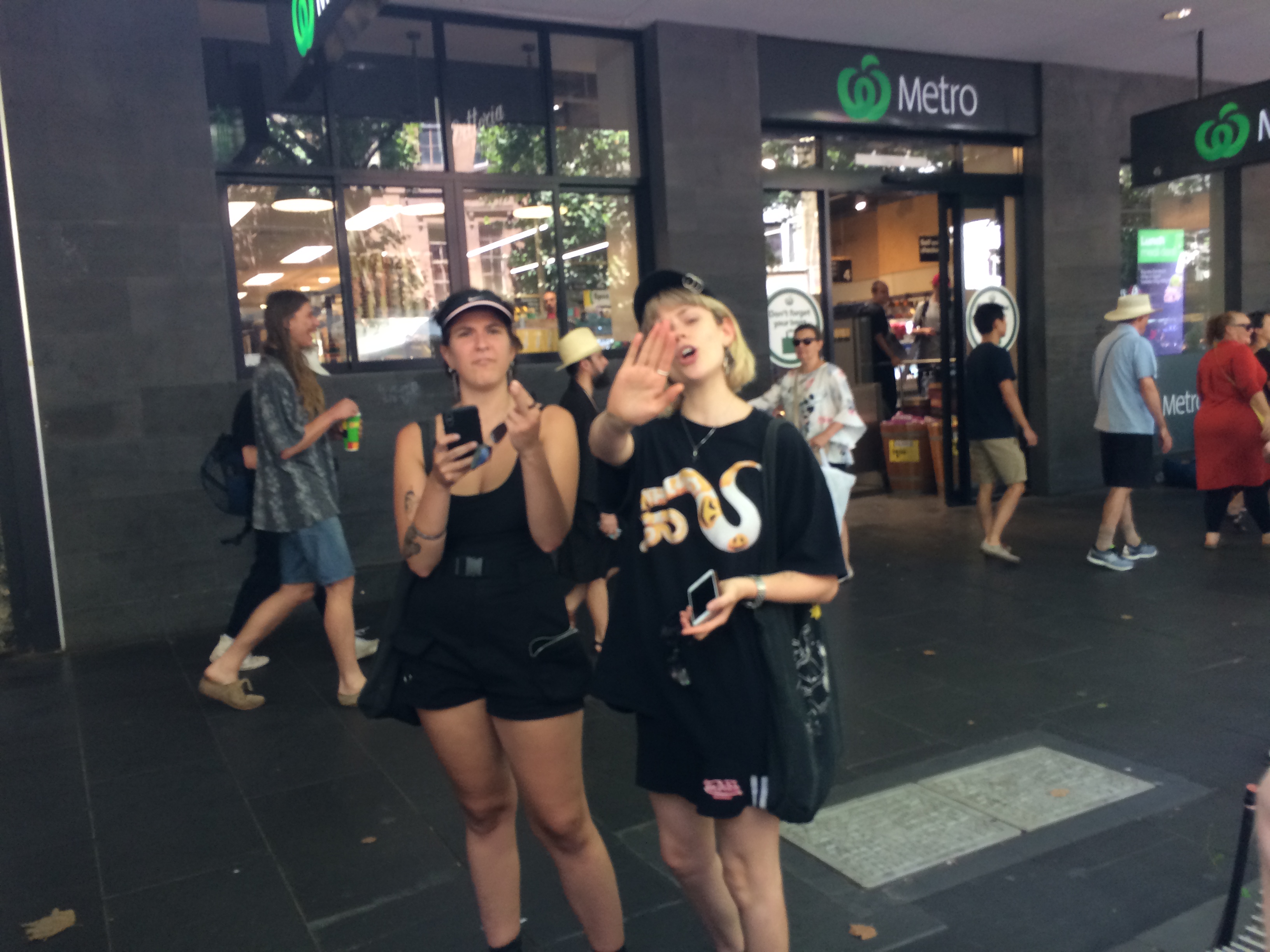 Despite the fact that they were also filming and photographing XYZ reporters: 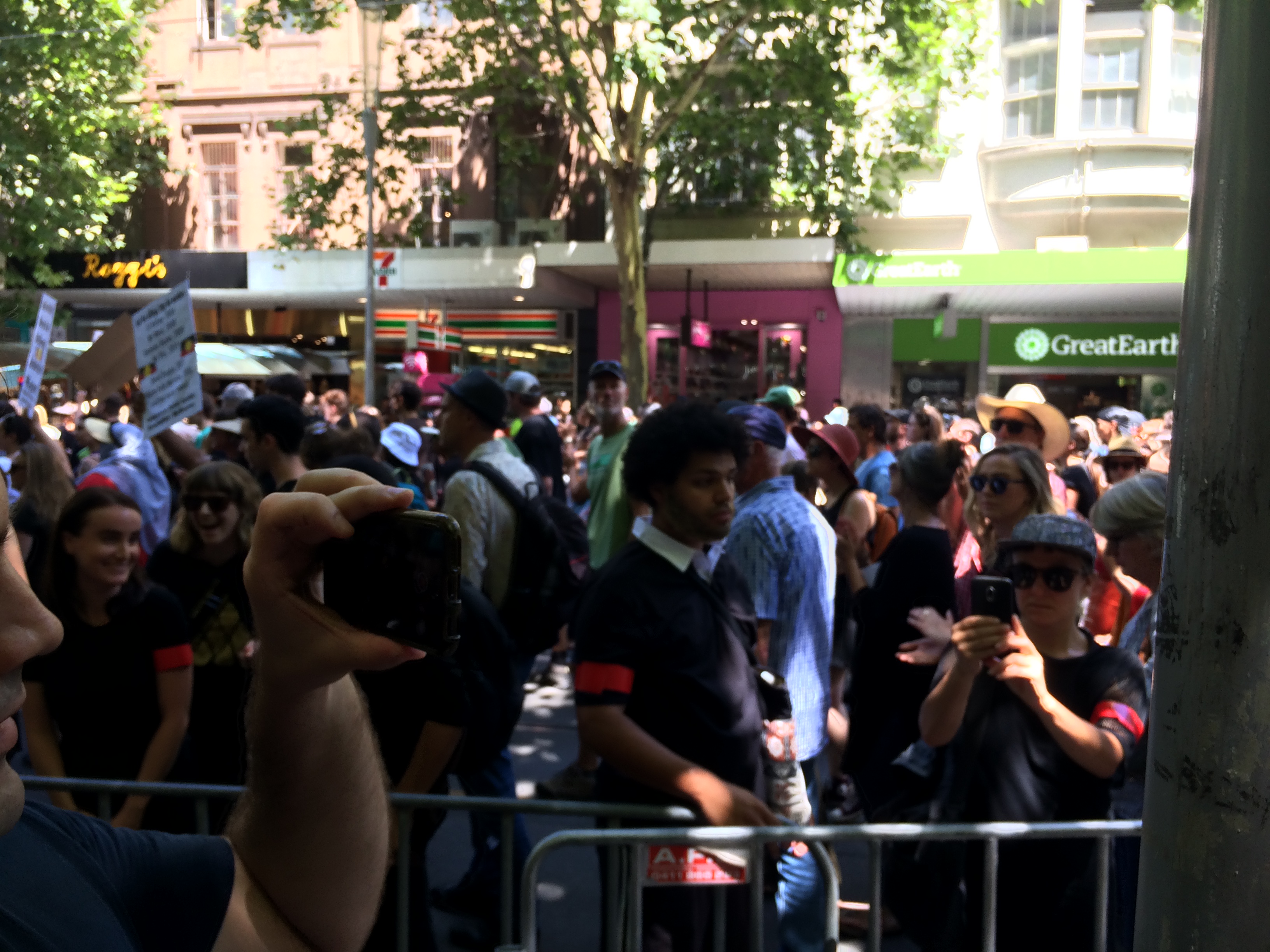 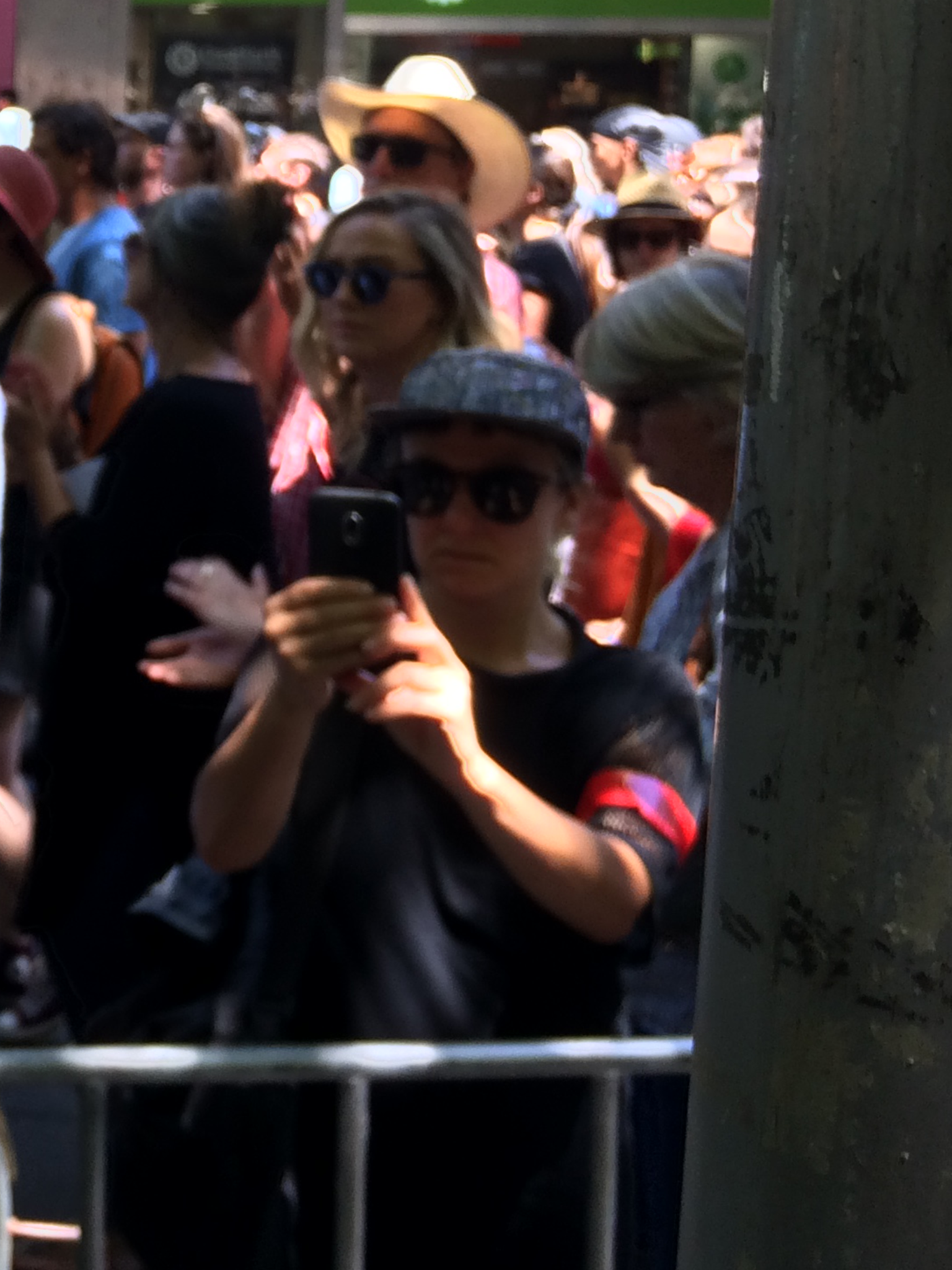 A bizarre confrontation followed in which one XYZ reporter was assaulted and another had water thrown on him, while what appeared to be assigned marshals feom the anti-Australian protest attempted to obstruct the media’s view of the protest. These marshals were dressed in black shirts, and wore red armbs: 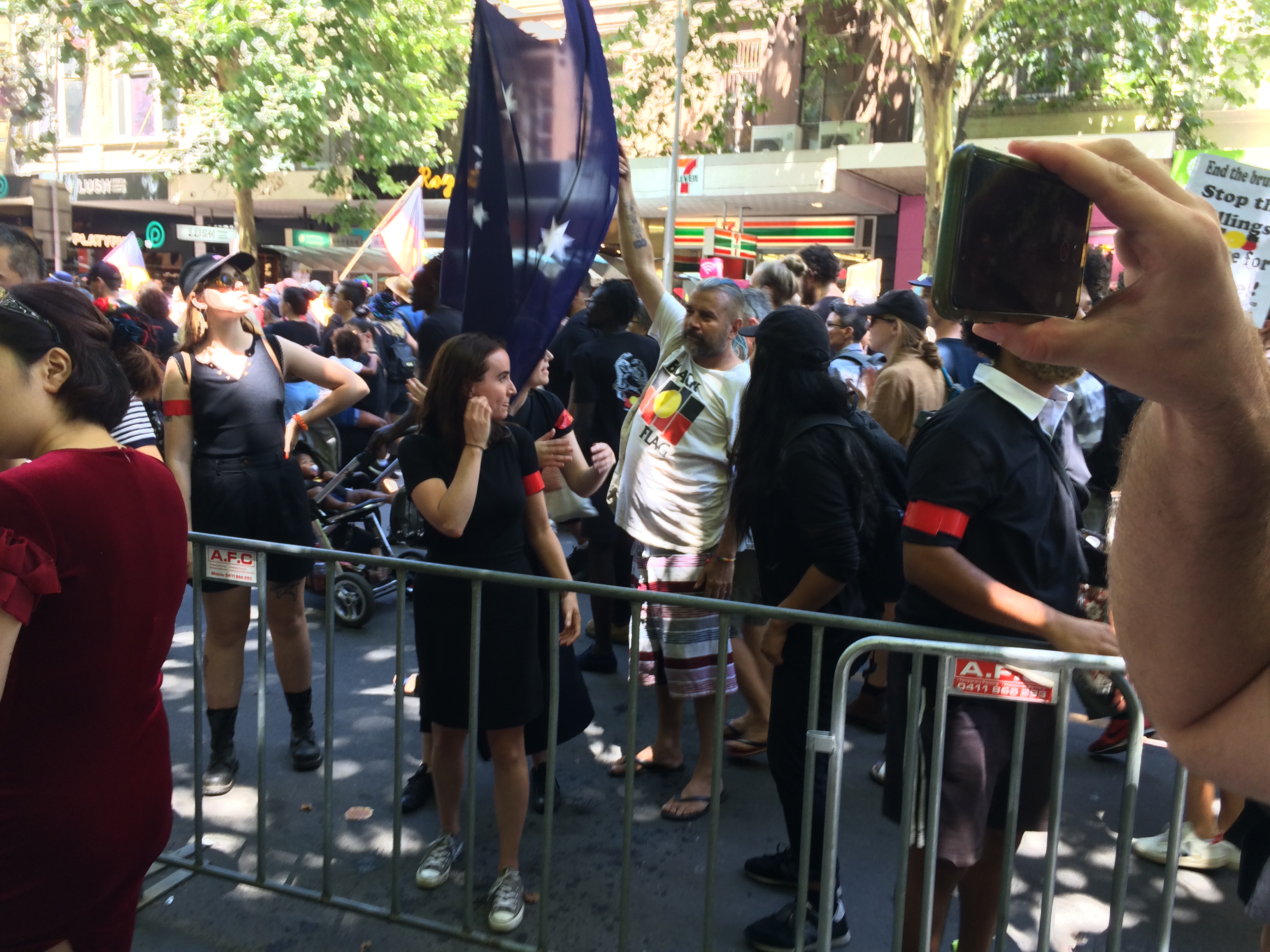 As such, they had the appearance of the national socialist SS. This also appears to mimic the garb worn by transexual entertainer Lady Gaga at a rally for criminal Democrat US Presidential candidate Hillary Clinton in 2016:

The XYZ does not know whether the similarity was intentional or merely subliminal.

This confrontation near the corner of Bourke and Flinders Streets appears to be mild however, compared to those which occurred near Flinders Street Station and at Federation Square. Although the media reports that there were clashes between so-called “far-right” protesters and the anti-Australian protesters, it is believed that the anti-Australian activists actually assaulted several Australian patriots simply because they were holding Australian flags.

In this livestream we conducted yesterday shortly after the rally, Australian Meditations gives an alternative account of the incidents at the head of the march to that given by the mainstream media. He also gives an account of an incident at a pub after the event where an anti-Australian protester attempted to burn an Australian flag he was carrying.

The march appeared to be led by a hard core of part-aboriginal and Marxist activists: 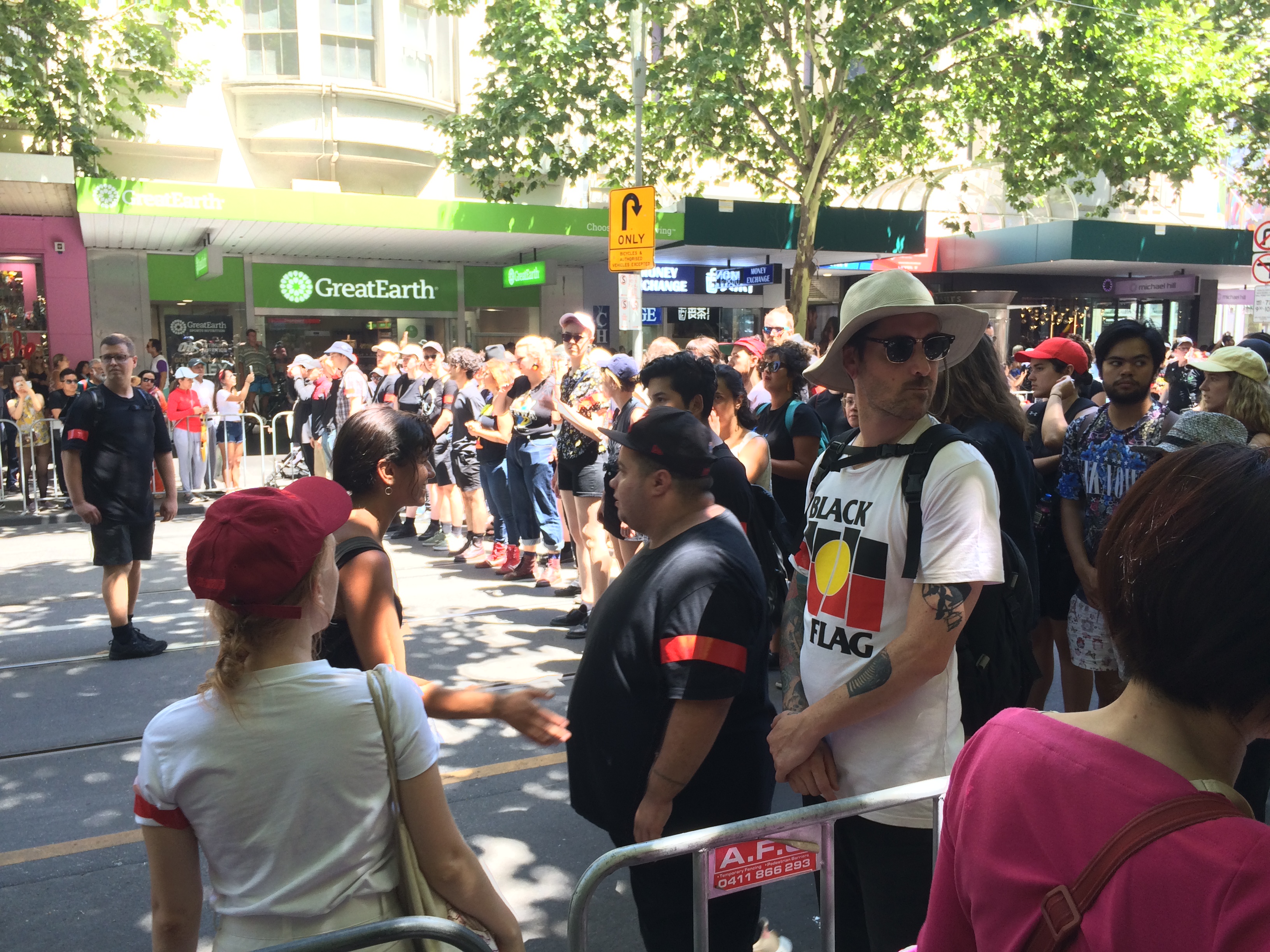 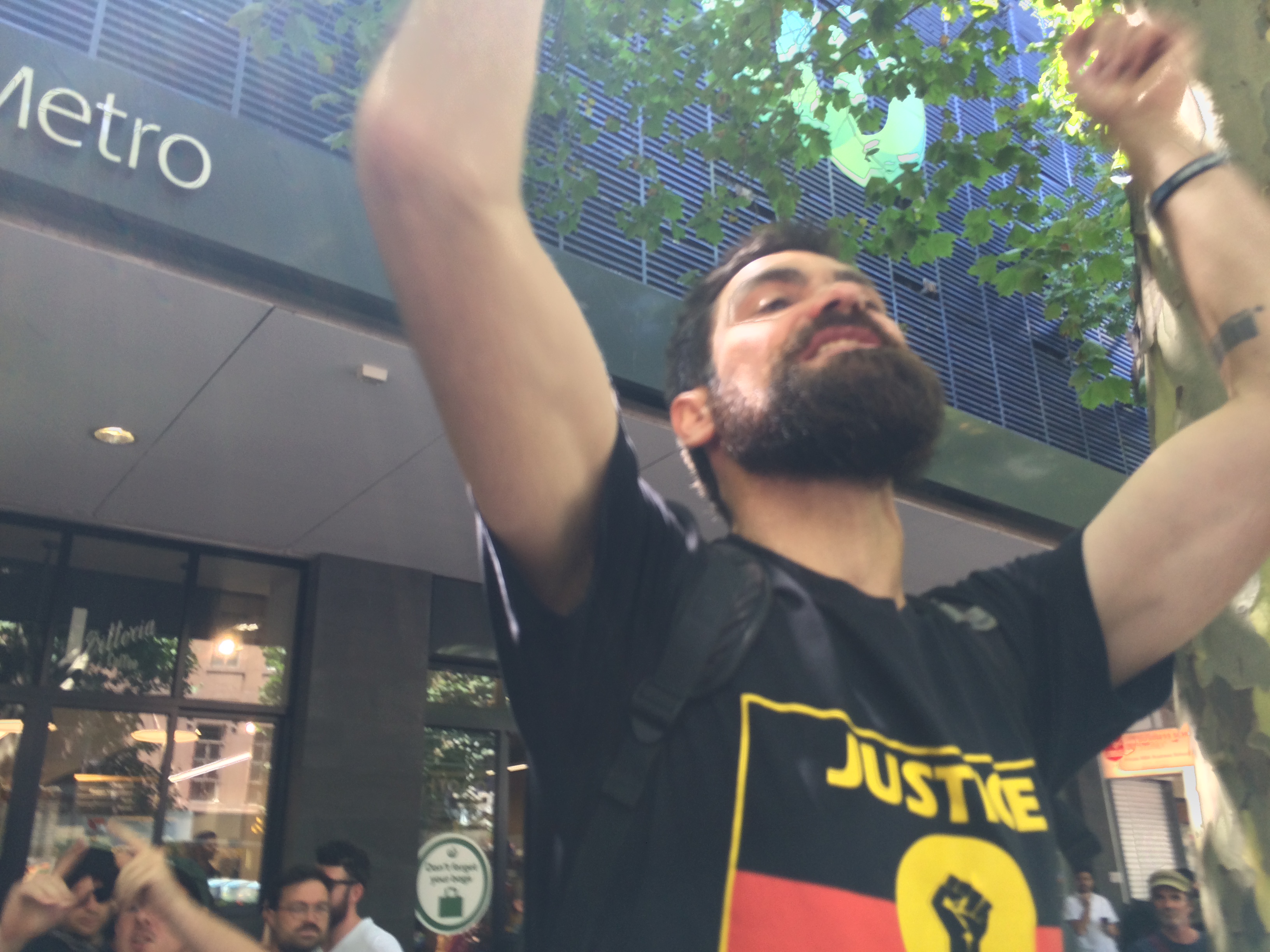 Victorian socialists were in attendance: 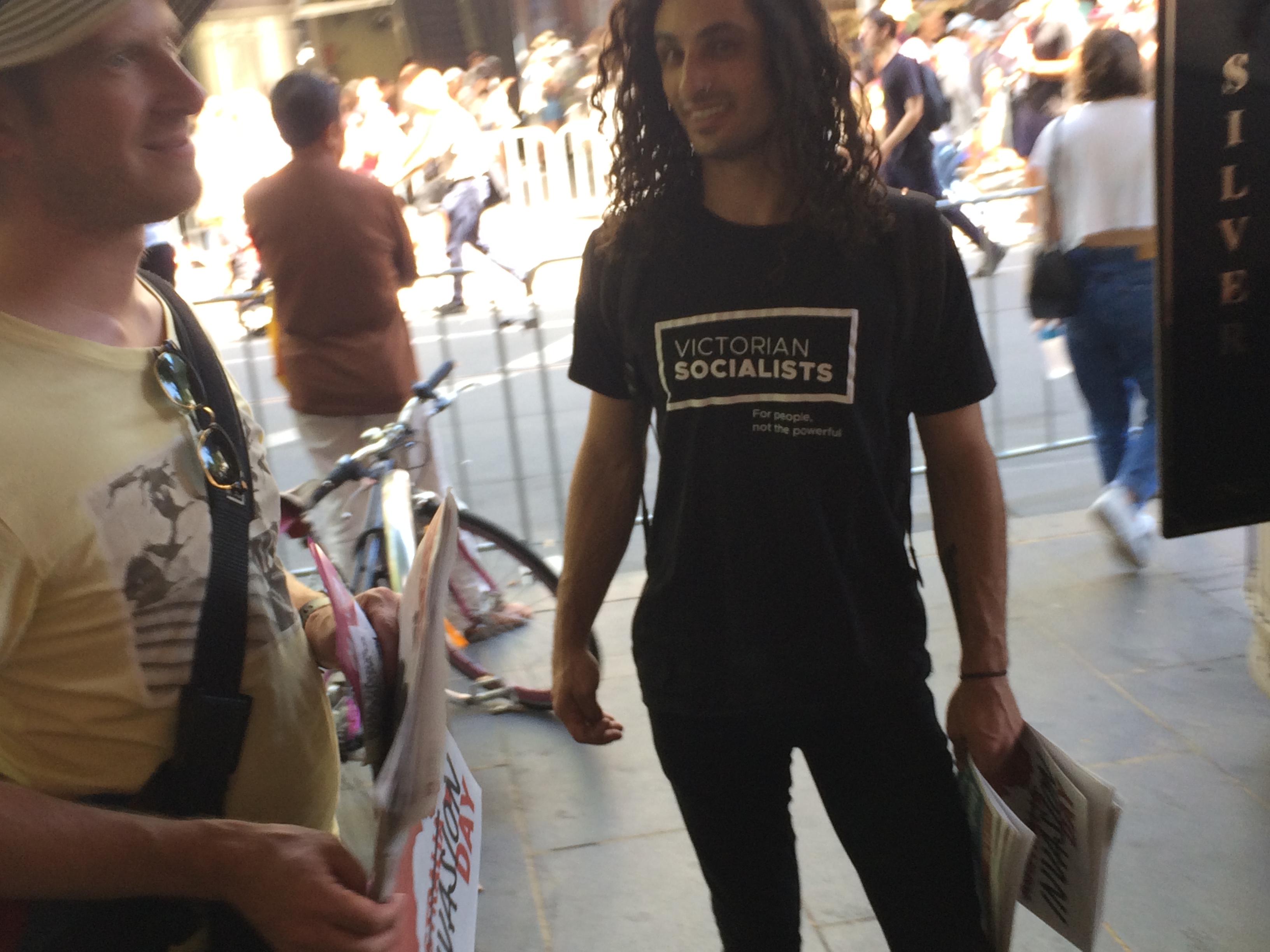 As were communist group International Workers of the World: 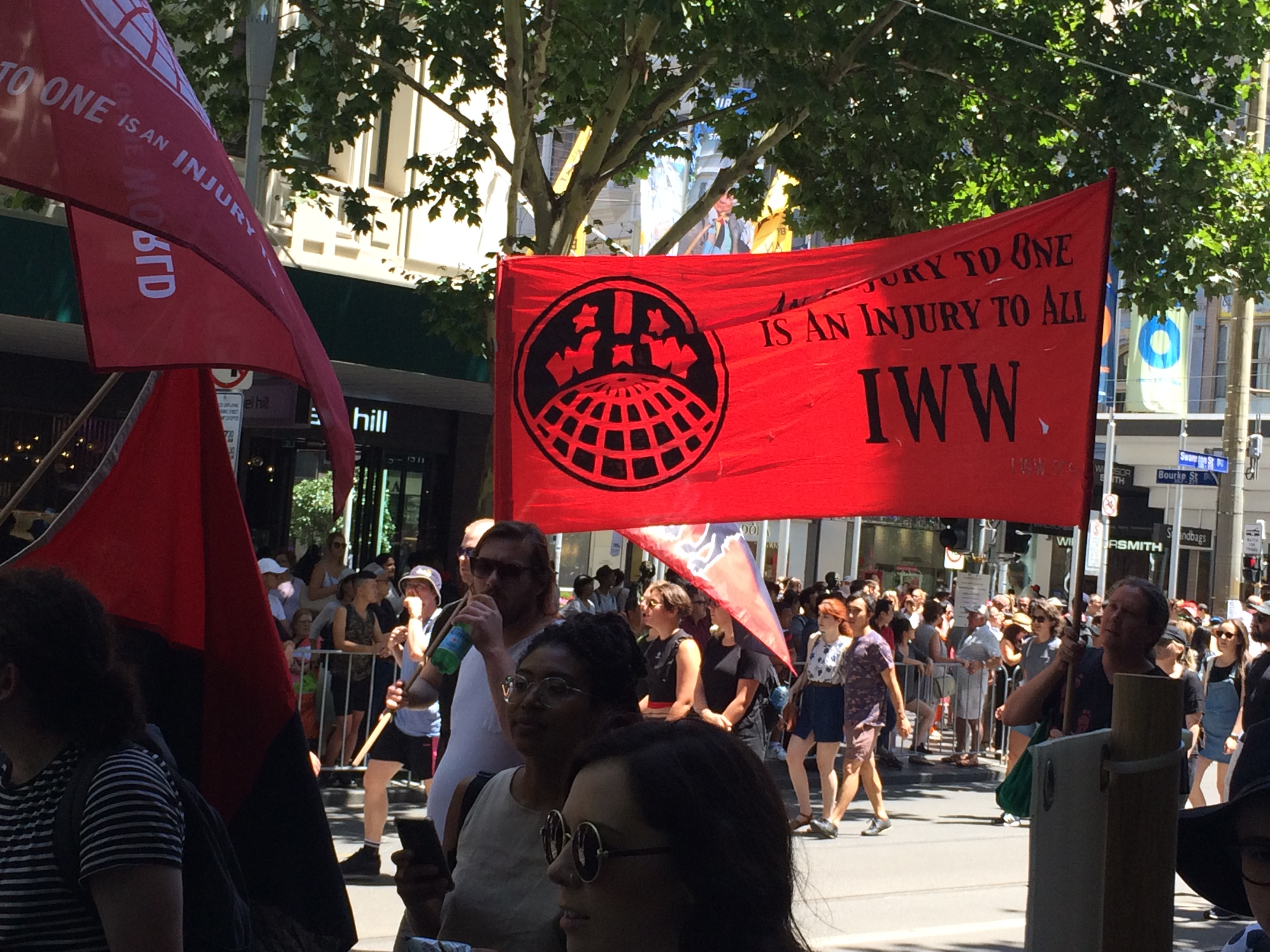 And one woman held what appeared to be an Antifa flag: 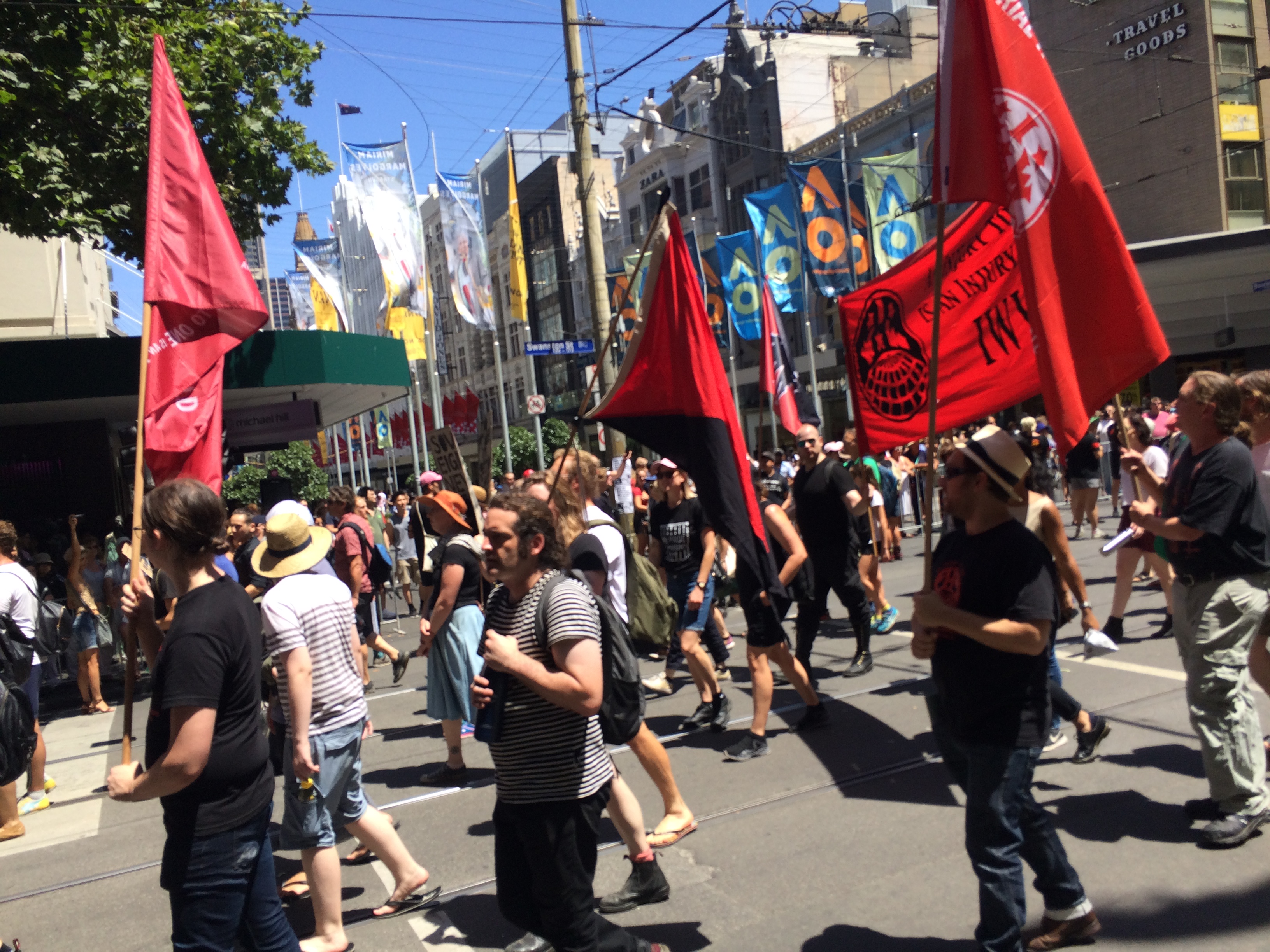 Aside from the hard core of Marxist and/or part-aboriginal activists, the demographic make-up of the march appeared mostly to consist of university-age white people: 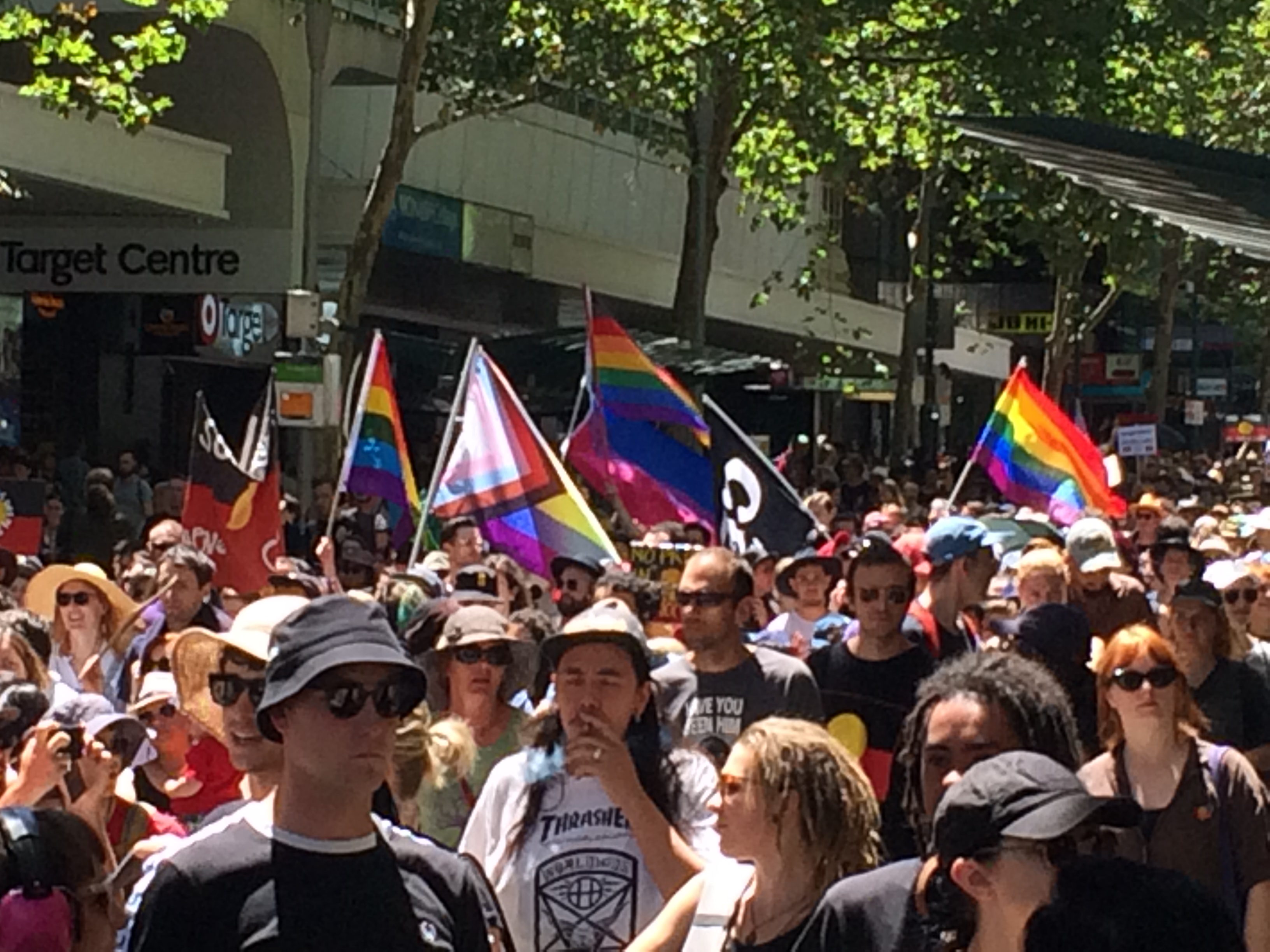 This is interesting as about half of the real Australia Day March consisted of various ethnic groups eager to display their civic nationalism.

It appears thus that the Cultural Marxist plan for the fundamental transformation of Australia is well underway, at least in Melbourne.

Put simply, white people have been co-opted to fanatically support their own genocide.

This is an unhealthy state of affairs which, if left unchallenged, will lead to the complete dismantling of Australia as it currently exists.