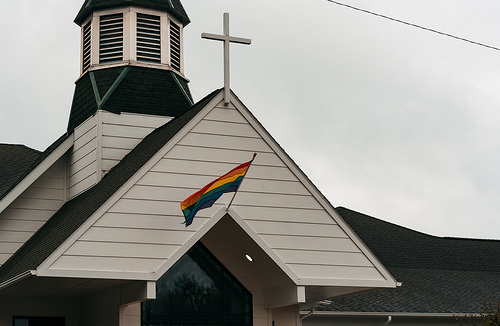 Over at Sigmaframe there is an article up concerning how The Church should best deal with homosexuals who identify as Christians. The article, Can Christians be Gay, is best exemplified by its conclusions. Bold emphasis is mine.

“Homosexuality is one of the main challenges faced by most churches these days. In response to this crisis, many pastors are following the cultural trend by pressing all the members of their congregation to accept and interact with gays. There are two problems with this approach.

In other words, those pesky Christians who hold to the word of God are most tiresome indeed for all those gays who just want to be loved by everybody. Not only that but gays’ spiritual vitality will be weakened by having to even interact with those pesky straights. Just what is to be done?

“There are two things that the Church can do to improve their work for Christ, concerning homosexuals.

Following the last point, repentant gay Christians would be best qualified to administer an appropriate hermeneutical interpretation of scripture to other gays under their mentorship. Even so, any “reinterpretation” of scripture should not be comprehensively different from the Gospel of Christ.”

Apparently nobody gets the gays except for those experienced with being gay. It’s such a unique and special sin that all the rest of humanity is simply unequipped to deal with such a delicate matter.

This nonsense is subtle propaganda pushed by the homo bloc. They’re not really sinners like those other sinners; they’re special people deserving of special treatment.

Well, they’re not and this is complete rubbish. To best answer the oh so pressing and difficult problem of the homos amongst us, I shall simply re-post the above screed but I shall substitute the sin of being a homosexual fornicator with some other sin. Let’s see how it reads, shall we.

“There are two things that the Church can do to improve their work for Christ, concerning rapists.

Following the last point, repentant rapist Christians would be best qualified to administer an appropriate hermeneutical interpretation of scripture to other rapists under their mentorship. Even so, any “reinterpretation” of scripture should not be comprehensively different from the Gospel of Christ.”

Feel free to substitute other well known sins. Murderers would be a good one, as well as thieves, adulterers, blasphemers, and you get the picture.

The complete ludicrousness of worrying about “PR” in such a situation becomes readily apparent after the substitution. As bad as this is it doesn’t even come close to what is being pushed in the name of the Christian homos in other parts of the world.

“Allberry and Butterfield argue that gays deserve access to our children because intimacy with our children is the reward Jesus promised them for following Him, to make up for the intimacy they are giving up by leaving the gay lifestyle. Back in 2015 Chandler laid the foundation for this as well. He says that gay Christians are special because by giving up the gay lifestyle they have given up more than the rest of us.”

Homosexuals are not special; they are fallen. If they repent, accept salvation, and cast off their sins then they shall be welcomed back into His house. But they do not get welcomed back under their own special conditions. And they most certainly do not deserve any special treatment due to their prior sinful nature.

To understand how perverse this attitude is, just contemplate that all an individual has to do to suddenly receive special treatment above other Christians in the eyes of God is to declare himself a sodomite. By such an act he is suddenly special. Nobody else in The Church can possibly relate to him unless they themselves were also a member of the special sodomite club in the past. Perhaps they should also get to sit in the special pews up the front with all of the other ex-sodomites, or not so ex-sodomites but heh, we can’t be judgemental because we’re Christians and we need to suck this up, right?

Sooner or later a stand has to be made. This one is as bad as any.