I don’t like to oversell things, but this video is funnier than The XYZ Hamster. It is even more epic than the How Bout Dat Girl.

Bearing, with a little help from the missus, takes the mick out of this black girl who genuinely believes that she is white.

I have two favourite moments in this video. The first is when Treasure, 16, black, is asked, why she believes she is white:

Dr Phil: “When you say that you believe yourself to be Caucasian, tell me why you believe that to be true.”

Treasure: “Well I know I’m a Caucasian because, when I wake up in the morning I just have such a great life, and that my hair is so perfect, my skin isn’t ugly, and I’m not fat.”

My other favourite moment is possibly the most truthful, and tragic moment of the video:

Treasure: “I know that I am white. There’s no doubt in my mind.”

Mother – Monique, who admits lying to her children about their race: “Even though I have told you that your father is not your father, and you are actually African-American.”

I actually love that Treasure believes she is white. I love that this has happened. This girl is a pioneer. If “gender” is fluid but sexuality is set from birth, it is only a matter of time before race is just another one of the many exciting identities with which weirdos and perverts can experiment.

Actually, I have another favourite moment of the video. It is how the entire way through, Dr. Phil, the girl’s mother and the entire audience are looking at her as though she is completely out of her mind, yet this guy is able to get woman of the year, and nobody in that audience would bat an eyelid:

The fact that this guy… 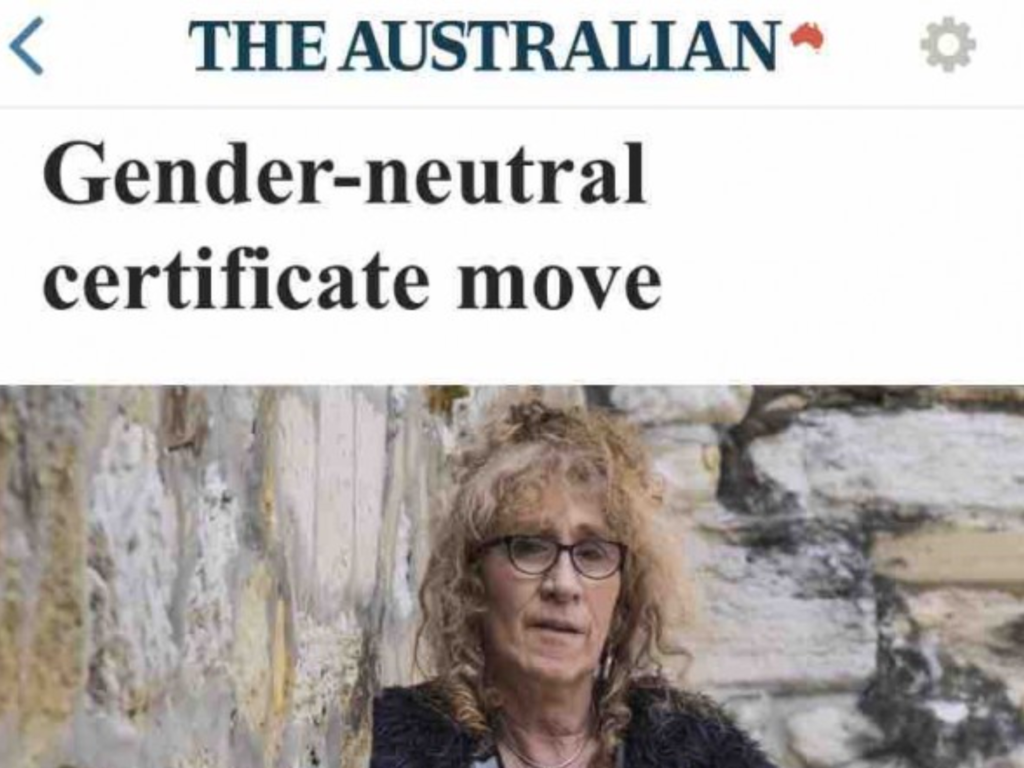 …was born with a penis and XY chromosomes, yet enough people in the Tasmanian parliament buy into the lunacy that “gender” is a social construct that they are considering taking “gender” (it’s “sex”, bozos) off birth certificates.

It is why I could do nothing but mock the following line a few days ago:

“At the moment in Tasmania, if Jasper wants to have his birth certificate changed he will need to have a hysterectomy, and that is cruel and unnecessary.”

It is a bald-faced denial of biological reality; an example of lying to oneself.

It is curious then, that people are still allowed to acknowledge biological reality when a black girl insists she is white, but when a man insists he is a woman everybody is expected to feign understanding and overturn basic science. A clue as to why this is so may come from comparing Rachel Dolezal to this young girl. Back in 2015 Dolezal was exposed as a white woman pretending to be black, who had even managed to head the black rights organisation NAACP. When she doubled down and maintained that she was black she was rightly lampooned. By the NPC-MSM no less.

Yet one could make the case, aside from pointing to average IQ differences, that it was far smarter for white Dolezal to identify as black than for black Treasure to identify as white. Black people may be tempted by all this nonsense about so-called “white privilege” to identify as white in order to gain access to “white privilege”, but they would merely be falling victim to Cultural Marxist propaganda. The term “white privilege” exists only to victimise white people, to frame their every success as a result of oppression or exploitation of others, and to justify their marginalisation as a means of wealth redistribution.

To the contrary, white people who have identified as black gain access to the real privilege which our current system currently bestows. It is an open secret so dangerous that here in Australia a KGB-style arm of the government has been established, with an appropriately long Orwellian title, to prosecute anybody who points this out.

This open secret is dangerous because their is one identity we can claim which would allow us access to both the ultimate victim card and real privilege all in one, with the added bonus of the ability to frame the way we see reality. They are the ones who have decided we can identify as any “gender” we like, yet race is strictly off limits. One would imagine those blessed with this identity would be keen to guard access to their club very closely.