Cleo Batchelor of the Year and Muslim Man of the Year 2005, Sheik Taj al-Din al-Hilali has been re-appointed Grand Mufti of Australia by Qld. Imam, Abdul Taub Raza at the Logan Mosque in Logan, Queensland Sept 28, 2018.

The controversial Sheik was previously appointed the Mufti of Australia by the Australian Federation of Islamic Councils in 1988. He adopted the handle of ‘Grand Mufti of Australia and New Zealand’ – a title not endorsed unanimously – but used extensively by the Dar al-Harb MSM in the years of his Grand Mufti-ness 1988-2007.

It should be remembered that Sheik al-Hilali was the Grand Mufti at the time of the infamous Lebanese gang rapes in Sydney 2000.

Sheik al-Hilali was the Grand Mufti at the time of the equally infamous convictions of the gang rapists in 2002.

Australia was deafened by the resounding silence from the Grand Mufti in the face of the convictions for crimes that Justice Michael Finnane described in the transcripts of the trial of these gang rapes as “events that you hear or read about only in the context of wartime atrocities.”

Australia was again let down by the Grand Mufti in 2005 when on September 16, the NSW Court of Criminal Appeal reduced the sentence of the gang leader Bilal Skaf’s sentence of 55 years to a maximum of 28 years, with a parole period after 22 years.

During the course of these trials and appeals, as well as the escalating tensions with the Muslims in Sydney, The Grouse eventually erupted at Cronulla December 11 2005 when two surf lifesavers were bashed by the ‘youths of Middle Eastern appearance’.

Again, in the new year (2006) another deafening roar of silence from the Grand Mufti when NSW Attorney General Bob Debus appealed the reduction of Skaf’s sentence to the High Court of Australia. On Feb 3 2006, the High Court refused leave to appeal arguing that an earlier reduction of Skaf’s original 55 year sentence to 46 years (after successful appeal) contained so many errors on the part of the trial judge that the High Court had no choice but to refuse the appeal. The NSW Attorney General appealed again and a 31 year sentence was imposed in July 2006.

As we heard nothing from the Grand Mufti of Australia and New Zealand in the course of these events, it was a forgone conclusion that when Sheik al-Hilali did finally bring forth an utterance, in October of 2006, his statement would be immediately placed in the context of the bashings which triggered the Cronulla Riots, as well as the ongoing legal battles to get the maximum sentences of the Lebanese gang rapists reduced. Again, as serious as is the crime of rape and especially gang rape, in these cases of the Lebanese Muslim gang rapes, we are talking about crimes that Justice Michael Finnane described as “events that you hear or read about only in the context of wartime atrocities.”

These were heinous crimes that rightly infuriated Australia.

So when the Grand Mufti opined that “If you take uncovered meat and place it outside on the street, or in the garden or park, or in the backyard without cover and the cats come and eat it … whose fault is it, the cats or the uncovered meat?” – how is this going to play to Dar al-Harb? He obviously did not put on his ‘moderate Muslim’ thinking cap and work that one out. And for those Kaffirs who might be thinking, ‘Now we really should get onto the local Council about those cats’, the Sheik had to grind it in: “If she was in her room, in her home, in her hijab – no problem would have occurred.” 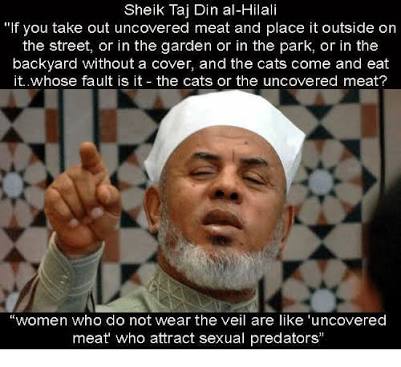 With the cries of ‘Get the Aussie sluts’ still ringing in our ears from the Lebanese gangs of ‘Youths of Middle Eastern appearance’ when they rumbled with The Grouse at Cronulla, the average Australian Kaffir was good and mad over the Lebanese Muslim gang rapes. The feathers were on Australia’s back lawn for all to see. With the ‘uncovered meat’ comment and its clarification reported in all the press, the collective wrath could not land on anyone other than Sheik Taj al-Din al-Hilali, Grand Mufti of Australia and New Zealand. Even the Sheik’s Handlers would have known he was in deep doo-doos over his ‘uncovered meat’ comment. In June 2007, he stood down or was stood down from within the Council of Imams. He would need a long time in the political wilderness before he could be re-branded and rehabilitated for Australian non-halal consumption.

And now, he is back and rehabilitated as a poster ‘moderate Muslim’. Let us hope our XYZ will keep us up to tempo with how that goes.

The author, Lady Sheila Yowess is a Dame Companion of the Excellent Order of Strewth, Grouse and the Strayan Way, abbreviated according to the chivalric protocols thus: DCSG. Sir Bruce, the Yowie and Knight Cmdr of the Order is indisposed at present to write for the internet and has delegated this task to the Dame Companions.