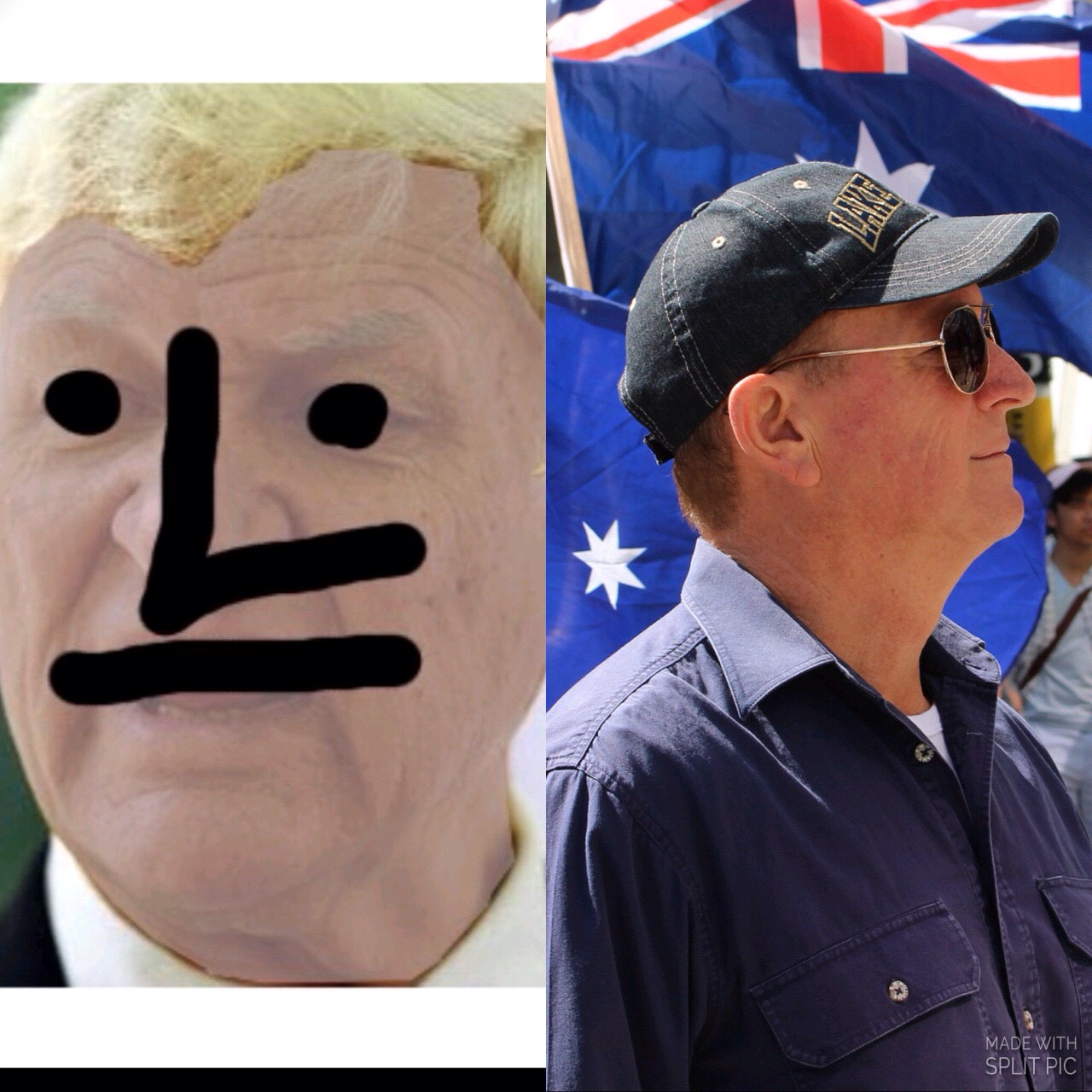 There are 3 key points which will help us understand the axing of Senator Fraser Anning from the Katter’s Australian Party. The first point is revealed in Anning’s statement on his axing, which you can read in full below: 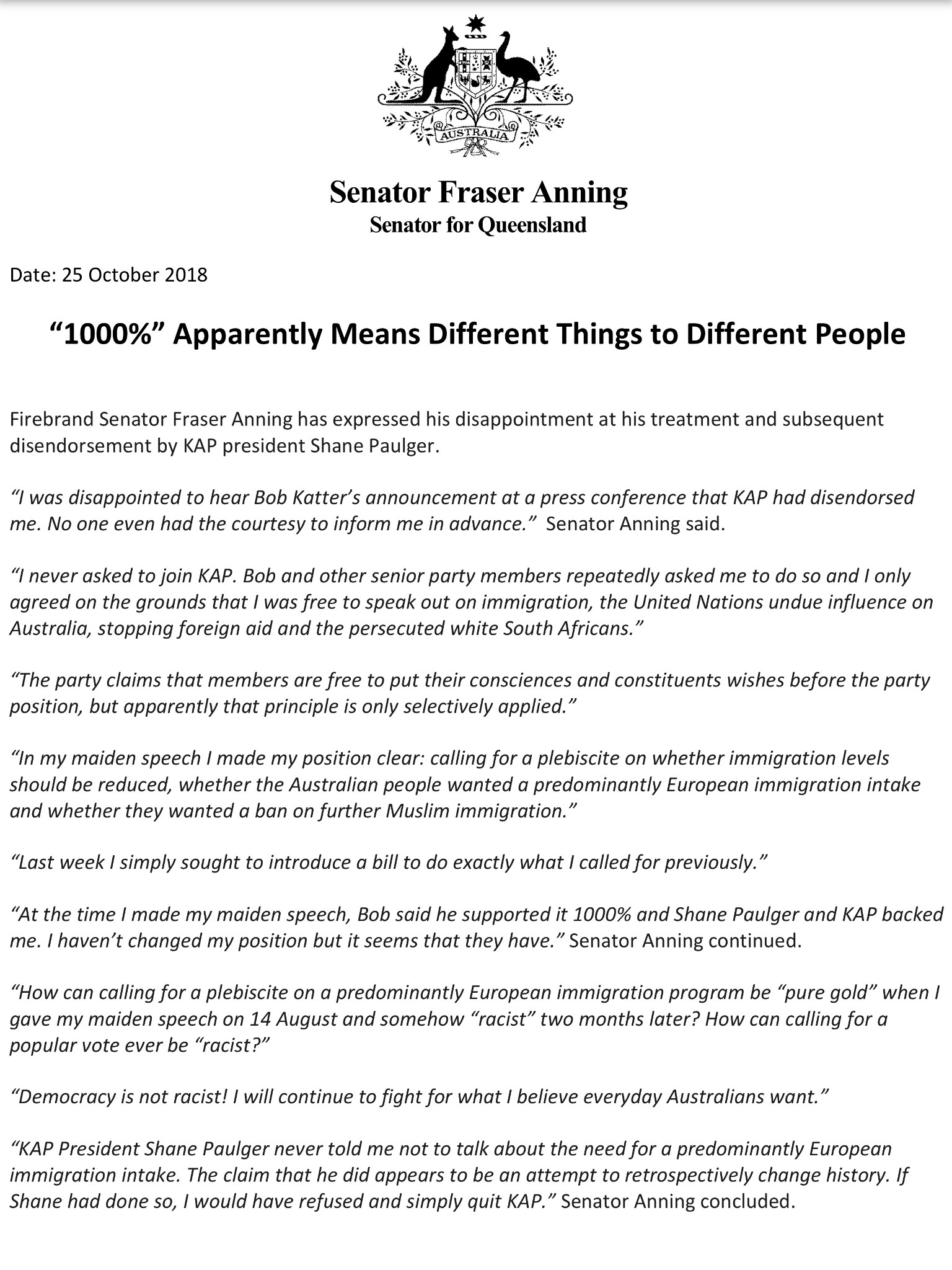 The following passage is important:

“I never asked to join KAP. Bob and other senior party members repeatedly asked me to do so and I only agreed on the grounds that I was free to speak out on immigration, the United Nations undue influence on Australia, stopping foreign aid and the persecuted white South Africans.”

“The party claims that members are free to put their consciences and constituents wishes before the party position, but apparently that principle is only selectively applied.”

“In my maiden speech I made my position clear: calling for a plebiscite on whether immigration levels should be reduced, whether the Australian people wanted a predominantly European immigration intake and whether they wanted a ban on further Muslim immigration.”

“Last week I simply sought to introduce a bill to do exactly what I called for previously.”

“At the time I made my maiden speech, Bob said he supported it 1000% and Shane Paulger and KAP backed me. I haven’t changed my position but it seems that they have.”

So according to Anning, he understood that he would be able to discuss immigration levels, the banning of Muslim immigrants and the favouring of European immigrants when he first joined the party. The fact that this understanding has changed makes us ask the question – who got to Bob Katter?

This leads into the second key point.

From the Gold Coast Bulletin:

KENNEDY MP Bob Katter has denied suggestions his party dumped Senator Fraser Anning in a bid to secure Labor preferences at the next election.

Mr Katter’s previous endorsement of Senator Anning’s maiden speech, in which he called for a “final solution” of the migration issue in Australia, prompted calls within the Labor Party to direct preferences away from the MP at the next election.

“I’ve been winning elections for 45 straight years. Bring it on Buster Brown,” he said.

Who got to him? Labor got to him. It had indeed been foreshadowed.

One Labor source said Mr Katter’s position on immigration would probably have to change for the party to preference him again. This is despite a general inclination towards keeping the seat out of LNP hands. Another person disagreed that the recent comments meant preferences should be switched, indicating the status quo should be maintained.

If the assertion by Fraser Anning that what was assured to him one day was denied to him the next is true, and if the rumours regarding Katter’s motivation for dumping Anning hold substance, then the NPC meme of Bob Katter made by Matty’s Modern Life brilliantly sums up this situation:

A Non-Player Character in a board game or video game does not think for themselves or have any inner motivation, and can only respond to events based on their simple programming. Bob Katter appears to have been programmed to hold his seat and hold the seats of his Party at all costs, at the expense of his commitment to upholding this dying outpost of Western civilisation.

This leads to the third and final point:

Australia’s conservative parties need to decide what they stand for.

On the right there is constant pressure for us to distance ourselves from the people telling the truth. These people telling the truth are always framed as the outliers, as the “far-right”, as the ones who will scare away the average punter. There is constant pressure to move to the mythical centre of politics in order to maximise political appeal and garner mass support.

But there is no centre.

There is only defeat after humiliating defeat, as the activists and parties of the left drag the acceptable bounds of public discourse well past what was briefly allowed in the ealry days of the Russian Revolution, before even those old school communists realised that undermining the basic tenets of civilisation were not a good idea if they wanted a country to rule over.

The fact is, real Australians never wanted mass immigration from outside of our European neighbours, and even that was a stretch in the 1950’s. Nothing had changed in the 1970’s when the doors were opened to the world. Nothing had changed in the 1990’s when Pauline Hanson warned we were in danger of being swamped by Asians, and was subsequently put in prison while the Liberal Party pretended to adopt her policy platform.

The reason chaos still reigns over the minor parties of the right is the same reason the Liberal Party is dying. Anybody who points out the truth that real Australians want an Australia that reflects our European heritage is labelled a “nazi”. The answer is to grow some balls, embrace Australian ethnic nationalism – the reason people are voting for you in the first place – take real action to achieve it, and tell the flakes who cry “nazi”, “racist” and “white supremacist” to get stuffed.