What do the following stories have in common?

Maybe there’s no common thread. I might be clutching at straws here, but it does seem as though there’s something going on…some sort of collision, perhaps, between what’s supposed to happen and the way an ideology plays out in reality…something about lessons not learnt while the wrong lessons are still being painfully extracted from recalcitrant facts…

Come on, humour me.

“A young mother who died after being set alight in a still unexplained tragedy is believed to have entered Australia illegally as a child bride.

Police initially believed Hazara woman Sadif Karimi was 22 when she died in The Alfred hospital in February after being severely burnt in a backyard in Melbourne’s south-east. Her family said she was just 17.

Ziba’s husband and his family have told police that she set herself alight but police also continue to probe whether someone else doused her in petrol and set her on fire.

She was only 14 years old when she married a man she had never met in an arranged Islamic ceremony in Afghanistan in 2014. He was more than a decade older.

Her aunt, Parwana Khaliqi, said Ziba then illegally entered Australia with her new husband on a passport that had been made with fraudulent documentation.”

Now, what was supposed to happen was that we let in all the good people who wanted to get away from the bad people who had taken over in Afghanistan. The thinking was that no bad people would think to exploit our kindness, because if they were bad they’d be in good company where they were.

It was a good theory that had some bad results.

You see, to some of those refugees the superiority of feminism over sharia law was less than obvious. They looked around at the sexual anarchy of Western society and thought, “hang on, maybe we don’t want our women getting buggered in alleyways behind nightclubs…”

Which brings us to:

“Saxon Mullins was what used to be called a “late bloomer”. A bright but mostly unsophisticated teenager from the New South Wales Central Coast, she didn’t have her first kiss until she was 17.

“I had this grandiose, romantic [idea]: ‘It’ll be by candlelight on a bed of roses’, with someone who loves me,” Saxon remembers.

“No-one dreams of their first time being in an alleyway with someone whose name they can’t even remember. No-one wants that.”

Funny, when I first saw a picture of this body-shirted wogboy and heard that he’d got in trouble for sodomising someone named “Saxon” outside a club in Kings Cross I thought…I mean, talk about reputation damage!

She has always called this encounter rape. The young man involved, Luke Lazarus, has always insisted it was a terrible misunderstanding which he bitterly regrets.

One way or the other, it’s been deeply traumatic for Saxon and ruinous for Lazarus.

A widely publicised, five-year criminal legal battle ended with no finality for anyone. A jury and a series of judges have found that Saxon did not consent to sex, but the legal sticking point has always been whether Lazarus knew she was not consenting.”

You see, one of the costs of female sexual liberation is that taxpayers have to pay millions of dollars to fund five years’ worth of legal battles over what precise mental state a drunk girl was in while she was in a situation she should not have put herself in, and whether or not the boy she was in it with, also drunk, knew she was in it (the mental state, I mean).

This case went through two trials, first convicting, then acquitting the overenthusiastic yiros merchant, while it’s clear that the vicissitudes of the case have taken their toll on the once easygoing, now now crazy-eyed young slapper whose case has become the cause celebre of femistasis across the land.

Now here’s another challenge for the ages: school dress codes. Once merely a topic for school dunces uninterested in broader social issues to write mind-numbing essays about, the minutiae of school dress codes are now prime time news

“Girls attending public primary and secondary schools in NSW will be given the option of wearing shorts or trousers under new policy changes.

Premier Gladys Berejiklian and Education Minister Rob Stokes are set to announce changes to the schools uniform policy today, forcing all government schools to let girls wear pants if they want to.

Currently, it is up to the discretion of each individual school as to whether it is allowed or not.

I wonder how many focus groups and steering committees tendered submissions before this bold new policy direction became, sort of, policy?

Moreover, I wonder how this is news at all given that in any given school around the country there are now boys who think they are girls and vice-versa, changing their names and pronouns and pounding hormones. 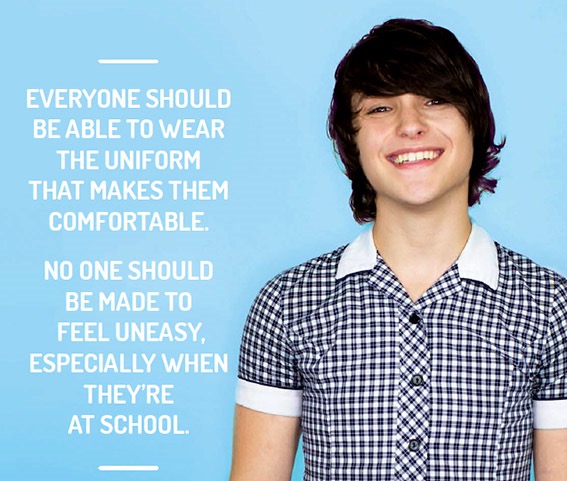 Meanwhile, in the US a putative female empowerment collective has turned out to be an S&M sex cult where Strong, Independent Women willingly got their arses branded with Big Daddy’s initials:

“According to the legal documents, members of Raniere’s inner circle held high positions within the cult and had power in its “Pyramid Organizations,” having served on the executive board of NXIVM. Because the group’s activities were illegal and meant to defraud, the documents say they formed an organized crime “enterprise.”

As previously reported, Allison Mack worked alongside Raniere and the four listed on the new indictment to recruit women as sex slaves for Raniere under the guise of a women’s self-help organization. Members were allegedly branded with the organization’s symbol and extorted with sensitive content including nude photos that they were asked to surrender to the organization as a kind of commitment.”

Then there’s this would-be Joan of Arc:

“Oksana Shachko, one of the founders of the Femen feminist protest movement, has been found dead in her Paris apartment, the group said on Monday.

Activists from Femen, known for its bold topless protests, said the 31-year-old Ukrainian had been found on Monday with a suicide note next to her body.

“It is with great regret and deep pain that I must confirm the death of Oksana,” said Inna Shevchenko, one of Femen’s leaders, who also lives in the French capital.

Another Femen founder, Anna Gutsol, wrote on Facebook: “RIP. The most fearless and vulnerable Oksana Shachko has left us”.

“We mourn together with her relatives and friends,” she said, adding that the group was awaiting “the official version from the police”.

Shachko was one of four feminist activists who founded Femen in Ukraine in 2008.

This crop of tragicomic, dystopian, dumb and dumber stories was reaped in the space of only the last couple of days.

Here’s a thought. Maybe the moral here is that feminism doesn’t work because it’s never been properly tried? Sensible, practical policy changes to the crisis in contemporary womanhood must be swift and far-reaching. Here’s a start:

Because there’s nothing WHATSOEVER that women can’t—or shouldn’t—do. I mean, once upon a time it might have seemed like a bad idea to put female wardens in men’s prisons, but look how that turned out…!