On Saturday, August 11, some of the most earnest leftists in Melbourne will be holding the Melbourne Anarchist Bookfair at Brunswick Town Hall, on the corner of Sydney Road and Dawson Street, Brunswick. They have somehow produced a hilarious flyer featuring a sluttily dressed, lace-up-boot-wearing woman of colour who is reading a pamphlet about the Essendon Football club.

She is seated next to a cat. 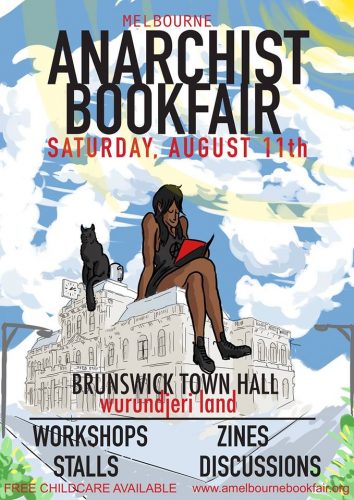 The bookfair has been advertised on the site of convicted fraudster and amateur librarian, Slackbastard, who has told us he plans to again man one of the stalls this year. The Reservoir resident was kind enough to grant us a short interview:

XYZ: What kind of numbers are you expecting to attend, and how many stalls are booked for the fair?

SB: Last year two people actually came in but they had mistaken us for a Middle Eastern Bakery. It is the same half dozen people each year who put up a stall each. Most of the books we try to flog are in Spanish or Russian. Do you speak Spanish or Russian?

XYZ: No. Can you tell me who put together that hilarious flyer though?

SB: It was one of the chicks, of course! Obviously it is funny because of the whole cat lady angle. But what most people don’t realise is that most of the chicks in this scene also reckon they have special powers. They identify as wiccans, hence the black cat, but really they are all just batshit insane.

XYZ: Will Mrs. Slackbastard be in in attendance?

SB: No, someone has to stay home and mind the cats.

XYZ: Can you tell us more about Slackbastard?

SB: Well, I just look after the tech side of things, actually. The man players are a small network of hacks who work for Fairfax and the Guardian and elderly, balding professor at Monash. We all met at La Trobe back in the 70’s. Some of us used to date. Got quite incestuous, really.

XYZ: Well, considering that everybody in the community you target pretty much knows who you guys all are, we have to say you are quite brave to keep operating as you do.

SB: Well, that just comes with the territory. As an advocate of free speech, I am actually more than happy for people to come down and have a friendly chat.

XYZ: Great. How will we spot you?

SB: I’m the guy with the muscle wastage.