Editor: Originally published December 2017. The so-called “Campaign Against Racism and Fascism are gearing up for the arrival of Stefan Molyneux and Lauren Southern in Australia.

Now is a good opportunity to remember that CARF is a Socialist Alternative front. 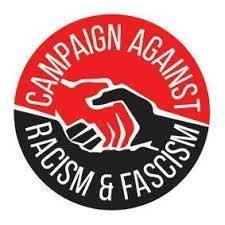 So the grandiosely titled “Campaign Against Racism and Fascism” [or CARF] was out on the streets again on Wednesday, this time “defending” a several hundred strong march organised by members of the local Islamic community to protest the U.S recognition of Jerusalem as the capital of Israel, against Melbourne identity Avi Yemini and what looked like about 30 odd pro-Israel counter protesters.

Why exactly several hundred perfectly capable people surrounded by almost as many police needed protecting from a lone bodybuilder and his couple of dozen mostly elderly followers wasn’t really explained. I’m sure they have their reasons.

CARF is also organising a riot protest at the Flemington flats on Saturday to demand that evil bigoted police stop arresting African youths for committing crimes. Greens MP Adam Bandt is speaking as well as a number of other local leftist luminaries; should be a blast.

But who are these people? Where do they come from?

If you’ve been paying attention to political protests in Victoria and the violence that often accompanies it you’ve probably heard of CARF at least once. The group has burned Australian flags, attacked police, incited riots and sees it as their duty to violently attack and block anyone in Melbourne they see as being “racist” or “fascist” up to and including screaming “Nazi” at a Jewish anti-crime activist wearing a Kippah.

They began as a group after the first Reclaim Australia rallies that were held during the Easter weekend of 2015. Of the 16 events held across the country the one held in Melbourne’s Federation square was the only event where the mobilised extreme-left outnumbered the Reclaimers. Unsurprisingly it was also the only rally that devolved into mass violence.

That counter protest had been organised by a group known as “No Room for Racism” which was dominated by the Socialist Party of Yarra Councillor Stephen Jolly and had a cute picture of an angry panda as its logo. The Socialist Party was the pet group of Counsellor Jolly and is based almost entirely around his council seat in the inner northern suburbs of Melbourne.

After the shock of seeing Australians having the sheer temerity to protest under the banner of the Australian flag, the wider extreme-left in Melbourne was roused to a hate-filled frenzy. As usually happens there was a contest between groups as to who would lead this new movement. As the Socialist Party began to fall apart due to allegations of widespread sexual abuse, a new group calling itself the “Campaign Against Racism and Fascism” came to the fore.

And a coterie of violent, thuggish, badly socialised Socialist sociopaths was born.

A clue as to what groups are behind the CARF can be found if you check the Facebook list of attendees for the CARF end of year party next Tuesday, to be held at the impeccably working class [hehe] Queensbury Pourhouse [cheapest meal served is a slice of toast for $7] in the fashionable inner city Melbourne suburb of Carlton.

Are you beginning to sense a trend?

Of the 52 people who have expressed an interest and the 20 who have been invited but are yet to respond, nearly all have some link or another to Socialist Alternative. One of the few exceptions is Debbie Brennan, the walking-corpse-with-red-hair-and-an-American-accent you may have seen or heard acting as the CARF media spokeswoman.

After the Milo protests Ms Brennan’s picture was widely distributed both here and overseas and she was cruelly gifted the rather unkind moniker of “Skeletor” due to the undead-like visage she presents.

Debbie is a special case. When she was a young[er] Communist back in the 1980s she went on a “Work Brigade” to Cuba to visit Castro’s Socialist paradise and found herself profoundly disappointed in the Stalinist Island regime. She felt let down, not because of the poverty or the police state, but because the Cuban Communists were simply not extreme enough for Debbie’s taste.

On her return she founded the Australian branch of the Freedom Socialist Party and began to preach her particular feminist inspired gospel that declares all heterosexual sex under Capitalism to be rape.

In short, while Socialist Alternative has often been accused even by other Marxist groups of being tantamount to a cult, Debbie makes them look like wishy-washy moderates.

I bet she’s fun at parties.

All attendees at this shindig and amongst organisers of CARF in general have certain views in common:

So to sum up, CARF is a front group for people from Socialist Alternative and a few other smaller extremist groups who want to incite a violent revolution to overthrow the state and implement a totalitarian regime. They believe wholeheartedly that the police must be delegitimised and undermined to allow this revolution to happen.

And Federal Greens MP Adam Bandt is speaking at their event on Saturday in Flemington, protesting against the evil police picking on people by enforcing the law. In a more sensible society that might actually be the sort of thing mainstream journalists would report on.

Watch how many do.