Australian cities are being jam packed full of brown people, and the “whites” who hold elite positions in our sprawling shitholes are working as fast as they can to give it away to invaders. Take the front page of yesterday’s Herald Sun. It features two pairs of stories which juxtaposed paint the picture of our national suicide. 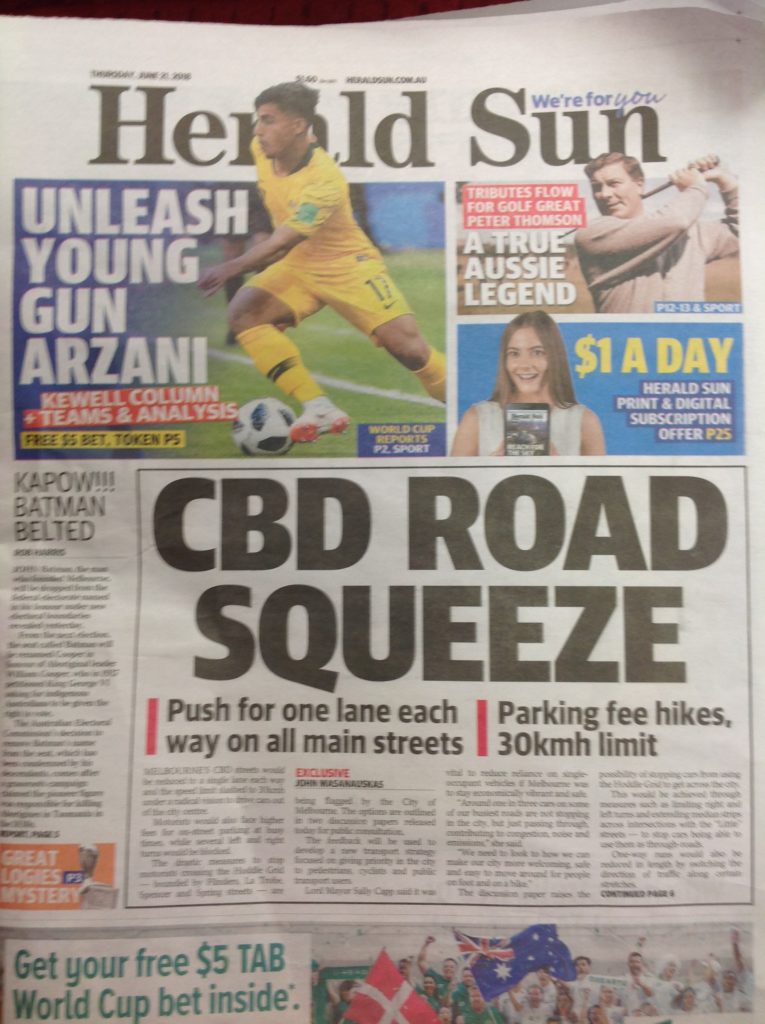 Let’s work clockwise from the top left. Our national soccer team is getting woggier. I don’t really care about that. Soccer is a stupid game. If they changed the rules to get rid of offside, let you use your hands, got rid of the goalkeeper, and punished divers with on-field gladiator-style executions involving lions and a mace, maybe I would watch it. Apparently our national side over in Russia getting beaten by Africans playing for nominally European countries. Experts seem convinced that replacing a lighter skinned wog with a darker skinned wog will help us beat said Africans. The kid can actually half play, but that is not the point. I just watch for the aerial shots of Russia and hope the globalists won’t push us into another brother war.

To the right, Australia has lost one of its sporting greats, Peter Thompson. He won the British Open 5 times and was runner up thrice. He also raised three kids and by all accounts was a superb gentleman. Apparently he cucked later in life and said that Karrie Webb was better than him, but I am not going to shoot him down for that. May he rest in peace.

The two stories, seen together at the top of the page, signify the great replacement: Out with the old guard, in with the so-called “new Australians”.

The feature article on the bottom right summarises plans being floated by Melbourne City Council to reduce the city speed limit to 30 km per hour, limit roads to one lane each and further hike parking fees. Driving through Melbourne’s CBD, one has always gotten the distinct impression that despite plaudits about the environment and safety for pedestrians, planners simply hate cars and their drivers. Now they are not even trying to hide the fact that they are deliberately trying to make driving unpleasant in their quest to completely cleanse the CBD of cars. Not that it will ever bother the fat slobs who work for the public service. While the rest of us rub armpits with the brain surgeons we import, they need their $120K a year because they get everywhere by Uber.

While bureaucrats attack what remains of Melbourne’s heart, the ideologues at the AEC attack its spirit. The bottom left article reports on the decision to rename the federal seat of Batman, named after Melbourne’s founder, in favour of an aboriginal, because some so-called “academics” can’t accept that it was right and good for our forefathers to conquer this land. The fact that it is the Australian Electoral Council doing this is a really big deal. Our institutions are thoroughly marched through, and in need of a good purge. Rest assured the statues’ days are numbered.

Our leaders want to give our country away.

We can fight for it or let it die.