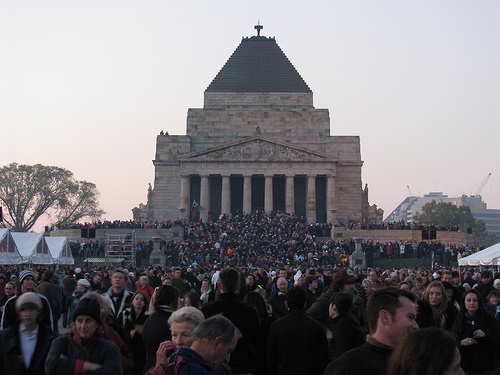 Anzac Day is once again upon us and given the heightened tension in Australia’s political climate, I’m sad to say that it will more than likely be the focus of a good deal of anti-Australian smearing from the usual culprits. I know that many Australians hold Anzac Day dear to them and it’s unlikely to be easily shaken from our collective identity, nor will it be surrendered from our grasp as a sacred day of commemoration and celebration. It is important to note however that Australia’s military prowess in the various conflicts that we’ve found ourselves in over the last century, are something to behold and shouldn’t be something confined to the one day. Yet we’ve allowed our national psyche to barely acknowledge Remembrance Day, Long Tan Day, and the anniversary of the Battle of Beersheba among others. It’s also critical to point out that the fact that we’ve allowed the campaign in Malaya and the Korean War to be almost entirely forgotten is a national shame which, more than likely, has a great deal to do with certain academics wishing to divert attention from a successful operation against Communism by Western Forces. The focus of that fight has been squarely laid on our involvement in Vietnam, which was of course more controversial and therefore easier to criticise/demonise.

In short, I do mourn the loss of public acknowledgement of our military prowess which I directly attribute to the general negative sentiments towards Western strength that permeate through our public institutions, and it seems we’re all too busy to care. I can’t easily shrug off my own sense of guilt over this, as I too have been caught up in the hyper pace of contemporary, digital age living in a capital city. Yet recent events and random conversations with strangers have prompted me to give pause and reflect upon my own service in the Australian Regular Army. I have to admit that at least part of why I don’t have a great deal to say about my own service is that I look to those who served in places like The Western Front, Northern Africa, Papua New Guinea, and Vietnam with such adoration that it inevitably tends to dwarf my own experiences.

This is not to say that I’m not immensely proud of my contribution to our national interests, its just that other things tend to occupy my mind more than my army life these days. You’re far more likely to run into me at Stolberg than you are at the local RSL. I’m more likely to be concerned over Melbourne FC’s chances of getting into the finals, or how I’ll get my hands on next week’s episode of ‘Game of Thrones’ than reviewing my possible entitlements from the Department of Veterans’ Affairs. My lifestyle and experiences are not uncommon for the soldiers of generation Y and the more I think about it, the more I see the manner in which our soldiers tend to be a snapshot of our society. Should you ever observe a Vietnam veteran alongside an Iraq veteran it becomes apparent that there are very few things that so poignantly illustrate the changing face of our ‘sons of ANZAC’ and our society as a whole.

My name is Barry and I served as an infantry soldier and French linguist in the Second battalion of the Royal Australian Regiment. I served in East Timor in 2007/08 and again in 2009. I’ve worked with our American partners on exercises along with the Papua New Guinean army and the French army. I’m of migrant background and was raised in the northern suburbs of Melbourne where I did much of my schooling. I never bring up the conversation of military service but such conversations have a tendency of intruding into my social life. I do casual security work when I’m not at University and one of my colleagues is an American veteran who served two tours in Iraq. Recently I found myself without much of a response to his query as to why Australian soldiers aren’t particularly vocal about their experiences and to why the Australian public aren’t more inquisitive or vocally appreciative towards the service of their soldiers. Personally, I find that the majority of Australians are tremendously respectful of their service men and women, and are always very polite and gracious towards those who have served and those who currently serve. In the interests of community engagement and support for my peers, I’ll humbly share a small piece of my experience in the Australian Army.

While serving in East Timor in 2007 the battle group in which I was serving in was put on high alert and prompted to quickly react following the attempted assassination of President Jose Ramos Horta and Prime Minister Xanana Gusmau. The 3rd battalion of the Royal Australian Regiment – who had a standby Company ready – were reacted and deployed along with elements of the TAG branches of the Special Forces. We were moved around the countryside by helicopter and I saw parts of the country that were even less developed than what I had become accustomed to. During a week of heightened activity, we had an ambush set up at a road intersection in order to stifle the movement of armed men who had been spotted in our vicinity by our reconnaissance elements. For all of this excitement, one of the things that stands out in my mind from this trip is the manner in which the guys from 3RAR generously insisted that their cooks save us some bacon in anticipation of our return from a patrol. The patrol wasn’t even that hard or eventful but hey, spare bacon. I personally never bought into the stereotype of them being an arrogant parachute battalion, and that experience only served to confirm my respect for them.

I could go on about the more tactical aspects of service life, but I think it’s of more value to recollect an occasion where our platoon was on patrol during my second deployment and we stopped at a remote village in the hills somewhere in the West, fairly close to the Indonesian border. There was a small vendor selling some kind of dumpling, pastry things – they may have been satay type things for all I can remember – and as can be expected the town dogs were eager to get a piece and hung around anxiously. One of the dogs managed to snatch one of these tasty snacks out of a small boy’s hands and enthusiastically devoured it a couple of meters away. Needless to say, the child was upset and cried at having been denied such a culinary delight. It appeared that the boy’s parents were consoling him in a ‘well that’s life in the hills’ type manner – which is fair – but I found myself unable to stand idly by. I went over to the vendor and bought another one of these treats and promptly handed it to the boy before shooing away the dog. The boy stopped crying and looked at me in a very confused manner while his father smiled, thanked me and seemed to tell his son something to the effect of ‘well aren’t you a lucky little runt’.

I can’t remember the name of the town and certainly couldn’t point to it on the most detailed map of East Timor. I wouldn’t be able to recognise the boy or his father if I was to see them today but I like to think that this occasion and these aspects of service have resonated in the communities in which we’ve served. Much of the Australian public are more likely to hear about catastrophes in Afghanistan or Iraq than we are to hear about the running water, roads and schools that have been built during our deployments, and while much of the infrastructure we’ve provided may be destroyed, very few of us feel as though our efforts were in vain.

I offer this insight as a means of allowing our local community to understand what life is like for those of us who have served but also to pay homage to those who have been called upon to serve in much harsher conditions and more dangerous circumstances and to commemorate those we’ve lost.

Age shall not weary them nor the years condemn. At the going down of the sun and in the morning, we will remember them.