The late Christopher Hitchens’ released God is Not Great: How Religion Poisons Everything in 2007. He coupled its publication with a series of live debates with various religious leaders where he used his vast oratorical skills to overcome his ideological opponents. But even though he was a masterful speaker and debater, his arguments on religion are weakened by a few fundamental flaws.

One of Hitchens’ core arguments was that he did not require a heavenly body to guide him on how to be a moral human being. He was able to be a good person in spite of God, not because of His existence. But Hitchens was a product of his cultural and social environment, an environment which was firmly rooted in the traditions of Christianity. To claim that his civility was not a result of his civilization is pure ignorance at best.

Hitchens was born in 1949 and grew up in a period when the Church was still paramount in people’s lives. Almost seven decades later and we are witness to a continuing and escalating crisis in Western culture. Our leaders continually seek to make changes under the assumption that change equates by default to progress. Under this paradigm any change is thus seen as being good, and people who enact change are thus assumed to be good people. We have mistaken change for progress, and progress for virtue, and virtue for ethics. And we have done this because we have no faith. 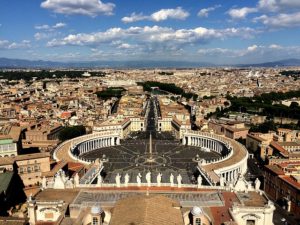 Faith is civilization. Our laws bind our community together, but it is our faith that propels us to follow and respect them. We cannot continue to enjoy the fruits of our civilization if we allow one of its core roots to wither and die. We have eroded our faith in our Church while simultaneously eroding our culture through the banal evils of multiculturalism. Australia is now a mishmash of different ethnic groups, and it is the fault lines dividing these groups where the cracks are beginning to fracture.

The catalyst for fracture was Islam. Nature abhors a vacuum and will seek to fill it. We believed ourselves to be too far advanced for the superstitious nonsense of religion, while ironically falling for the great god of climate change, and into the breach Islam has stepped. But strangely enough, the Islamic invasion may well be an opportunity for the West to rediscover its own faith. The only way we will prevail against an invading religion will be to strengthen our own. And by restoring our faith we will begin to regain our culture. The two are inextricably intertwined.

One of Hitchens’ other false assumptions was that since he himself was able to think rationally and virtuously, then other people would naturally do the same. He projected his own personal traits onto the rest of humanity. Even if Hitchens was not a product of his environment and was essentially born a good and free-thinking man, it is ridiculous to assume the same of men everywhere.

The seething mass of humanity has great need of spiritual salvation, as history has repeatedly shown. It is thus precisely the responsibility of men who have no need of spiritual guidance to attend church in a dutiful manner so as to create a fine example for those that do require guidance in these matters. That is why atheists must go to church. They need to understand that in order to enjoy their civilization and pass it on to their children, they must, by default, preserve its cultural pillars and traditions.

You do not necessarily go to church because you believe in God. You go because you believe in your civilization. And until we return to the Church, we are complicit in the invasion of Islam. You cannot be secular and simultaneously complain about the inroads that Islam makes in our culture, law, traditions, Parliament, leaders, and culture. Islam will become our way of life until we wake up and rediscover our faith.

It is almost as if God has designed it thus. What better way to guide people back to the Church than by creating an invasion that forces us all to act.

This article was originally published at https://pushingrubberdownhill.com/2017/03/22/you-dont-go-back-to-church-because-you-believe-in-god/#more-2408 where Adam Piggott writes regularly and brilliantly.