This article was originally published January 26, 2016.

A lamentable tradition has developed in recent years whereby the Australian national day (26 January – Australia Day) has become an occasion for questioning our head of state and arguing for a Republic, and worse, advocating for a change in the national flag.

This year some otherwise unimportant blowhards in State politics conspired to argue for the Republic. At least they were able to put a coherent sentence together in a way that that is beyond chief republican advocate, that attention seeking ‘bandanna boy’ Peter FitzSimons. Even so, the tired old arguments advanced by the State Premiers were… well, tired old arguments. Personally, I’m quite happy with a long reigning, long living, committed Christian, as our very notional head of state. Some stability is certainly needed whilst we butcher our sitting Prime Ministers at the rate we are presently.

But it’s the annual suggestion that the national flag is not actually the national flag, and not the flag under which Australians fought and died in two world wars and a range of other conflicts, that really heats my blood each year. So some historical facts are called for – not that something as trivial as historical facts will stop the wowsers, the whingers, the self-loathers and the malcontents. But facts they are, so here we go.

Fact two – the flag was in fact chosen in a competition from among a number of other entries in 1901 and proclaimed to be at that time ‘the Australian flag.’ It was first flown as such in Melbourne (then the capital city) in September 1901.

Fact four – it is a complete myth that Australian soldiers did not fight and die under the current Australian flag in the two world wars. Countless memorials in glass, stone, or other material, dating from the First World War and the Second World War, show the Australian flag, often alongside the Union Jack. 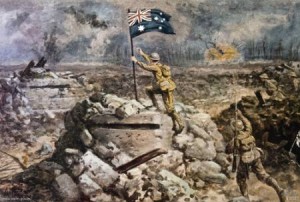 The picture accompanying should put to rest once and for all the malicious myth that Australians did not fight under the Australian flag in the First World War. It is a 1930 painting of a famous incident described by the much decorated Joe Maxwell (winner of two Military Medals and the Victoria Cross), who never forgot the sight on the battlefield at Polygon Wood near Ypres, in 1917, when a lone Australian soldier rose from the trenches to raise the flag as an important objective was taken in an especially difficult and costly action.

These are the facts. The Australian national flag is just that and has been since federation in 1901, when the six separate colonies became the single nation we celebrate today.

Editor’s note: Boethius was particualrly eager to respond to the following screed from a certain has-been media figure: