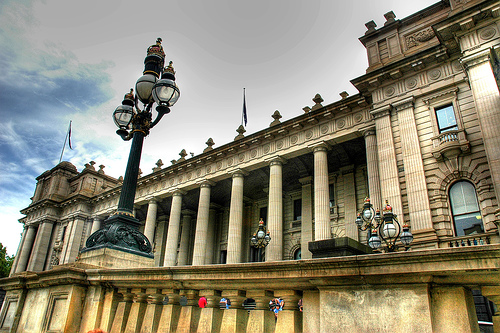 Several recent infamous bail decisions (among many) stick in Victorians’ throats; the Bourke Street Islamic terrorist Dimitrious Gargasoulas was bailed just days before his massacre, and in recent days the African who kicked a policeman in the head at Highpoint Shopping Centre in Maribyrnong was released on bail.

This lax approach to bail has coincided with an increase in Victoria of aggravated home invasion, aggravated burglary and carjacking, and the concern that police are becoming “punching bags”. The African street gang Apex continues its rampage throughout Melbourne, while our officials and so-called community spokesmen insulting our intelligence by insisting that the problem does not exist.

Jennifer Oriel in an article for the Australian has identified the ideological virus being spread by left-wing SJW judges into our justice system:

“(P)olitical ideals such as restorative justice and therapeutic jurisprudence.”

“The term therapeutic jurisprudence is generally attributed to academic David Wexler from his 1987 paper on mental health law. US district court judge Martin Hoffman describes the TJ movement as a cross between New Age anti-intellectualism and rehabilitative moralism. It is an activist movement that denies the social benefits of retributive punishment by replacing black letter law with specialist courts modelled on the therapeutic ideal.”

How this works in practice:

“TJ advocates that the law is a therapeutic agent and social force. The movement began in mental health and drug courts, with a focus on the concept of disadvantage and marginalisation as causes of offending behaviour. Austra­lian legal academic Arie Freiberg explained that the development of problem-solving courts represented a shift from focusing on ­offenders’ criminal conduct to their “problems and solutions”.

“One gains the impression that many TJ advocates are engaged in a kind of virtue-signalling where the efficacy of courts is measured not by the faithful application of legislation and just punishment for crime but the degree to which criminals emote and judges manage their emotions. In a 2011 paper, Hoffman describes a therapeutic court in a scene evocative of the film Idiocracy. A judge roams around the court mic in hand “like a talk-show host”, prompting an offender renamed a “client” to confess his crime and emote about it before coaching him to ­denounce the past. They celebrate his rebirth with courtroom ­applause, a certificate and pen.”

Oriel names two Victorian judges as slaves to this ideology:

“Victoria’s deputy chief magistrate Jelena Popovic is a leading advocate of therapeutic jurisprudence. A turning point in her legal life came when she discovered the law could be “an agent for ­social change and social justice”. In 2008 she wrote: “The Magistrates Court of Victoria (is) operating under the principles of therapeutic jurisprudence.”

“Another TJ advocate, Victorian magistrate Pauline Spencer, sits at the Dandenong court. Dandenong is one of Australia’s most multicultural suburbs. The Apex gang is named after a street in the area from where its founding members hail. In a 2012 paper, Spencer recommended making the therapeutic model mainstream and noted it would require “systemic and cultural change”. In liberal democracies, however, making systemic changes to the law is generally understood as a matter for parliament and the people, not the ­unelected judiciary.“

And Oriel provides evidence that TJ is being institutionalised:

“Yet ­consider a bail program that ­operates in eight court locations in ­Victoria. A program brochure published by the Victorian Magi­strates’ Court states: “The CREDIT/Bail Support Program seeks to increase the likelihood of an ­accused being granted bail.” Isn’t the law supposed to be ­impartial?“

The bold section of the last two quotes highlights the question many Victorians must be asking:

If elements of our judiciary are actively attempting systemic changes to the law, to the point where the law is no longer impartial, can we remove these judges from office?

The answer is yes [courtesy of “dot” at CatallaxyFiles:

Section 87AAB (page 149) of the Victorian Constitution provides for the removal of judges from office:

It would require a “special majority” of both Houses of the Parliament, and it would need to prove “misbehaviour” or “incapacity” on the part of the judge. The approval of the Governor General would be required to appoint the investigating committee, as stated in Section 87AAD (page 150):

Thus, a mechanism exists in law to take on the SJW Victorian bench and restore order to our state. In the hope that we can oust our current communist overlords in the next state election, we would like to put the question to XYZ readers, again courtesy of our friends at Barbaria Politica: