Until Melbourne the Protests against Milo were a little lacklustre. 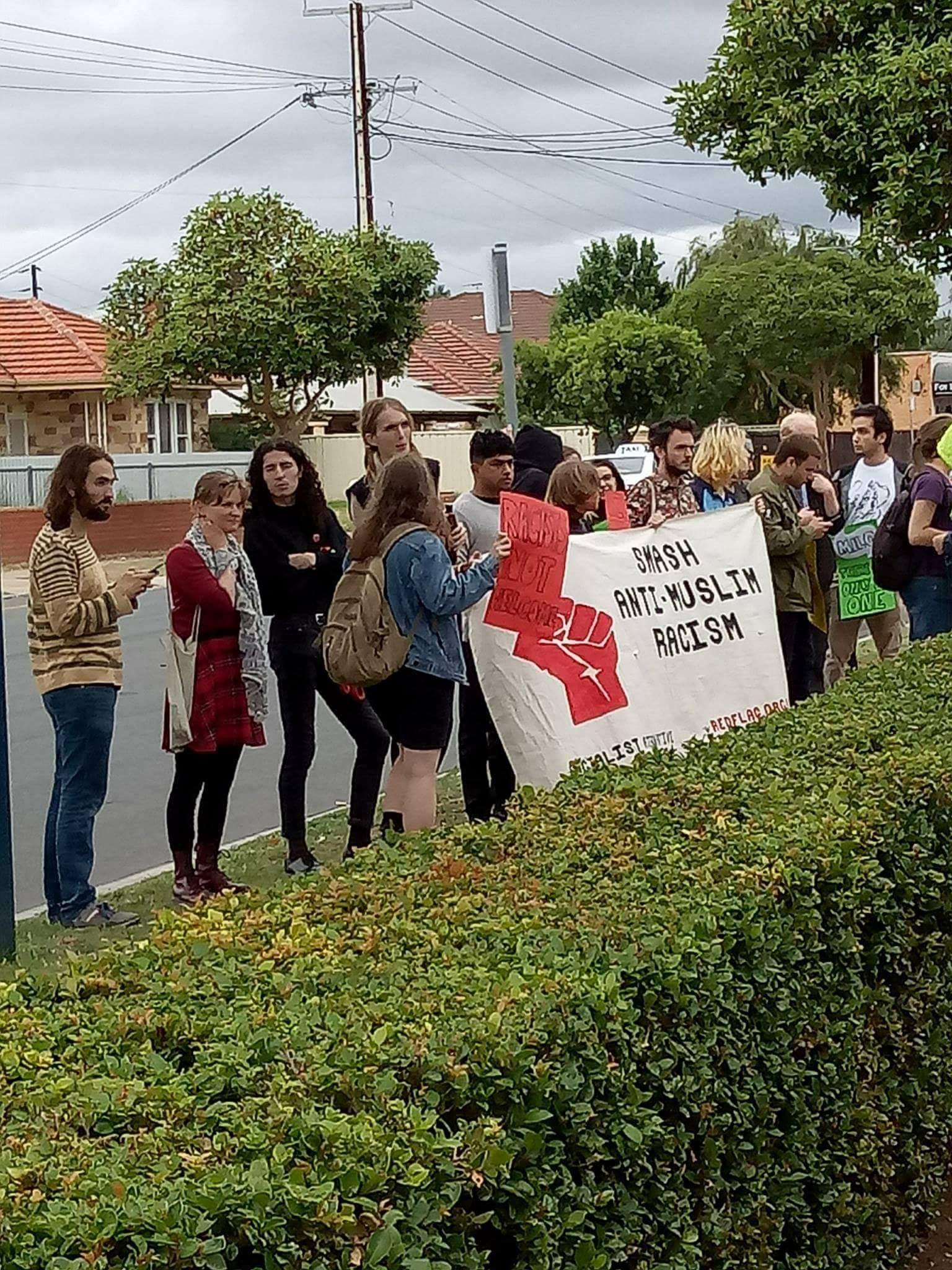 In Adelaide the Socialist Alternative joined forces with the local Anarchists from The IWW and managed to scrape about 15 people. In Perth the United Against Racism and Bigotry group [which consists entirely of Socialist Alternative members] managed to get almost fifty far leftists out on the streets. In contrast the two Milo events attracted over 2,500 paying attendees.

It’s fair to say the far left didn’t quite live up to the hype they had laid down.

But never fear, Melbourne would provide! After all, this is the centre of left wing extremism in Australia. Melbourne is the heartland of Socialist Alternative; the largest most violent and best organised political extremist group in Australia. Socialist Alternative founder, Guardian opinion writer and male pattern baldness sufferer Jeff Sparrow himself had called for leftist radicals to flood the streets.

The Campaign Against Racism and Fascism [another SAlt front group] had been organising for months. They would show this upstart who is and isn’t allowed to speak in Melbourne! One of the only non-Socialist Alternative linked members of CARF, the quite literally insane American-walking-corpse-in-a-red-wig Debbie Brennan had been screeching online about the need for the extreme left to unite to stop the menace of non-left approved speech. Members of the Socialist Alliance, the local Anarchist scene, the Freedom Socialist Party and the now nearly defunct Socialist Party answered the call.

They were on the march! They were going to stop this racist-homophobic-gay-Nazi-Jew and his stupid opinions about Clementine Ford, Aboriginal art and the Opera house!

They gathered outside the venue, instantly lowering property values. Channel Seven news said there were six-hundred of them, which judging by the footage and the photos taken by the leftists themselves is ludicrously high. The Fairfax press said 150 at first which seems low. A fair estimate is probably somewhere in between.

Which means despite even trying to empty the local high rise commission flats [by screaming at the mostly African recent immigrant occupants that Nazis were coming to get them] the far left in inner city Melbourne still managed to be massively outnumbered by Milo’s paying guests.

They attacked police as usual and got pepper sprayed as usual. They threw rocks and streets signs and chanted their ridiculous chants that make sense to no-one bar themselves and their sociology professors. Amusingly they tried to gang-bash the small group of patriots who had turned up to bait them and got hilariously stomped into the ground.

One picture where a black-clad self-appointed revolutionary found himself flat on his back warding off the punches of his intended victim was particularly delicious. The photo shows the self-appointed hero of the working class wearing brand new-never-used unscuffed and unlaced work boots while the patriot on top of him is wearing a hi-vis shirt, tradie shorts and a pair of steel caps that had clearly seen better days. 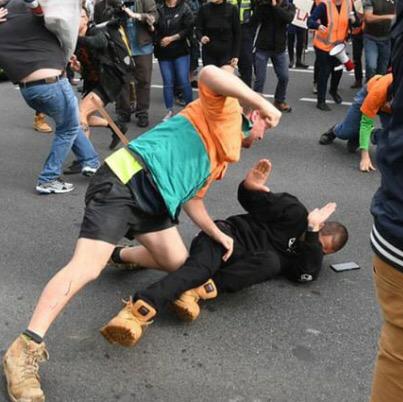 Judging by reports both from XYZ writers and from other attendees the evening inside the event went great.

Suzie O’Brien of the evil-right-wing-Murdoch-conspiracy Newscorp declared that Milo was a sexist-racist-bully who says mean things and should be kicked out of the country. Her fellow Murdoch minion, the amusingly named Simone Fox Koob described the leftist extremists pelting police with everything from rocks to fireworks as “anti-fascists”.

Guys, I think we need to get a better evil right wing media conspiracy, the Murdoch one the left constantly whinges about seems to be broken.

The more traditionally left parts of the fourth estate were hilariously spittle flecked. Melissa Cunningham of the Age seemed breathless as she repeated each one of Milo’s evil viewpoints as if each one in and of itself was condemnation enough.

The Illawarra Mercury helpfully pointed out that Socialist Alternative organiser Chris Di Pasquale was leading the leftist mob, and not so helpfully [but sadly predictably] failed to point out his connections to violent extremism. Jon Faine on Melbourne ABC Radio interviewed a “reformed extremist” who appears to have been part of a gang back in the 80s to try and get an insight into the minds of the evil right.

Milo seems to have driven authorities a little batty as well.

On 3AW Victorian Assistant Commissioner Stephen Leane said police would bill organisers of the event in order to recover some of the thousands of dollars spent in controlling protesters. I don’t like his chances in court if he’s talking about trying to bill Milo or his sponsors at Penthouse just because far left extremists feel themselves justified in attacking anyone who disagrees with them.

Going after SAlt in the courts on the other hand could actually be a good move as it might help keep down the violence at future events, which is of course why the Victoria Police hierarchy won’t do it. This is the same Government after all that hired SAlt organiser, open Marxist and Safe Schools activist Roz Ward, who incidently helped organise yesterday’s SAlt march, to help formulate the Victorian school curriculum.

The same cop then astoundingly said this about the diverse “youths” who came down and attacked his officers:

“There’s no doubt that we’ve had some issues with the Kensington community and particularly the African and the African Muslim community in Kensington, and we’ve spent years spending time with that community,” he said.

“If you’re young and angry and living in a commission flat and this thing’s happening outside your place and the opposition side is screaming taunts which you find personally offensive, I can understand why they wanted to join in.”

One of his officers had to be treated for injuries, but that’s all O.K because the high spirited youths just “wanted to join in”. I’m sure the men and women serving under Assistant Commissioner Leane are delighted to hear him publicly share such sentiments.

One of the more insightful responses was from the aforementioned founder of Socialist Alternative Jeff Sparrow himself. It seems Jeff has become a little preoccupied with Milo recently; his only two Guardian opinion pieces since September have been about the flamboyant Englishman. Jeff spent a few thousand words being snarky and sarcastic but beneath the skin of his articles lays a real fear that’s so substantial you can almost smell it.

When Jeff was growing up he was the rebel, protesting Austudy, founding Communist extremist groups, usual early nineties stuff. But no matter how he and others like him sneer, the long awaited comeuppance of an authoritarian establishment left that has deluded itself into thinking it’s the brave underdog for five decades now is coming.

The Socialist Alternative group, other Australian Marxist groups and their friends in the even more openly terroristic Antifa form mobs to beat up people on behalf of ideals shared by almost every single powerful group in our society and sometimes with their express approval and applause.

They are the fists of the powerful punching down at the powerless, and watching them twist themselves in knots trying to justify it is incredible.

When even Walmart is selling Antifa Hoodies, just how much longer can the extreme left keep telling themselves they’re fighting the system?

Jeff and the people like him aren’t the rebels anymore, and that confuses and scares them.

So it should. If the extreme left has the support of the entire establishment and can’t even win in Melbourne, where in Australia can they win?