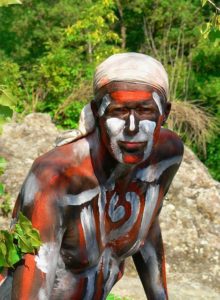 I had a wonderful discussion recently. An acquaintance informed me of her, and my guilt, for the sad plight of a multitude of cultures we could not even bother to name, as part of our heritage. I might add, this was a young lady from a country explicitly committed to neutrality, and with no history of colonisation nor war mongering.

A chorus rose up in response. I am not guilty. I did not destroy any culture.

And thus the debate ensued.

Have you ever felt guilt for the Neanderthals’ extinction? If guilty for one culture’s malaise, then why not for the extinction of a noble species we rubbed shoulders, and even bumped uglies with, during the time of Indigenous Australians’ undisputed habitation of Australia?

I also think we are probably guilty for the extinction of our Hobbit-like friends in the Indonesian archipelago. But not losing sleep over it, nor demanding reparations. Yet.

No, let us stride forward into the battlefield of why we should be guilty. “We” “interrupted” “their” culture(s), I was informed.

I scratched my head. There is something to that. Then I wept for the British. They were almost interrupted very rudely by the Nazis in living memory. Heck, their culture HAS been broadly interrupted in recent decades, down to a changing face and ethnicity and religion and so much. But I do not feel guilty. How about the fact they were invaded, and conquered, and raped and pillaged and so much more for, well, millennia? Nope. Not guilty.

Now, you have to admire those tenacious Jewish people. Sure, they are pissing everyone off in the West Bank and Gaza and all, but wait a minute… should I not feel guilty for the cursed Jews? Is the Levant not somewhere we would award, if they were Aborigines, native title? Actually, no, and I will leave that guilt for the Egyptians, Romans, Persians, Arabs and others who have interrupted the Jewish culture.  (British and Australian guilt has a basis here. We have occupied Jerusalem in recent centuries, so why not smear some guilt around.) The Arabs, Persians and Egyptians seem uncommonly unified in contemporary times, in the objective of genocidal eradication of those cultural-interruption-resilient Jews. Thus, the Jews are, perversely, Guilty.

Then the wind carried a whisper of the words “Cultural Darwinism”. What the heck was that and what does it have to do with anything? Well, I allege that we are guilty of being the product of positive cultural evolution. On that charge, we are guilty.

Our community service orders us to undermine and erode our own culture, but to be blind to this fact. I proposed that our own culture has changed during the last twenty years in many ways, often for the better. Generations flying abroad for leisure on cheap flights, mass media, abandoned churches, Sunday trading, music festivals and a plethora of changes. We are not stuck in the past. But we cry for those cultures that have been interrupted and wish we could return them to the past. I wear no kilt, play no bagpipes and eat no haggis, nor do I repel invading Brits. And it’s not a problem for me.

For our Indigenous Australian friends, I genuinely wish they can embrace the contemporary culture, and in their leisure time, embrace their traditional culture. Heck, do re-enactments, dress up, dance, teach the language to your children, preserve oral traditions. Maybe lay off some of the more, how do I say this, criminal by Australian criminal law practices, and who knows, maybe they too can be guilty.

Happily, our progressive friends should exonerate future generations from such guilt.