Since the Brexit referendum in 2016, the momentum of secessionist movements has been building across the West. The most notable of these are in Catalonia and the Basque country in Spain, Scotland in Great Britain, and California and Texas in America.

One option which has shot to prominence recently is Australia’s multicultural hotspot, Melbourne. This makes a lot of sense, as Melbourne differs greatly from the rest of the country on ethnic, cultural, political and culinary lines.

Cultural differences have been particularly exacerbated in recent years since the introduction of poker machines and lockout laws in Sydney. The subsequent hollowing out of Sydney’s night life has led to a massive influx of Sydney’s musicians to Melbourne, who have in turn bolstered the numbers of effete, inner-city hipsters to the point where they are spilling into the outer suburbs and taking their good coffee, intolerance of bogan culuture, and unaffordable house prices with them.

Also, Melbourne has been swamped by Asians.

Adam Piggott put it quite well:

“I will state it for the record that Melbourne and Sydney are not Australia. They are some sort of hybrid futuristic nightmare landscapes, completely detached from the Australian culture that exists outside their boundaries. But these multicultural megalopolises suck in the wealth of the nation as governments frantically attempt to patch over the ever widening cracks that these gigantic disasters are beginning to fall through.”

Ironically, many Melbourne residents are under the mistaken impression that the characteristics which set them at odds with the rest of the continent actually make them better than the rest of the country. Tensions have thus risen to the point that memes such as the following are a current occurrence on Australian social media: 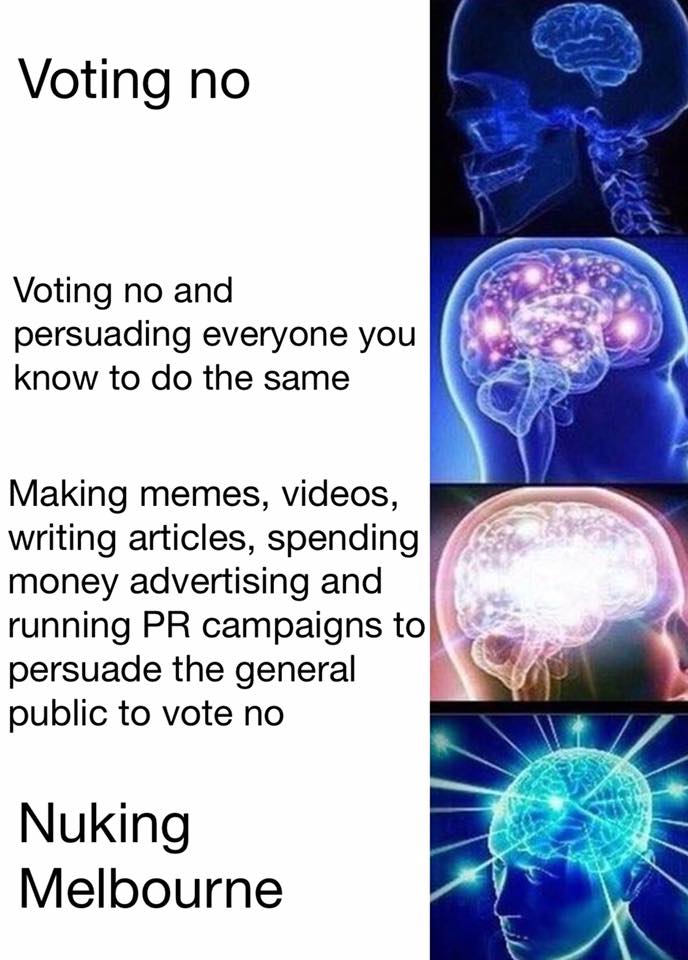 It is thus that the recent birth of the Melbourne Secessionist Movement (MSM) offers a way forward for all current and potentially former Australians. It is with these hopes in mind that we present to you this XYZ Viewer Poll.

Should Melbourne secede from Australia?

Let us know in the comments whether you think Australians will still be happy to supply Melbourne with food once it’s gone. Furthermore, does Melbourne need more festivals?