Their ABC have run an article today raising concern that the No campaign may actually succeed in the campaign against gay marriage. Remember when they used to refer to John Howard as a very clever politician? Similarly, they pay the makers of the No campaign’s first ad a back-handed compliment: 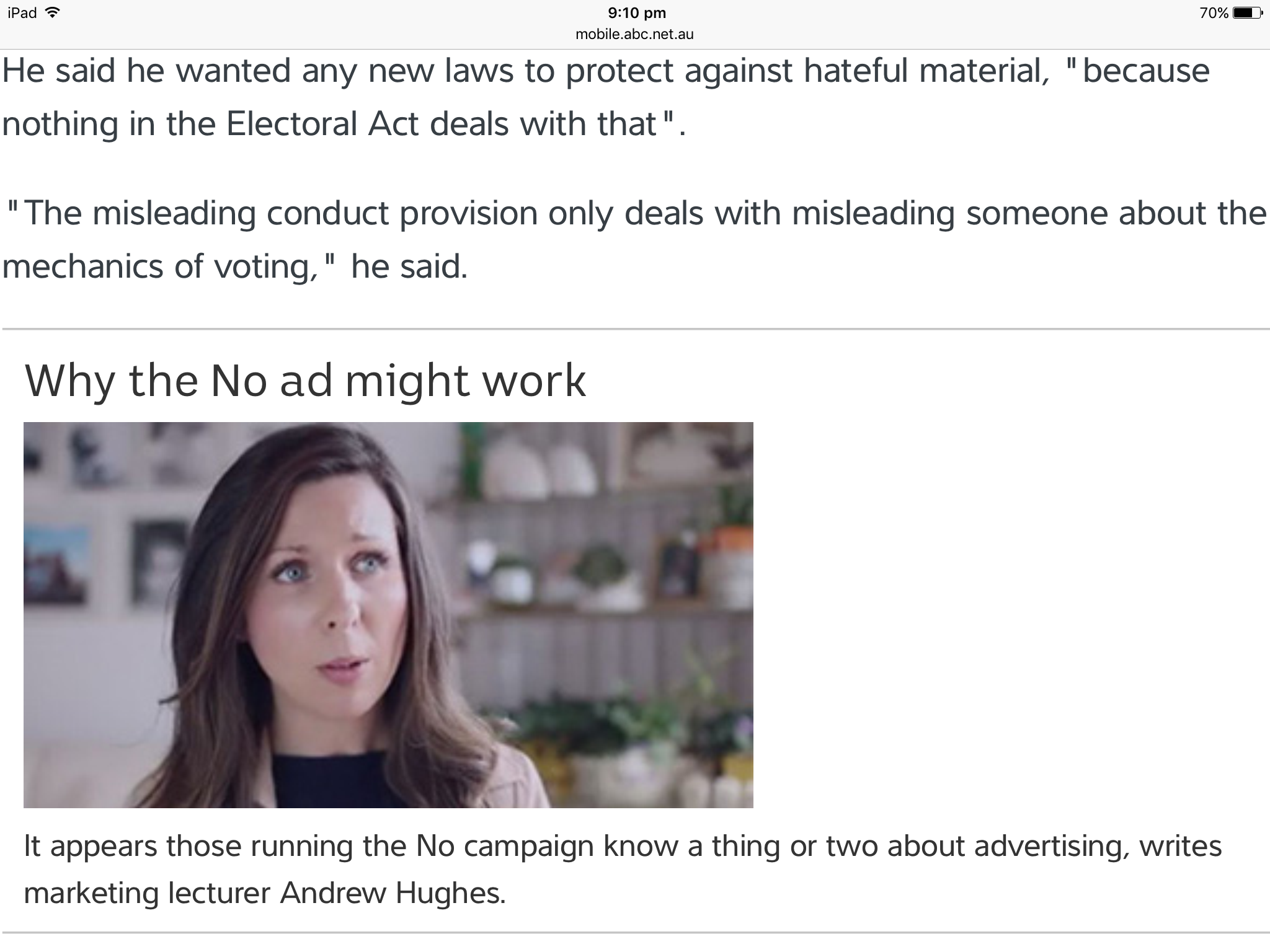 “It appears those running the No campaign know a thing or two about advertising.”

This is code for:

Those sneaky right-wingers are using clever messaging to brainwash the uneducated bogans.

The author lists three key factors to successful messaging in the ad; Women soften the message, it doesn’t take marriage head on, and the ad keeps it short and simple.

One gets the impression the real reason they’re worried is that the right are learning their tricks. Watch out lefties, we’ll be marching back through the institutions before you know it.

Talking of reestablishing dominance, the Yes vote is being trounced on the internet. XYZ hits have been very solid on the issue, and leftist activists are literally losing their minds. They acknowledge, when talking amongst themselves, that their bullying tactics have backfired. I’ll leave out the torrents of abuse, but this screenshot says all you need to know: 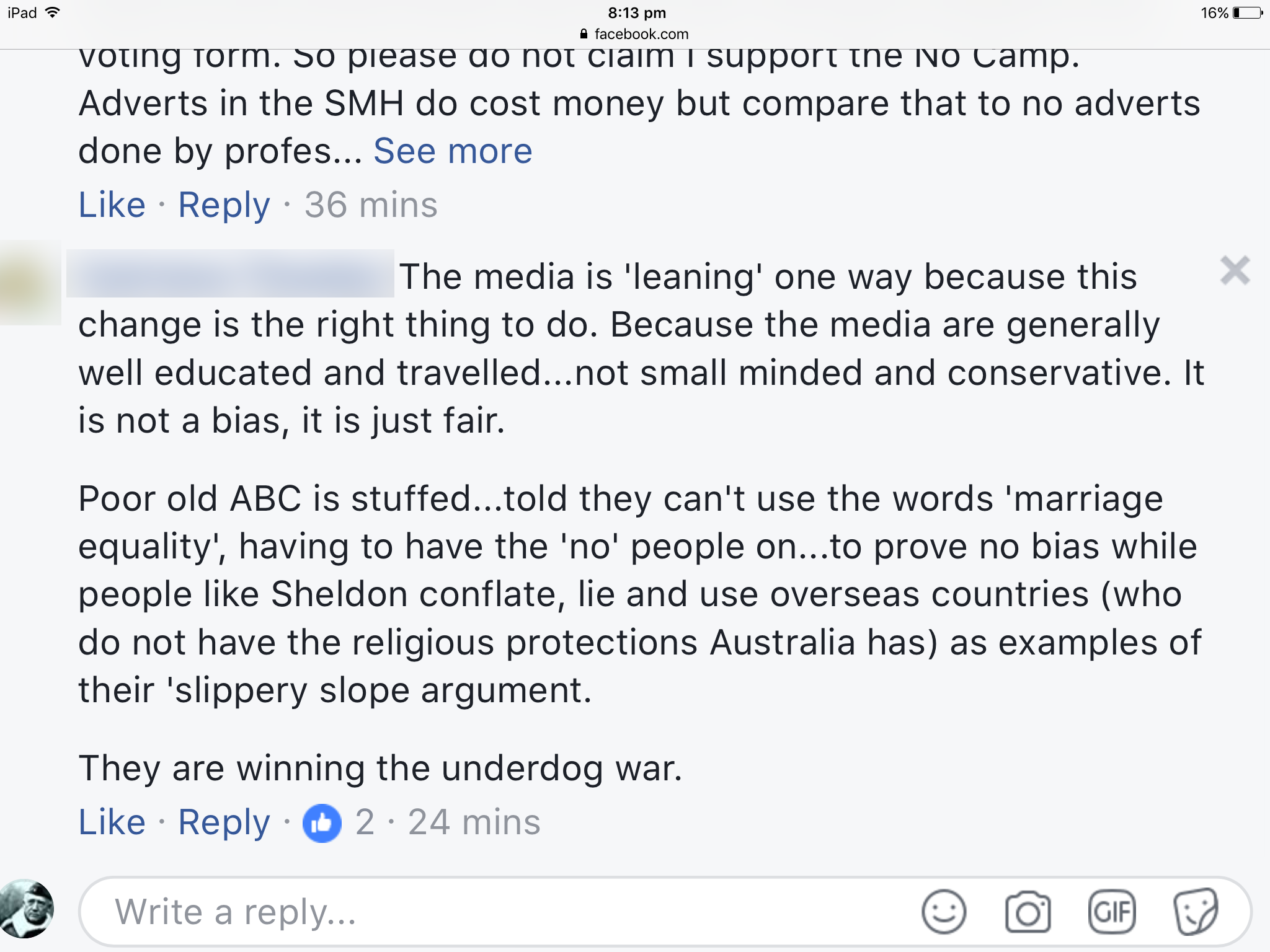 The left know they are losing. They keep pulling out the tired old line that pointing out what could be the logical consequences of making such a dramatic change are “conflat(ing)” and a “slippery slope”, etc, but the reality is, they can see the writing on the wall.

The message to take from this is to keep pushing; don’t let them get off the canvass.

But it is worth considering what comes next, too. This screenshot should leave us a little more circumspect: 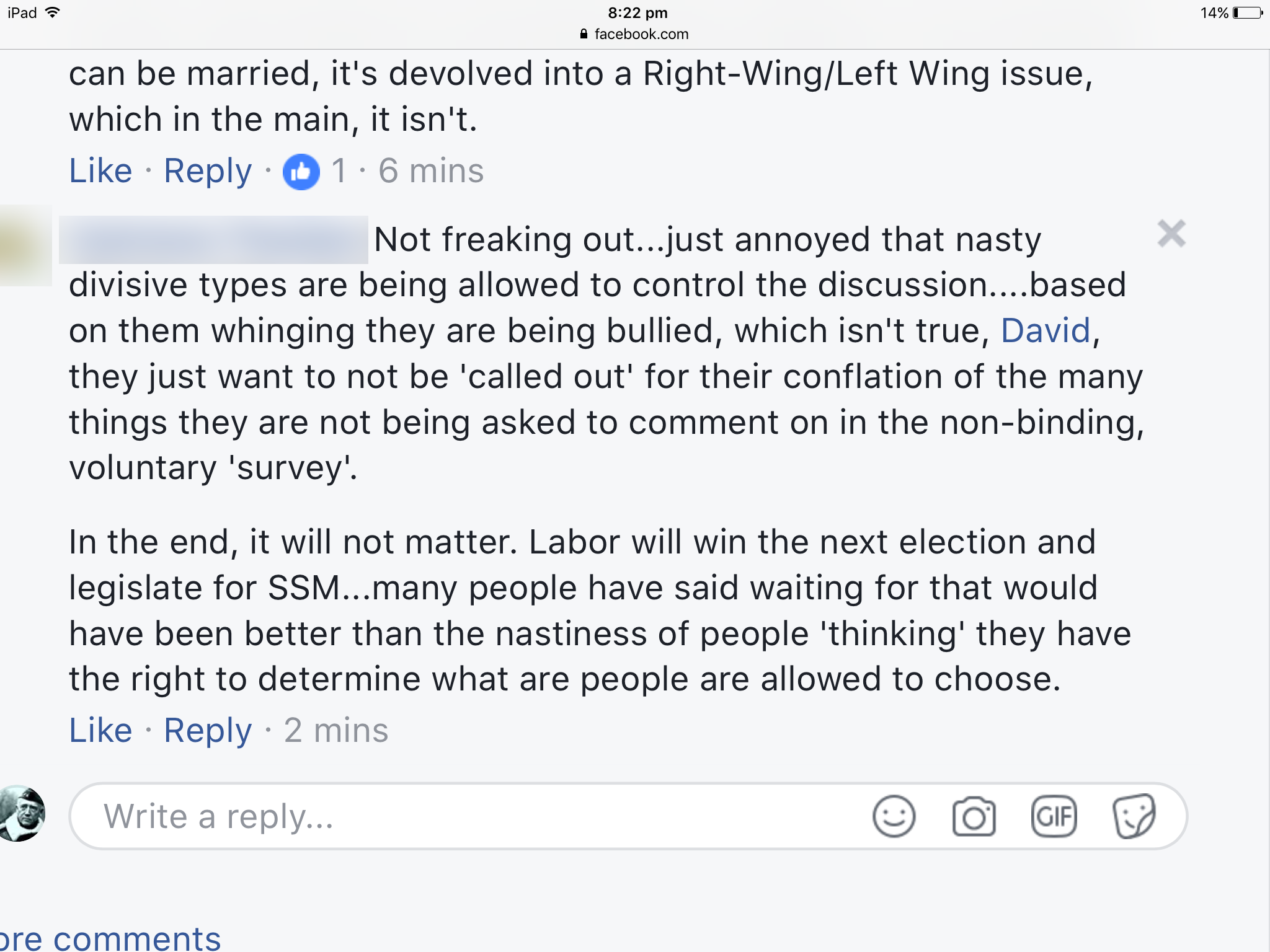 “In the end, it will not matter. Labor will win the next election and legislate for SSM.”

The right is currently energised, because we are fighting for a single issue, an issue which goes to the core of the traditional family, of religion, of freedom of speech, of our civilisation; ie, all the things the right holds dear.

This should be a signal to right-wing politicians in parliament.

The Liberal Party under Tony Abbott was voted in under the promise to fix the budget deficit. Abbott was also someone who stood for traditional Australian culture and our British heritage. Yet the Liberal Party committed to several Labor Party policies which weren’t even funded, and it lacked the numbers to get crucial reforms through the Senate, so the surplus naturally continued to rise. Now, we have a soft-left, opportunistic traitor in charge of a Liberal Party whose government has let the total government debt approach 750,000,000,000 dollars.

The people reading this post may understand that we may have to swallow our bile and vote for the Liberal Party in the lower house, and preference the Libs after One Nation and Australian Conservatives in the Senate, because we know that if Labor get in, SSM is in, Safe Schools is in for good, refugees will flood us at record numbers, the economy will tank, and free speech will be dead.

But who do you think the swing voters are going to vote for? The Liberals have had two terms, Turnbull has achieved nothing, and he scraped in by the skin of his teeth last time.

Who do you think most conservatives are going to vote for, when the Liberal Party appears to be a slightly less socialist version of the Labor Party?

The XYZ took control of the agenda in a dark corner of the internet on Sunday with a stupid prank. There is plenty more where that came from, but a lot less stupid, a hell of a lot smarter, and the next time it happens, it will be ten times bigger.

You’ve got 18 months. What are you prepared to do?