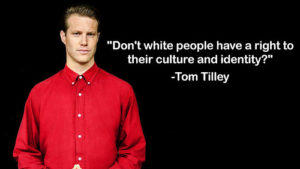 The white supremacist neo nazi host of Triple J’s program Hack, Tom Tilley, has doubled down on racist comments he made in yesterday’s show, in an at times homophobic monologue which witnesses have describes as “rambling.”

Shortly after complaining that “the AFL is run by lesbians” Tilley had the following to say:

‘You know, we have to look at ourselves and say, it is really, totally important that people like us – not that we hate people who aren’t like us, just that we like, think that having groups of people who are distinct from each other makes each group more, like, special – so, I’m saying that people like us, however we chose to define “us” as, need to make sure we continue to exist, because we need need to ensure a future for our children, because children are our future.’

You can hear a recording of today’s show here. Although widely condemned in the media and in Federal parliament, Tilley remains unrepentant, declaring to waiting media:

‘I’m just trying to make the world a better place. Love is universal. Peace, tolerance, and race realism are universal too. I just want everybody to love one another.’

Local Antifa are believed to be on Tilley’s case, with professor Rob Sparrow of Monash University, the man behind Slackbastard, reported to have said:

‘We plan to find out who this guy works for and doxx him. As soon as I get out of bed.’