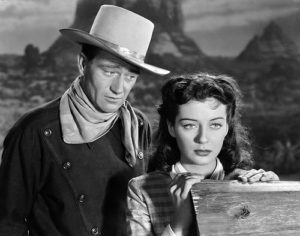 I love Sunday afternoons for many reasons. A big reason is the old movies that get played on TV; often they are Westerns, often they are war movies. Watching these movies, in which dialogue, drama and suspense are the driving factors, and many a scene, one liner, facial expression or monologue will have multiple meanings, makes me think about the narrative we have been taught about our recent past, and the way these old movies are commonly presented.

In high school we were taught to “analyse” the way in which the portrayal of the Vietnam War changed between the 1968 film Green Berets, starring John Wayne, and the 1986 film Platoon, starring Charlie Sheen. In reality, we just regurgitated the anti-war line about the “perceived Communist threat” our teacher wanted us to learn. Through education, especially university, through movies, and television, the 1950’s era is derided as a bigoted blight we’ve well and truly left behind, but when I see these movies I see people unselfconsciously being themselves, speaking their mind, asking no favours and giving none in return.

A couple of years ago when I visited MONA in Hobart, one art instillation consisted of the tape from cassettes of old war movies made into a vagina or penis or something, in an attempt to subvert the way in which old war movies supposedly glorified war…or something.. When I watch these old war movies, of which there were a plethora, I see a generation which was working its way through the horror and trauma of two all enveloping wars, celebrating the fact that they had battled totalitarianism and won, and struggling to deal with the fact that they were still at war with another form of totalitarianism.

I think there are lessons we can learn from this time- the unabashed self-confidence, despite the supposed restrictive social roles; the working through of difficult social and political issues with a clarity and insight which is rare these days; and the deep commitment to the moral and intellectual foundations of Western civilisation.

And, just maybe, we’ve been fed a bunch of baloney about how bad the 50’s were.