A favored ploy of globo-homos everywhere to defend any obvious inconsistencies with the righteousness of their grand plans is to compare themselves with an example that is far worse than their own. Perhaps we have a talking head being interviewed on some sclerotic talk-show on the subject of youth unemployment. The proffered “expert,” (which is now a profession in of itself), will defend the indefensible by comparing his nation’s poor record on this matter with somewhere like Greece.

The assumption is that everyone everywhere is suffering the same problem, in other words the circumstances are far beyond our control, but our shit is an order of magnitude lower than their shit, so we are actually doing really well indeed, under the circumstances of course.

The expert is indeed an expert in such misdirection. A novice might attempt to compare the nation’s youth employment woes with somewhere like Liberia, but this would instantly create an absurd false equivalency, both for the fact that comparing a nation like Australia to an African hellhole is ridiculous, as well as the likely scenario that a fair number of viewers couldn’t identify Liberia on a map for $100 on Who Wants to be a Millionaire?

But using Greece is a smart move as it is considered a Western nation with at least one foot in the First World. Of course, the reality is that he is trying to make shit appetizing by comparing it to even nastier shit.

Recently, Australian politician Cory Bernardi has been on a barnstorming tour of the country’s nominally conservative jurisdictions as he promotes his new political party, the Australian Conservatives. The events have been reported as being “sold out” which I suppose isn’t that difficult when you book venues that can only hold a few hundred people.

According to their adverts their membership list is now approaching the numbers of the Liberal Party itself. Once again, this sounds impressive until you realize that the sort of numbers we’re talking about here are in the low five figures. It doesn’t really matter how big a party’s membership is in Australia due to the fact that we have the anti-democratic reality of compulsory voting.

Bernardi’s big schtick that he is pushing is giving democracy back to the people. From his weekly email this week I received the following:

“It seems an increasing number are waking up to the fact that government is no longer an ally of the people but an impediment to freedom and prosperity. Every government ‘fix’ creates more problems which entails a further ‘fix’ which only creates further problems… and on and on it goes.

“Last week at a meeting in Sydney I asked a group of people if they trusted the government. Of the more than 450 in attendance, not one raised their hand.

“That begs the question: if you don’t trust the government why do you want more of it?

“Australian Conservatives know that the best form of government is self-government. We need to trust the people to make decisions for themselves and in return expect them to take personal responsibility for those decisions. That is a better way.”

It sounds good, it even sounds great; only this message would have been much more relevant and effective ten years ago. But going by annual immigration figures, since that time the government has brought in over 2.5 million immigrants, plus around a quarter of a million refugees. And this to a country with a population that just squeaks over 20 million.

So the people that Bernardi is referring to aren’t the same people anymore. He’s offering a false hope. It might sound good, and it might fill the average despairing Australian with warm fuzzies, but at best he’s only going to kick the can down the road.

The only political subject that counts as of this moment in the Western world is demographics. That’s a fancy word for saying, how many of them there colored people have we got, why did we let so many in, why the hell aren’t they assimilating like they’re supposed to, why are they out-breeding us at an alarming rate, how many of their family members are they importing, why do they insist on spreading around barbaric religions that are incompatible with our culture, and what on earth are we going to do about this? 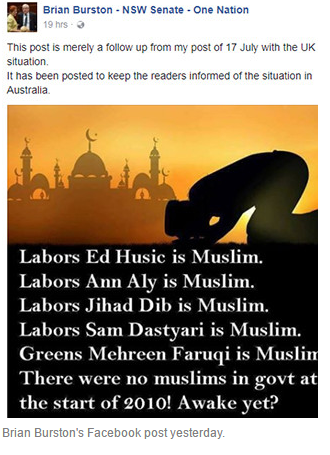 “But what have they done to be singled out in such a post in such a way? Has any of them made a serious political point based upon their religion, proposed any law or policy related to their religion or sought even to make a significant issue of it? Burston did not criticise any aspect of their public statements, party affiliations or personal standing. He just branded them Muslim, against an Islamic backdrop, and suggested that perhaps life was better seven years ago when they weren’t in parliament.

“I was so surprised by this ugly finger-pointing that I wondered if it might be fake. But when I rang Burston he confirmed immediately it was his post and when I asked what he was trying to say he merely insisted it was factual.”

The comments following the article leave no doubt as to the general public’s views on this matter. As far as they’re concerned Senator Burston is right on the money.

Noticing this stuff has been taboo for a very long time. But smart people ask difficult questions, and if you drive them away they’re going to gravitate somewhere:

“In the fullness of time, the smart kids get to be right. That’s the lesson of history. The people who rule over us are trapped in a frenzy of purging anyone who notices anything about the world. They are systematically and aggressively estupidizing themselves, by driving off anyone with the temerity to ask a question. By herding all of the smart white guys into the Dissident Right, they are not saving themselves. They are creating the army that will destroy the prevailing order.”

To his credit Bernardi has been asking questions about Islam. He’s been asking them for as long as he’s been in parliament and he’s got into a lot of trouble for not toeing the accepted party line and keeping his mouth shut. If you watch this short video clip of an interview he did recently with Andrew Bolt you may be convinced that he’s on the money in this regard. I was, at least until I got to the part where he outlines his intended actions.

His solution is to lower the immigration rate from over 200,000 per year to 100,000, and then to ask some ‘hard questions’. The only reasonable option that is left on the table is to shut the gates completely and work out what we’ve already brought in. Anything less than this is not just delusional, it risks moving towards the next inevitable stage which is to start getting rid of people, whatever form that may take.

Supporters of Bernardi will no doubt object at this point that at least he’s doing something, and why aren’t you supporting him instead of being such a mean nitpicker? But as I’ve already stated, just doing something isn’t what’s needed here. The required action is to do the unthinkable as far as mainstream politics is concerned. Half measures are simply a false mistress in the ugly demographic reality in which we find ourselves. How on earth can Bernardi justify continuing to support an annual immigration intake in the six figures? There is no such thing as a skills shortage mainly due to the fact that Australia is well down the road to being a low skill society, what is also known as the third world.

During the last federal election a prominent journalist accused conservatives of being delusional for wanting to hold onto conservative principles. This spawned the term ‘delcons’ which many on the right have since worn with pride, much like the deplorables moniker in the US. But perhaps it is indeed accurate in an unintended way. The actions of our politicians over the last two decades that have completely transformed Australian society, and with no consultation with the electorate as to whether this was warranted or desirable, have left us with a demographic reality that has eclipsed modern political thinking.

Bernardi and his ilk are akin to generals on the Western Front sending marching troops into machine gun fire, unaware that strategies and tactics have changed, and unable to adapt even if they recognized the grim reality. In attempting to continue to play the political game in a familiar manner they are indeed delusional. And what they are offering is merely a lighter shade and tone of political excrement.