From an anonymous contributor.

The aim of the same-sex marriage movement is to change the definition of marriage, not marriage equality. All the talk of equality is just so the Left can present itself as the side which fights against inequality and injustice: “the good guys”. This way, they can more easily win supporters to their cause, because people like to think of themselves as good, and on the side of justice: “What’s wrong with you, are you against equality? Why are you against marriage equality, then?” 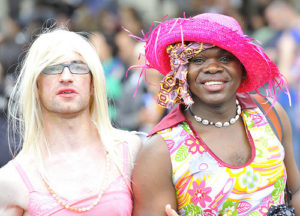 1. Two men in a relationship, or two women, are not the same a man and a woman. This can be easily demonstrated in real life. Imagine meeting three groups of people on three different occasions. The first group is two men, the second is two women, and the third is a man and a woman. Will you act exactly the same towards each of the three groups? Will they act the same way towards you?

2. A man and a woman have the potential to have a child, but two people of the same sex lack that potential.

3. That potential to have a child is the entire basis of the continuation of our species and our civilisation. There is (roughly) a naturally-occurring 1:1 ratio of males to females in the world. The legal union of a man and a woman, aka marriage, reflects and supports these facts of nature. Same-sex marriage doesn’t reflect those facts, or contribute to future generations of human life.

4. A man and a woman have complementary sex organs; a same-sex couple doesn’t.

5. When a man and a woman can‘t have a child, it’s unfortunate. A same-sex couple, in contrast, can simply never have their own child; it’s never a question of ‘fortunate’ or ‘unfortunate’.

7. A same-sex couple uses a sperm donor or surrogate mother to obtain a child because they never had any other option. An opposite-sex couple does so because the first option is no longer available to them.

8. Any child raised by a same-sex couple is not the equal of a child raised by its own parents. In the former case, the child is denied one or both of its natural parents, and may when older have a yearning to seek out his or her biological mother or father. This is a common occurrence already. But in the latter case, the child is not denied its parents, and is allowed to be raised and loved by the same parents to whom it is related, and who brought it into existence. Such a child will never yearn to find any lost parent; his or her parents will be at home.

10. A same-sex couple lacks the ability to provide a child in its care a role model of both male and female parenting. An opposite-sex couple, whether the child’s own parents or foster parents, does not lack this ability.

11. The Left argues that gays have historically been denied the right to marriage. This is false. They have always been free to marry, but it’s been a bit harder for them. Regardless, there is not an inequality that needs to be addressed. (Yes, gays have in the past not been totally free to pursue a gay lifestyle. But that is not the same as being denied the right to marriage.)

12. If introduced, same-sex marriage will instantly cause a shift in language. There won’t be simply ‘husband’ and ‘wife’ any more. We will have to speak of one’s ‘gay husband’ or one’s ‘female wife’; of ‘gay marriage’ and of ‘real marriage’. People like to be clear when they speak, and because same-sex marriage really is not the equal of real marriage, these new terms, or ones like them, will be inevitable.

13. If the Left really wanted equality, why not push to abolish marriage altogether? Let the state recognise no marriage at all, only cohabitation arrangements. Surely no-one at all being married would be real equality? 0=0, after all. It would be a bit like abolishing the aristocracy, instead of expanding it by admitting different people to it. Abolishing marriage might even be easier to pull off. Many opposite-sex couples live together and have kids without getting married, or cohabit for many years before having a wedding ceremony. The terms ‘husband’ and ‘wife’ are already used less, in favour of ‘partner’. Why not just push that social current the whole way along, abolish marriage once and for all, and get equality that way? Of course, you wouldn’t do that if equality wasn’t your goal, and something else was.

14. Why is the Left not pushing to change the definition of marriage to include polyamorous relationships as well as well as same-sex couples? Why does their ideal version of marriage only consist of two people? Is, in their view, a polyamorous relationship not equal to a two-person relationship? If so, why? What’s so special about the number 2? (Of course, for a man and a woman, 2 is a very special number, as that is what is necessary to have a child. The number 2 reflects the fact that there are two sexes, which are polar and complementary. But what is the particular significance of the number 2 to a same-sex relationship?)

Well, it’s time to call them out on that. Same-sex marriage is not about equality, it’s about changing the definition of marriage. Why they want to do that is a topic for another essay. But briefly, as far as I can see, the aim is to diminish the importance of family, family ties, sex roles in parenting, and the influence of the Church in our society.