Gerry Wood is wrong. He’s indigenous, which means he’s better than us, and a black man being wrong is obviously not as bad as a white man being wrong. But still! I read with disgust his column in spring 2017 edition of The Record, which is a free magazine distributed by the Catholic orgainization, the St. Vincent de Paul Society. AKA Vinnies. Yep, I can’t even buy vintage clothes and bric-a-brac without being bombarded by hate speech. (I thought it was a magazine about vinyl records! Boy was I wrong!)

Mr. Wood is the CEO of an organization called SNAICC — the National Voice for Our Children. There is more information at this website: http://www.familymatters.org.au/. SNAICC wants to let black kids be raised by their real parents instead of being put in out-of-home care. Black kids are 10 times more likely to be removed from their homes than non-black kids. All good so far. “White people are bad.” Yep, we are on-message. 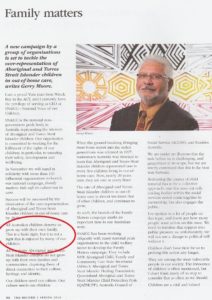 But then he comes up with this astonishing statement, which made me want to vomit all over my new second-hand iMac.

“All Australian children deserve to grow up with their own family. This is a basic right.”

Yep, you read that right. A black man in a position of authority is being allowed to spew homophobic hate speech in a Catholic magazine in 2017.

No, Mr. Wood, ‘all’ Australian children do not deserve to grow up with their own family! ‘All’? No! That is a vile homophobic slur! Why? Well, what about gay couples, so close and yet still so far from their long-held dream of being able to say that they are ‘legally’ married? Do you expect all those ‘legal’ marriages to be childless? Well? How are they supposed to be ‘equal’ with normal marriages if they don’t have children? Answer: They can’t! It’s simple mathematics! ‘Married’ gay couples must have children in order to have full equality!

But where do you expect those gay couples will get their children from?

Well let me ‘join the dots’ for you, Mr. Wood. Or should I say, Mr. Homophobe! Until human cloning is perfected, gay couples have to hire a surrogate mother in order to ‘have their own children’! Lesbian couples will have to hit up the sperm bank and grab the turkey baster, or put on some lipstick, grab the Jim Beam and ‘go straight’ for a night! (I’m allowed to say that. I have lots of lesbian friends). If they don’t do that, then a gay or lesbian couple can adopt a child. But in none of these cases will their child ‘grow up with its own family’. In none of these cases will the child be raised by both its own parents!

So what does all this mean? Well let me break it down for you, Mr. Wood. If you think ‘all’ Australian children have a basic right to grow up with their own family, as you stated, then you oppose gay marriage. And that makes you a homophobe. In 2017, that is the third-worst thing you can be in this country (after islamophobe and racist). You might be a ‘proud Yuin man’, but I wouldn’t be proud of that!

I don’t know how you got to be the CEO of anything, uttering boneheaded homophobic statements like the one above. Good thing I’m here to fix it for you! It’s not ‘all Australian children’. It’s ‘all aboriginal children’.

Gay couples ought to have a ‘basic right’ to deny a white child of its natural mother or father while growing up. That means that white children do not have a right to grow up wth their own family. Everyone knows this. We’ve been though this like a bazillion times! Asian or half-Asian kids (because let’s face it, many of the surrogate mothers that gay guys hire will be from poor countries in south-east Asia) also do not have a right to grow up in their own family, because the white part is more important than the Asian part.

In contrast, all black kids have an inalienable right to grow up with their own family, no matter how ‘dysfunctional’, ‘uncaring’, ‘violent’, ‘drunk’ or ‘absent’ their parents are. That is because the black race and the white race are not the same. Black people are better. Their culture is better, their lifestyle is better, their religion is better. They have a Dreaming, which whites and others lack! 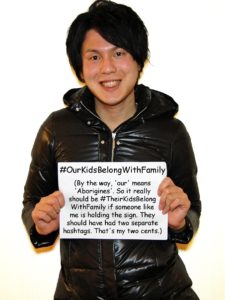 White kids and half-Asian half-white kids do not have the same rights to grow up in their own family. Because if you think they do have those rights, then you’re a homophobe, and homophobia is the third-worst thing there is. White kids should be raised by gays and lesbians, or government preschools, or whatever. Doesn’t really matter because they have no rights.

Yes, the races are equal, but on the other hand, aborigines are better than whites and Asians and have different rights. Pretty simple, right? Even a child could understand that.

To conclude, allow me re-write your original, appalling statement correctly. No trigger warning needed this time:

Or maybe you really are a homophobe, Mr Wood…