On the back of the SEN trio of Tim Watson, Garry Lyon, and Kevin Bartlett questioning both Bennell’s extended absence from the game and the decision to draft the former Gold Coast Sun in the first place, the veteran coach of 240 AFL games came out swinging, as reported by the Herald Sun’s Mark Robinson:

“When it’s a white kid, it’s a calf; when it’s a black kid with a chequered history, it’s a drug problem. That’s what was alluded to.”

It didn’t end there, either, with Lyon also quizzed on whether he thought the football world was racist.

“Is it the football world?”

“AFL football has been a great champion and a great vehicle for indigenous players. Perth is mostly Noongar, and Noongar players express themselves and develop and get opportunity.

“But there [are] ongoing challenges. We’ve all seen that, and I think indigenous players themselves are quite vocal about that.

“The country itself has ongoing challenges with how we celebrate Australia and recognising our indigenous population and where it sits in history.

Well, Ross, you mightn’t have been political before, but you sure as hell don’t get to claim that once you start bandying unfounded accusations of racism about. With that in mind, prepare for us – the supposedly racist Australian football faithful who have been privately asking the same questions – to be political right back.

We’re not entirely sure what’s brought on your latest bizarre outburst. Maybe you’re trying to attach yourself to the current flavour-of-the-month activist cause to show your virtuous side and make everyone forget the fact you can be a bit of a prick at times:

More than likely you’re trying to deflect attention from yet another questionable recruiting decision after the absolute stinkers that were Jack Anthony and Colin Sylvia.

Whatever the case, your slanderous accusations aren’t going to stick. You see, Ross, there’s that slight issue of the chequered history, which you yourself alluded to (the Guardian may have done its darndest to selectively edit that inconvenient detail out of your comments, but the good ol’ Herald Sun has made sure to provide the full context).

The media outlets covering this story seem to be tiptoeing around the issue, but the fact is Bennell was traded from the Suns at the end of 2015 after disciplinary issues involving drug use and a drunken altercation.

That shouldn’t hang over his head forever, of course, but considering he hasn’t been sighted since and is now expected to miss the early stages of the 2017 season, it’s only natural that rumours should start to emerge of something a little more sinister than a calf injury.

So tell us, Ross: do you really believe your hypothetical “white kid” in a similar position would avoid the same kind of scrutiny if he had a past like Bennell’s? More to the point, do you honestly think any Indigenous player without that kind of baggage – say, someone like Daniel Wells, who managed just twelve games across his 2014 and 2015 seasons with North Melbourne due to recurring foot, calf, and Achilles injuries – would be subject to the same sort of rumours and innuendo?

Yeah, we didn’t think so either. But that’s okay, Ross. You’ve obviously got a lot of faith in young Harley, and we’re all hoping he rewards that faith by lighting up the Subiaco turf later in the year and putting any unsavoury suggestions to bed.

But should that fail to eventuate, Ross, you’d better be prepared for another grilling on the subject. Going by the initial reaction, the AFL world isn’t buying your faux sanctimony and won’t be backing down from the tough questions. 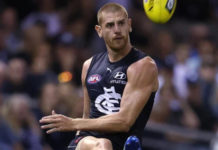