I had been planning to write an article about the sorry state of Victorian road rules, and those across Australia for that matter, for a little while now. I was going to wait until the next annual report came out to see exactly what the financial damage was to the Australia public. However, recent events in the Melbourne CBD, where a drug crazed, psychotic mental case drove his car into groups of pedestrians, and a Facebook post to a group called “Aussie speeding fines” from one of the victim’s families, prompted me to bring it forward and write it now instead.

In his Facebook post, the man describes his disgust at the fact that this man was let out on bail, despite a history of mental illness and violent abuse. He laments that the media are not holding bail justices to account for letting him out. This is certainly not the first time an individual has been released into the public only to attack and kill someone. There are clearly major issues of weakness within our criminal justice system that allow an individual like this to be released into the public. Why any individual with a history of mental illness and violence was not being held in custody is beyond me. I can tell everyone, from personal experience, that people with mental illness and a history of violence are unpredictable if anything. There is no way anyone could have known this man wasn’t a danger, and it should have been assumed that he was, given his history.

This man should not have been set free on bail, not ever. A man with a violent history and a history of mental illness should be kept under guard or at least monitored at all times.

It is a discussion that must be had around the country, and since the incident, Dan Andrews has at least announced that he will look to reform bail laws. This particular article is going to focus on another part of the family member’s comment. That being, with regards to speeding fines and the draconian enforcement of almost pedestrian speed limits, for little benefit to safety:

“Let’s not forget that the deaths that occurred yesterday will be noted as “road deaths” and reflected in the road toll, which has increased consistently in Victoria for the last 4 years. More fines are issued each and every year and now we have average, everyday motorists being put in jail for failing to pay those fines, for very minor breaches of the road rules – in many cases, being just 4 or 5 km/h over some arbitrarily set and artificially reduced limit, that cause no-one else any harm or injury – yet this man, with his long history of violence, was allowed to run rampant on our streets.”

Exactly right, sir, exactly right! Very well said. Why, in the name of all things good and moral, was this man allowed to walk the streets, yet people are sent massive fines, even jailed, for being a few KMs over the limit? How is this justice? How are our politicians allowed to get away with such a blatant abuse of power? 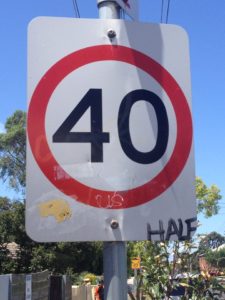 As I’m sure everyone knows (as it has been reported before), 40 KMH zones are a major cash cow for the state coffers. Given the amount of money they generate every year, it is not surprising that the government continues to support them. This support always comes with the same, boring, platitudes about “safety” and the road toll. It’s just another version of, “Why won’t someone pleeeeease think of the children!” Meanwhile, half of all road deaths occur on rural roads, despite 89% of people in Australia living in urban areas where these ridiculous speed limits are found.

40 KMH zones are almost purely about control and revenue-raising. It is no coincidence that they often come out of nowhere and seemingly with no apparent rule to decide what constitutes a 40 zone in the first place, other than school zones (which may be justified around primary schools, but are completely pointless and insulting to teenagers when placed around high schools). When I was growing up you could look at a road and get a pretty good idea of what the speed limit was, simply by its size, shape and location. The rules were fairly simple: back-streets were 60 and large multi-lane roads were 80 (sometimes 70). Driving past shops it was usually 60 and freeways in the city were 100. Plain, simple, easy to understand, easy to follow. The situation is vastly different now.

You could have two identical streets, both exactly the same size, with the same traffic, tram lines, no tram lines, it doesn’t matter, the speed limit on one is 40/kmh, the other is 60/kmh. You could then travel one suburb over and you find a third identical street where the limit is 50/kmh. There are places where the main road is 40/kmh and a side street is 50/kmh – it parodies itself. Now with the advent of speed limits based on time of the day, not to mention school zones, speed limits change from minute to minute, and unless you are familiar with the road, you might have no idea at all. There are roads that go from 80, to 70, to 40, to 70, to whatever the speed limit is at that particular time of day (just make sure you read the sign carefully) all within a few kilometres.

Matters are made worse by the fact that speed limit signs are placed infrequently and in places that are sometimes not obvious or clearly visible. If you turn out of a side street onto a larger road you may not see a speed limit sign until after the next traffic lights (which could still be a decent drive away). In that time a hidden speed camera could easily nab you for being 10 KMs over the limit because you were driving 50 in a 40 zone. That’s a $310 fine and three demerit points right there. Too bad, so sad, you should have known better.

Last year it was reported that despite revenues for speeding fines dropping, the death toll actually rose in NSW! Correlation does not equal causation, but no correlation equals no causation. Clearly there is more to road safety than simply forcing people to drive slower than they otherwise would of their own volition. Don’t tell this to our supposed “leaders,” though, because they just won’t listen to you.

Given the recent events, it is clear that our governments care more about milking hard-working ordinary Australians of their money than they do about actually doing their job – that being, serving their constituents. They obviously care more about keeping their jobs and using taxpayer money to bribe voters (note: voters are often not taxpayers, yet they get a say in how our taxpayer money is spent) than they do about actually doing what is genuinely best for everyone. Their interests are clearly not aligned with those of ordinary Australians.

The question needs to be asked: why are state oppositions not running a campaign against draconian road laws? The Victorian Liberals are way behind in the polls, this would be a great way to win people back to their side, yet they don’t seem to want to consider it; why is that? I can think of only one answer: the Coalition are just as addicted to spending taxpayer money and milking us of our money as the ALP. They are two sides of the same, bought and paid for, coin. Neither party represents the will of the people.

Enough is enough; we demand our freedom back. Give us back our roads – they don’t belong to politicians, they belong to the people of Australia.