There is no escaping it, no avoiding it, no running away from it. The moment Donald Trump does something remotely against their ideals, the Left are going to run around crying and screaming blue murder. It was obvious to anyone who has been paying attention for the last year, or so, that this would be the case, but now we have full confirmation. 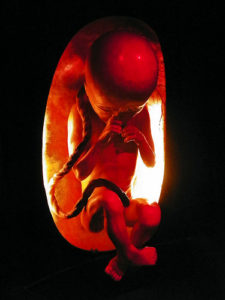 The latest example came when Donald Trump signed an executive order preventing taxpayer-funded NGOs around the world from giving abortions, including giving advice on them.

Headlines were filled with comical hysteria:

“Trump’s war on women is his most devastating act so far” – The Age.

“This photo sums up Trump’s assault on women’s rights” – The Guardian (referring to the fact that it’s men in the picture).

The list… goes… on; it’s been a wonder to witness. You’d think he’d started a world war rather than simply cut government funding to one foreign aid department. This is “autistic screeching” of the highest order. People have called it an “anti-abortion” move, whilst screamed that he’s going to “hurt women” around the world. But what did this order actually do other than stop taxpayers funding abortions? Abortions are still available; it’s just that the US taxpayer isn’t going to fund them. Women are still more than able to seek advice on what to do.

One over-the-top headline claims that Trump’s order will cause more abortions – an utterly ridiculous claim that goes against basic common sense, not to mention economic reality. When you fund something, you tend to get more of it, that’s how economic incentives work. Besides, the only thing that “causes” abortions is a prospective parent saying, “I want an abortion,” because they had unprotected sex and got pregnant then decided they didn’t want the child (rape notwithstanding – but the orders don’t prevent discussions about abortion in the event of rape, incest, or life-threatening complications, proving how idiotic this meltdown is). Are these fools really claiming that not using taxpayer funds is going to, somehow, lead to more sex? Hah!

With this action, the Left saw a chance to paint Trump as “against women”, thus furthering their own agenda. Were they ever going to let that opportunity pass? The problem with this strategy, for the thousandth time, is it does not work. It’s the same strategy they’ve been using since Trump was nominated by the Republican party, and it failed miserably. You can’t just label him a “misogynist” and have the label stick; the guy is Teflon. It especially doesn’t work when it is so obviously wrong.

It’s not “anti-abortion” or “misogyny” to stop taxpayer funding of abortion in other countries. All it is, is stopping taxpayer funding of abortions in other countries (duh). That’s it; nothing more than stopping the use of taxpayer funds in one area. How is this a “war on women”? Why should US taxpayers be expected to fund the abortions of anyone, let alone women who aren’t even living in their country? It makes no sense if you take it on face value. God forbid women around the world show a little bit of personal responsibility and not have unprotected sex when they are unable to care for a child. Why should taxpayers in the US be on the hook for poor personal decisions in other countries?

I suspect the real issue here is that Trump has cut spending in an area that the Left viewed as sacrosanct. If he can cut funding to this, he can cut funding to anything. How can they stay on the taxpayer-funded gravy train if there is no taxpayer-funded gravy train? This meltdown ultimately proves that cutting government spending, in any area, is going to be met with howls of protest, especially from the people who benefit from the funding the most. The political Left are ever campaigning for bigger and more powerful government. Cutting funding in this area sends the message that Trump may actually deliver on his promise to cut the government down to size and “drain the swamp”, so to speak. This has them scared stiff, hence the lashing out and “think of the women” rhetoric (notice how in a discussion of abortion nobody seems to mention men? I guess we have no reproductive rights when it comes to our children).

Given that Trump is now almost certainly going to reduce funding to the UN dramatically, I would imagine the Left’s fear of sliding into irrelevance is growing by the day. It’s fantastic to watch – they have ruled the roost for too long, and the UN has become a monstrosity of an organisation that is now essentially working against the interests of ordinary people the world over. The fact that countries like Venezuela, Cuba and Saudi Arabia are on the human rights council (Saudi Arabia, for goodness’ sake: a country that literally executes people for being gay) is an insult to everyone on the planet.

The ultimate irony of Trump’s order on abortion is that now The Netherlands are considering taking over the funding themselves. So not only are US taxpayers no longer on the hook, but the services will likely remain available around the world anyway. Yet another massive win for Donald Trump and the United States.

Photo by Peter O’Connor aka anemoneprojectors