A piece in The Age, everyone’s favourite non-taxpayer-funded regressive Left news outlet, caught my eye. It reports on sales of a book that hasn’t been around for a while. A book written by a guy that was not a very good guy.

The ABC was all over it as well. 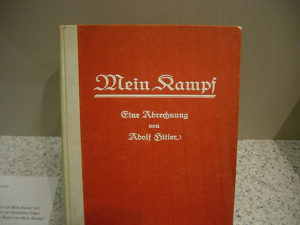 That book was Mein Kampf and that guy was Hitler. In it, he outlines the basis of his own ideology, the ideology that inspired the National Socialist German Workers Party, the Nazi Party, that he would soon lead. I’m sure we will get a wave of commenters from the Left deriding this surge in book sales as an obvious sign of the rise of the dreaded “far-right” and proof that racism is on the rise, with the caveat being, that anyone who disagrees with them is racist, of course.

Only, the thing is, if you look at the BBC article about the same topic, it notes:

At the end of January the IfZ will launch a sixth print run. The book contains critical notes by scholars.
…
Mein Kampf (My Struggle) is an expensive academic text, and is being bought by libraries, schools and history academics.”

So why did The Age and The ABC fail to mention this bit? What would their motives be? To continue the “rising populist racism” narrative the Left have been running around the world, maybe? Maybe they just forgot? Who knows.

I don’t disagree; the surge in sales of this book are potentially evidence that racism is on the rise in Germany. But is it any wonder? Look at what the current government is doing there. They are letting in wave upon wave of migrants from incompatible cultures, directly resulting in an increase in rape, violence and jihadist attacks.

Can you really blame people for seeking answers in places that aren’t so palatable? Can you really blame people for not wanting to just lie down and take this horrible assault on their culture and heritage? Hitler was a lot of things – a murderer, a warmonger, likely a drug-addicted psychopath – but he was, above all, a nationalistic patriot. He loved Germany; his policies were about Germany and Germans only.

No, I don’t agree with what he did as leader of Germany. Aside from being a mass-murder and warmonger, Hitler was a socialist (making him a leftist, not “far-right,” whatever the hell that actually means) and I am of the genuine belief that socialism is an evil in and of itself. If you are a socialist, your core beliefs are that extortion and theft through force are morally justified. I am simply highlighting the facts as they are, Hitler loved his country, he loved his people and, what goes unreported in the media, his people loved him.

Hitler was loved by many people in his own country and was even admired by future U.S. president John F. Kennedy, a small fact that also tends to go unreported in the mainstream media.

The fact that critics of Merkel’s disastrous migrant policies have had boring and predictable cries of “racist” thrown at them makes it even less surprising that people are turning to an actual racist. After all, if they are going to call anyone who disagrees a racist, why not simply be a racist? Group polarisation is stronger than ever in our day and age.

This is what happens when you belittle people’s views and call them “racists” when they are not. Some of them will actually become racists. They will end up being exactly what you accuse them of. Is this really so hard for these contemptible fools to understand?

Aside from being a wondrous year for freedom and liberty, 2016 really highlighted something that I have known for years now, that the Left will never admit they were wrong. They will never ever listen to any idea they disagree with and consider it on its merits, never ever ever ever. When confronted with undeniable facts that show them to be wrong, they will double down on their views.

Did the collapse of the USSR change their minds and make them see the light and reality of Marxist failings? Did the recent collapse of Venezuela change their mind? No, they most certainly didn’t. The fact that many of these same Leftists that praised Venezuela now seem unable to even talk about it, whilst still pushing the same views, tells us everything we need to know.

So get ready, for any increase in patriotism amongst ordinary citizens will undoubtedly be “proof” of the rise of evil “far-right racism” and of the Left’s own virtue and the evil sin of those they oppose. It will not be proof of their own failings; it will be proof that they are right. It will mean they clearly have a “lot of work to do to stop racism” or something along those lines. Ultimately it will mean a suppression of free speech.

The reaction is coming – Brexit and Trump are just a taste – and the Regressive Leftist establishment are not going to like it. Already people are starting to take matters into their own hands; how long until they completely lose faith in the authorities to protect them? When that happens the result will be ugly. Nobody wants this, and until the world’s leaders accept the legitimate concerns of their citizens on immigration, Islamic immigration in particular, then things are just going to keep heating up until they reach a boiling point. Then it will be too late to stop.

Then again, maybe The Age and The ABC could just tell us the truth? That most of the sales were actually just academics and historians looking for an insight into the mind of history’s most famous mass-murderer. But that would be asking too much it seems. Fake news indeed…