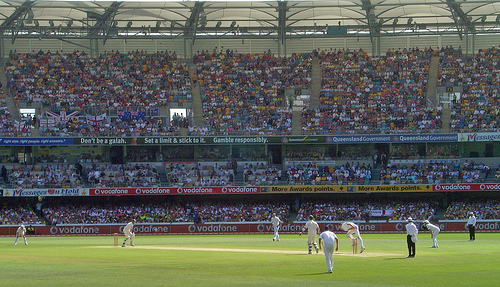 Here at XYZ, some people might accuse us of having a fixation on Waleed Aly.

But can you blame us when he’s so entertaining?

And if we do mention the future Australian of the Year a touch too often, at least we are in good company.

Waleed seems to be everywhere.

No sooner was he back from his tearful and ever so slightly histrionic coverage of the glorious election of Donald Trump, than he popped up on the ABC to lecture the Australian Cricket team on their recent poor Test performances.

While the musings of the various sports journalists, former players, coaches and other sports-related experts that appear on the national broadcaster’s Sunday sport show usually pass without much comment, Waleed’s opinion was breathlessly reported on by the wider press, from News Corp to Fairfax to the Daily Mail.

Why the views of a decidedly unathletic Monash University lecturer on the state of Australian Cricket were considered newsworthy is puzzling. But perhaps that’s my ignorance showing.

After all, Waleed’s opinion seems one of the most sought-after in Australia.

His social and political commentary appears regularly in newspapers such as The Guardian, The Australian, The Australian Financial Review, The Sydney Morning Herald and The Age. He has been gifted numerous shows, appearances and interviews on the ABC and SBS, on issues ranging from law to geo-politics to ethics, philosophy and religion.

He has been awarded a Walkley, a Gold Logie, and a United Nations Association of Australia Media Peace Award for Promotion of Climate Change Issues.

He even made the cover of Men’s Style magazine.

He was invited by our beneficent Prime Minister to dine at his table and give his opinion on the state of the nation’s affairs in front of the cameras of the nation’s media.

His fame has spread overseas as well. Waleed was given the privilege of having his manhood insulted by the semi-legendary right wing hipster-king Gavin McInnes, one of the founders of Vice Magazine.

He has been made the host of Channel Ten’s prime-time light entertainment news show The Project, from which he offers a wide range of opinions, from explaining why the latest Terrorist attack is the fault of the victims to explaining why anyone who raises questions about Global Warming is a kook.

He’s ever so good at explaining.

Just the other night he was explaining to Australian entrepreneur, philanthropist, aviation enthusiast and harmless eccentric Dick Smith how the intricacies of the welfare state required unlimited, non-discriminatory immigration forever.

I’m not much of a fan of Dick, but it’s fair to say he took Waleed to town.

“Mr Smith shot back at the host with venom, telling Mr Aly he didn’t have a “basic understanding of economics”.

“Yeah, that’s absolute rubbish. You don’t understand basic economics, and all I can say is it’s going to get worse and worse,” he said.”

It really struck me watching the video of this interview that being the pet token Muslim of the left has taken Waleed way out of his comfort zone.

The man trained as a lawyer, for crying out loud, and now, simply because he’s a nice, non-threatening front man for the faith currently at the centre of the conflicts ripping apart the globe, his opinions on everything from immigration to economics, from ethics to civics, from global politics to the composition of the Test team are being taken seriously.

While he doesn’t seem a stupid man, Waleed is clearly a basic b*tch academic, of the type that infests our taxpayer subsidised University campuses in their thousands across the nation.

His opinions are a cookie-cutter set that can easily be found around any dinner table of humanities graduates in any city in Australia, with no more insight or introspection than any other member of the establishment.

I could name half a dozen intelligent, tertiary-educated leftists in my own life, and even some in my own family, who would unthinkingly parrot his opinions without needing to hear them, in some cases down to the sentence.

His career, his public profile, his glamorous life of awards, prizes and television shows only exists because your average middle-class leftist is terrified at the very thought that any worldview exists beyond their own.

As the responses to the recent election of Trump and the vote for Brexit show, any bursting of the bubble that the human race is on an inevitable conveyor belt towards a world where everyone agrees lockstep with every aspect of their personal philosophy, can send your average leftist into an emotional spiral of hatred, rage and despair.

We mention Waleed Aly so often here at XYZ not just because he frequently does hilarious things, but because the establishment continues to thrust him up into the air like a scarecrow in order to keep the bad thoughts away.

He is their voodoo doll. If they can only give him enough prizes, enough prestige, enough public acclaim, then magically all those of his faith will become like him.

If only the scary people screaming on the television can be made into a legion of smiling, cricket-loving, guitar-playing Waleeds, everything can be made all right.

Then September 11 will never have happened, we can go back to arguing about corporations and how bad they are, we can return to the fun anti-globalisation rioting the left seemed to be doing all over the Western world in the late nineties.

That’s why they love him; he’s the warm blanket they can pull over their heads to make everything alright.