I am currently working on my next book, which is a complete departure from my first two works. The theme is how to succeed as a man in a feminized world. Crucial to this success is forming a coherent and realistic understanding of women. If you don’t get this right, then everything else that you achieve and work for will be in jeopardy.

In this week’s edition of the Australian Spectator, conservative opinion columnist and talk show host Andrew Bolt has an article of random thought bubbles which he calls his Christmas diary. I read it with a wry grin, as it encapsulates the theme of my next book so perfectly. Bolt writes on the gift that Trump’s election has been this year:

“Donald Trump to keep the Clinton mafia out of the White House? Oh, wonderful. But if I were permitted one more gift it would be for Trump to not now do an Arnold Schwarzenegger and tout for the Left’s approval.” 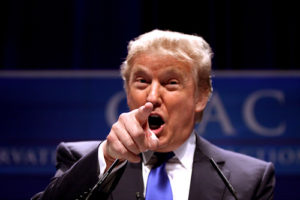 It’s nice for Bolt to write this, but the truth is that he was late to the Trump party. How late? Here are all of Bolt’s articles on Trump that I could find on his blog. Two days before the election he was still believing the pollsters’ claims that Trump was doomed. But more interesting are his pieces in October when the footage emerged of Trump engaging in some bawdy locker-room talk. Bolt’s reaction?

“The question now isn’t whether Donald Trump is just a moron or an outright menace who could blow up the world.

“The question is why a braggart, buffoon, liar, narcissist and sexist with almost no political principles came so close to becoming president of the world’s greatest power.
Bolt wrote that less than a month out of the election and yet here he is now thanking baby Jesus for the wonderful gift that was Trump.”

On most other social commentary Bolt is usually right on target. He understands the dangers of reconciliation, identity politics, multiculturalism, you name it. But when it comes to strong men saying mean things about women, Bolt instantly becomes as sanctimonious as the Leftie virtue-signallers that he regularly skewers. Why did Bolt get Trump so wrong? What blinded him to the biggest conservative story of the year? The answer to that can be found in Bolt’s same Spectator article:

“I still haven’t cashed in my birthday present from my wife – a licence to spend up to $5,000 on a painting, openly and without shame. This is to spare me the usual humiliation of squirrelling away cash for my secret purchases, necessarily cheap and often thus not great, so that they don’t turn up on the credit card statements …

“It is a fine painting of a place that means something to me. And miracle! My wife paid the bill without even the gentlest remark that I cheated on her price limit. All yesterday I had a happy.”

Isn’t that nice? All yesterday Bolt had a happy because his wife gave him permission to do so. Bolt lives a self-confessed life of humiliation where he needs to hoard cash for cheap purchases so his wife won’t find out and put him in the naughty corner.

Bolt is a situational alpha male. While very successful in his career and public life, he is the epitome of the hen-pecked husband, and the depressing thing is that he completely lacks any self-awareness on the matter (if forced to defend this quote, I have no doubt that he will claim that it was just an attempt at self-deprecating humour). His beta-male relationship game makes his initial position on Trump perfectly understandable. He had to publicly disapprove of the “disrespectful male” for the sole reason that he was virtue-signalling to his wife.

This ignorance of the male/female dynamic caused Bolt to miss the biggest story of the year, a story which he more than any other political commentator in Australia was best positioned to grasp. Bolt could have raised his standing to a stratospheric level but instead he has proved himself as clueless as his fellow journalists whom he routinely mocks for getting things wrong.

Bolt will continue to get things wrong if they collide in any way with his preconceived ideas about women. And what of his wife, sitting at home reading her husband’s awful beta-male posturing that is right there in print? I, for one, won’t be holding my breath to see how long she’ll be satisfied with her husband’s outward status level. Bolt better hope for his sake that I get my book out very quickly indeed.

This article was originally published on 12/12/2016 at https://pushingrubberdownhill.com/ where Adam Piggott blogs regularly and brilliantly.