Sources such as the Guardian are reporting that the Left are refusing to accept Donald Trump’s victory. Ironically, these are the same people who were outraged when Trump said that he’d wait to see what the result looked like before he conceded defeat in the 2016 election.

These are the same Democrat voters who ridiculed Trump after the statement he made during the third presidential debate. These same voters are now taking to the streets to protest the legitimacy of his election victory. If everyone didn’t already know that the left appear to be hypocrites, this screams it loud and clear.

What seems unclear is why, in a democratic country, the Democrats somehow think if the person they don’t like wins, then the election wasn’t fair. Some may say that Trump was guilty of the same thing, but there is huge evidence that the media was stacked against him. 96% of donations by journalists went to the Clinton campaign. And with the Podesta emails being regularly leaked, the corruption became quite clear. Trump’s claims that the media was stacked against him seem entirely plausible.

What is difficult to understand is why the Democrats think there’s one rule for them and another for the Republicans. Why is it unacceptable for a Republican to contest an election but it’s perfectly acceptable for a Democrat to participate in violent demonstrations if their side loses?

After the 2000 election, Al Gore used every court available to him to contest the state of Florida (the make or break state which came down to between 500 to 800 individual votes). These were perfectly legal proceedings and they were ultimately dismissed by the US Supreme Court. While these proceedings took place, the country engaged in civil debate until the eventual outcome was decided. 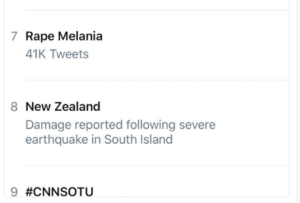 What is vastly different is that this time around, the election was won fairly and decisively with an honourable concession of defeat delivered by Hillary Clinton, but numerous Democrats have refused to accept the outcome. There have been constant protests and a trove of Twitter feeds and Facebook petitions venting at the result of the 2016 American election. Since then, there have been constant protests, the most recent and also shocking Twitter trend was the #rapeMelaina which was reported by Breitbart news. Why isn’t Barack Obama publicly condemning these actions? Do they understand that liking a Facebook page and retweeting a statement made on Twitter is not the same as voting? What do these people think they are achieving? A Facebook page with millions of likes will not change the result of a fairly held, democratic election. Trolling social media is not the same as placing a vote.

The Twitter #rapeMelania has introduced a new level of barbarism into America’s political arena.