Well, I was wrong. I’ll admit it. It looks like Pauline’s appearance on Q&A was just a bad case of ring rust. She’s back, swinging, and more prepared than ever. Her 2016 maiden speech was a stroke of brilliance. Unapologetic like Trump, but full of indisputable facts and figures (occasionally the Donald’s Achilles heel) that were so indisputable in fact that they triggered a walkout by easily triggered Greens as they finally realised they were bankrupt in a free market of ideas, particularly in regard to Islamisation. It was a very cheeky Milo moment for Pauline, and she revelled in it. 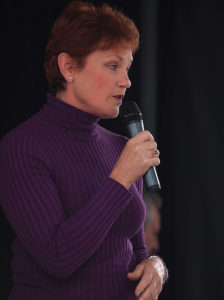 Hanson never spoke like a sound-byte-spewing politician, and recognises now more than ever that it is a strength rather than a weakness. Her maiden speech could best be described as a reasonable call to arms. A manifesto of common sense (which is why it made heads explode in denial rather than the ridicule she usually inspires from critics) and genuine equality. The left and the Murdoch media has and will try to frame it as either xenophobia, or silliness from a Senator out of her depth, depending on their degree of pathological Cultural Marxism, or equally deplorable Cuckservatism. Don’t listen to them. Watch the maiden speech and decide for yourself.

SMH journalist Latika Bourke’s articles make it evident that she clearly buys into all the conspiratorial nonsense about the patriarchy, wage gap, and systemic racism, despite the fact that she is a woman of Indian ancestry. Keep in mind that this is a migrant group that statistically have become more prosperous through good old-fashioned hard work than just about any other ethnicity (including Caucasians) in Western nations.

So successful, indeed, that they’ve ostensibly found themselves honorary members of the white patriarchy, despite being of a darker caste than many of those from other, less prosperous ethnicities who are more inclined to become bogged down in crippling identity politics and perpetual victimhood. Latika Bourke is doing far better for herself than some blue collar member of the white patriarchy trying to make ends meet by digging holes in a hi-vis sloppy joe.

The columnist wrote a predictably waffling virtue-signalling piece on the maiden speech that was shallow on statistics, but overflowing with paranoid champagne socialist platitudes. Latika claims that Pauline didn’t provide any evidence to back up her claims, yet never attempts to counter them with any statistics of her own. Funny that. The entire piece seems to navel-gaze about how many times Hanson says the word ‘Muslim’, while seemingly not correlating that factoid with the causative effect that concerns about Islamisation was the crux of her maiden speech.

I’m sure Andrew Bolt could come up with a similar ‘whopping’ statistic if he were to collate how many climate alarmist buzzwords the Greens senators uttered in their maiden speeches, or how many times Obama is going to parrot the phrase ‘wrong side of history’. About all that could be gleaned from the piece was that Latika Bourke is apparently more morally superior than Hanson and the rest of the basket of deplorables.

But I digress. More often than not nowadays, I find myself quickly skimming to the comments section to get to the heart of any story. Particularly one in which regressive leftists try to analyse and invariably discredit the fears and issues that concern ordinary Australians living in faraway low-socioeconomic areas that they are far less likely to ever visit than say, Havana, Cuba or a hiking destination in Nepal…

Usually, ordinary people who can string a few words together (despite popular mainstream media opinion) who aren’t beholden to toeing an editorial line, and have first-hand experience in what they’re talking about, offer more informative fact-based commentary than mainstream media, whose observations are incredibly naive and often indistinguishable from Pravda.

In this particular case, you needn’t bother reading Latika Bourke’s piece (which amounts to basically informing us about how wise and tolerant she is for mindlessly buying into groupthink). A self-aggrandising love-in that celebrates the superior virtue of Fairfax journalists, completely dismissing the support Hanson enjoys in a face-palming echo of dismissive coverage of the Trump phenomenon by U.S. Media, that had a flat earth quality right up until recent weeks.

Instead, I direct you to a comment below the Latika Bourke’s article by someone who calls himself ‘Gatsby’:

“Myself and millions of Australians agree with her comments on this issue 100%.

“Imagine you wanted to call out Christianity for it’s treatment of women, but you were told that you’re forbidden because it might radicalize Christians to commit mass murder of innocent men women and children.

“Labor-Greens and their Leftist allies in the media say they care about gay rights and equality for women and domestic violence but will sell you out in two seconds as soon as they think someone else is more marginalized than you – and then they turn on you. Zero principles. There is nothing Leftists won’t make excuses for.

“Most telling of all, is that we barely ever get to talk about the important issues regarding Islam in newspapers. If she’s wrong then use facts and logic to make those who agree with her look foolish.

“Instead we don’t get facts and reason. All we see from the Left is baseless smears attacking the person (not the issue) by calling them racist in an effort to intimidate them into silence, rather than explain why they’re wrong. An utter disgrace. I laugh at people who don’t know the difference between a racist and someone who is opposed to an appalling set of ideas.

“Most of Europe and America has now woken up. Finally Australia is starting to get the courage to take on those who would intimidate you into silence with personal attacks and baseless smears.”

In this particular case, as with so many other online mainstream media articles, the comment has picked up the ball so clumsily dropped by the reporter. Comments used to be regarded as online condiments to compliment articles and opinion pieces. But as mainstream media continues to jettison all pretence of fairness and balance, the humble comments section seems to be evolving from the mustard or tomato sauce into the meat and potatoes of the story.