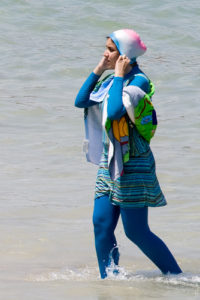 Yes, all right, you Islam apologists of the Left. We’ll give you this one: the burkini ban was an utterly ridiculous idea – perhaps even more ridiculous than the idea of the burkini itself. That the leaders of France should seek to uphold the very French notion of liberty by so blatantly violating it demonstrates a truly stunning failure of logic.

But can you do everyone a favour and stop labelling these sorts of hare-brained authoritarian interventions as products of the “far right”? Those of us who are truly on the Right and proudly identify as such are getting a little sick of you constantly trying to pin fascism on us, and we think it’s high time you stopped.

But these subjective views are not what place us on the right of the political spectrum. Rather, we take our position there by virtue of our objective and principled approach to individual rights. So while we may condemn Islam and everything it stands for, we also acknowledge the right of any citizen – so long as they do not directly act upon the rights-violating tenets of Islam – to publicly display themselves as followers of the faith in any way they see fit, however unpalatable that may be to those of us who know what that faith truly represents.

So by all means, you apologists of the Left, celebrate your victory, both moral and legal, over the use of authoritarian means to banish Islam from the beaches of France. But know that yours is not a victory over us. For the Right is for rights, and those leaders who would seek to violate those rights through the imposition of such draconian laws have surrendered any legitimate claim they may have once had to representing us.

And keep in mind that, in advocating for the infringement of rights in the collective interest of a perceived greater good, such leaders share more in common with the Left than you may care to believe.