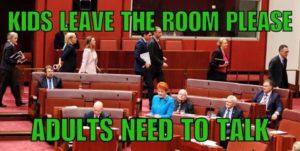 A couple of days ago, in response to the featured meme, which pilloried the Greens who walked out during Pauline Hanson’s second maiden speech to Parliament, an avid XYZ reader summarised why the pre-planned walkout was so badly thought through: