Last week, an organization called Save The Day – Vote released a video in which the cast of the Avengers and many other celebrities came together and urged Americans to enroll and vote. While this seems a noble goal, this is really their secondary goal, with their primary goal being to prevent the election of Donald Trump. What disgusts me even more about this video is the condescending tone used by this celebrities and the blatant disrespect and elitism these celebrities have towards mainstream America.

In the start of the video, these celebrities state how they have got together a “s— tonne of famous people to convince you to vote,” and of course ultimately, to stop Donald Trump. What this statement implies that the American people are so dumb that they need celebrities to convince them to vote and to educate them on how to vote. Furthermore, they go on to call Donald Trump and his movement an “ecological disease” and a “crisis”, Harping yet again on the Ludicrous claim that Trump will start World War 3 because “he’s good at firing things.”

What’s clear about this video is that yet again we see the Democrats and Hollywood advertise their sense of intellectual and moral superiority with no regard for the concerns of everyday Americans. Hollywood celebrities do not fear that their jobs will be outsourced to China through a disastrous trade deal. They are largely unaffected by much of the crime committed by those crossing the Mexican border. They will be largely unaffected by an influx of Syrian refugees, which will put further strain on much needed government services that the poor and military veterans in America rely on, and will heighten the risk of terrorist attacks in America.

These celebrities believe the American People are so dumb that harping frequently disputed claims about “Trump starting WW3” will scare the American people into changing their vote. By calling his movement a “parasite” they are blatantly scoffing at the concerns of the American people about both their livelihoods and ignoring their discontent for the Washington Establishment.

Unlike everyday Americans, they are not fed up with the lies and selling out of America by Establishment politicians such as Hillary Clinton. The truth is that many of these celebrities are doing the bidding of these politicians, or themselves are part of this establishment structure. They are exhibiting elitism to the highest degree; they believe that just because they are part of the leftist intelligentsia in Hollywood, that the American people should forget about their concerns and listen to what they say. The reality is, this video is a Clinton propaganda tool that will ultimately blow up in her face. Americans don’t trust their media and in particular do not trust Hollywood. And as Trump soars in the polls, we’re likely to see more of these ridiculous attempts by Hollywood to influence the election, as the establishment become more and more fearful of a possible Trump presidency. 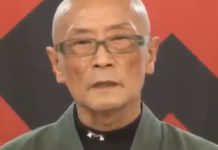 The jews fear the Samurai