The marathon US Presidential Election race is finally into the home stretch, with the two major parties choosing their candidates; Donald Trump for the Republicans and Hillary Clinton for the Democrats. 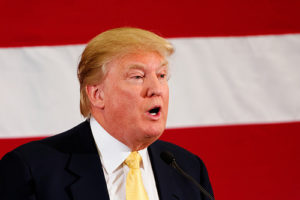 Both candidates have caused, and are also the result of, major fissures in each party. Donald Trump represents the anti-establishment wing of the Republicans. Establishment Republicans have come out in force attacking his credibility, but he has also brought large numbers of new supporters into the party, and is polling well across all segments of society, despite attempts to paint him as a bigot.

Clinton is the establishment Democrat, but has fought off a major insurgency led by Bernie Sanders within her own party to secure the nomination. The Democratic party machine may well have sunk to new depths of corruption to ensure Clinton’s nomination. Also, the mainstream media has colluded extensively with Clinton to largely ignore the email scandal, the Benghazi scandal, the Clinton Cash scandal (to name just a few) and the fact that a massive array of fences had to be erected around the Democratic Convention in Philadelphia to keep out fellow Democrats opposed to Clinton’s nomination.

Despite the corruption and downright criminality of the Clintons, serious doubts about Donald Trump as an alternative for conservatives remain. Given his apparent support for a government-controlled medicare system, he does not appear to hold “pure” conservative economic credentials. And despite challenging politically-correct taboos, and openly discussing the threats of Islamic terrorism and lack of border protection, his crudeness in doing so can be unnerving.

But it is indisputable that this bluntness is one of the characteristics which has made him such an effective candidate, and both his successes and mistakes as a businessman make him exceptionally qualified to make decisions which will affect the US economy; far more qualified than the socialist agitator, sorry, “community organiser” Barack Obama, who has overseen the doubling of US debt, ever was.

Thus, the US Presidential election presents us with a number of challenging questions. The XYZ wants to know who you support for US President, and why. Given that the election is one which affects the whole world, but in which only Americans can vote, we have framed the question accordingly. We have also included the possibility of Greens candidate Jill Stein, and Libertarian candidate Gary Johnson, because, you know, throw your vote away.

As ever, we await the faint possibility that Ronald Reagan will return from the grave and restore order to the galaxy.