Have you ever noticed just how regularly someone that the left media portrays as a victim, role model, or hero completely and effortlessly blows up in their face with a little lazy Googling by curious centrists and conservatives? You can set your watch to it. At face value, it beggars 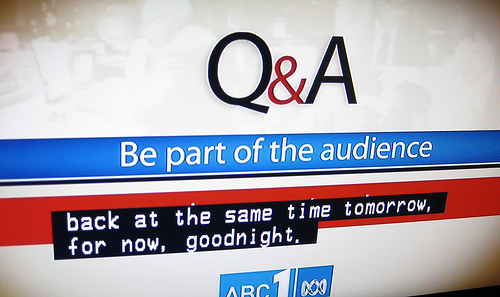 belief. Looking into these ‘class acts’ takes less research than a Coeliac scanning a food label for any sign of gluten. Vetting them is often as simple as a good old-fashioned Facebook stalking or typing their name into a search engine. Or failing that, asking a few basic questions of whoever’s life these muppets are trying to ruin as part of the latest hate crime hoax.

It just doesn’t make sense. Why is a baby boomer Ray Hadley listener who had to get his grandson to set up his new printer seemingly better at doing online background checks on the Zaky Mallahs and Duncan Storrars of the world, than someone in the research department at Q&A who’s on a hundred grand a year yet performs about as adequately as the ABS on census night?

But when you really think about it, one of the main inherent flaws of Cultural Marxism is all the evidence you’ll ever need of why none of the checks and balances that might be undertaken by a more reasonable person before endorsing somebody’s legitimacy or discounting them as problematic are ever done.

The left media will closely vet those that they are framing as villains quite well. They’ll do it painstakingly and methodically. The same Q&A researchers who somehow missed several of their audience champions/victims open social media tirades advocating violence toward women and Jews, were remarkably adept at researching and dissecting the minutia of the new One Nation senator’s heinous belief that a few questions should be asked of those raking in millions from climate alarmism, so that they could stack the decks with Regressive Leftists, who believe that his scepticism about the climate change industry is silly, but that their beliefs in a vast and nefarious conservative media conspiracy in support of Donald Trump are statistically sound.

In between bouts of wanting to claw my eyes out on Monday, I was hoping that new Senator Malcolm Roberts would counter Brian Cox’s smugness and graphs with several sheets of his own, one saying XX (the female chromosome) and one saying XY (the male chromosome). Roberts could have effortlessly made the entire panel squirm into an awkward segue into safer regressive left waters by asking “If you guys are so beholden to science, which of these combinations more closely indicates the current genetic profile of Chas Bono?” But I digress…

While the Q&A researchers most likely had a file of J.-Edgar-Hoover-sized proportions in preparation for Malcolm Roberts’ appearance, they seemingly missed Zaky Mallah’s charming comments about Miranda Devine, the opinions of the Islamic dude from the Shire’s views on Jews, and Duncan Storrar’s shady past. Why was this? Well, it’s quite simple really. While they love and acknowledge those evil old white men who make up the patriarchy and feed little children to lions on Nauru as villainous caricatures, nobody on the pyramid of hierarchal victimhood could possibly do any wrong. All are victims, some more than others. It’s a caste system, but curiously Indians aren’t on it because they strayed off the left plantation and became conservative entrepreneurs. None of these accredited grievance members are physically capable of doing anything nefarious. The mere notion of it is just silly to leftists.

If you were to ask an intellectually challenged deadbeat dad who appeared to ovations on Q&A to threaten to kill someone, his tongue would seize up. If you asked the father of Omar Mateen to tell us what he really thinks about gays, he literally wouldn’t be able to form the sentences, and in all likelihood would break into song with a rendition of Alicia Bridges’ ‘I Love the Nightlife’. For the regressive left, the concept of someone from the hierarchal victimhood caste system doing something not completely above board is unfathomable.

It’s like the scene in Robocop where Peter Weller becomes crippled when he tries to to shoot Ronny Cox because his directive prohibits it. As far as Q&A researchers are concerned, the Duncan Storrars and the Khaled Elomars of the world are infallible. Officer Murphy is unable to point a gun at anyone, while the likes of Malcolm Roberts are portrayed as machine-gun-toting ED-209s, to be closely scrutinised, dissected, and destroyed in a barrage of #qanda tweets.

This is the main failing in Cultural Marxist doctrine, and socialism in general. It operates on the assumption that anyone from a regressive-left-accredited oppressed group is a fair and reasonable person with no nefarious leanings whatsoever. This leftist house of cards simply will not stand without such an assumption, yet it always collapses as soon as the first opportunist arrives on the scene. If the doctrine was sound, and the undeniable human trait of opportunistic mean-spiritedness didn’t exist, I’m sure all of their nonsense would be working out just fine. We’d have a Cultural Marxist utopia of milk and honey.

I’m certain that when Angela Merkel announced that the EU would accept anyone displaced by the Syria conflict, she assumed that several hundred thousand (probably Christians) completely and utterly legit Syrian refugees would take her up on the kind offer. Everything would’ve been dandy. A victory for humanitarianism. Unfortunately, that pesky opportunism reared its ugly head. Virtually overnight it became cooler for Afghans, Africans, Iraqi’s Serbs, Albanians, and others to identify as Syrian and persecuted than it was for Coppercab to identify as a feminist. A manageable several hundred thousand genuine cases became a virtual standing army of several million blow-ins. Corey Worthington couldn’t have orchestrated such an ill-conceived out-of-control party.

The awkward fact is that not all, not even most of the designated hierarchal victims of the regressive left make for model examples of humanity. There are always enough people of any colour or creed who are willing to take advantage of goodwill to make a system collapse, however noble. This is why we do stock takes and audits. A little visible scrutiny is good for business, whether that business is an evil capitalist moneymaking venture, or a socialist ideology. Stock takes and audits keep flawed and opportunistic humans honest.

Cultural Marxists are in complete denial in this regard. They bemoan the lack of generous welfare without realising that keeping things slightly uncomfortable for welfare recipients not only a degree of aspiration, but discourages rorters from plundering the welfare safety net.

They refuse to accept that a group of Pakistani immigrants in Rotherham can be more rapie than Mountain Man #1 was in Deliverance, and maintain the denial even as thousands of cases are covered up. The lie becomes more important than the truth.

Until the regressive left can finally admit that it has a major problem in vetting those that at face value tick all of the special interest boxes, we are bound to see more cringeworthy damage control every time one of these heroes or victims is quickly and soundly outed as problematic by conservative pundits with no such scruples about properly vetting them.

Conservatives are hesitant to endorse anybody without at least checking them out. It’s a trait of capitalism. The regressive left has a hive mentality that dictates that if somebody is on their side, then obviously they are a wonderful person in all regards. It’s a reckless policy that’s doomed to fail as soon as the first opportunist arrives on the scene, but no left-leaning case worker is going to put their hand up to be the first to ask someone like Man Monis if his rudimentary poetry is all just a ruse to gain a protection visa.