The Australian of the Year is a prestigious award which is awarded to a person who puts forth an outstanding contribution to our nation. Unfortunately it has become another institution which has been shamelessly hijacked by the Left.

According to the official AOTY website, the winner “inspire[s] us through their achievements and challenges us to make our own contribution to creating a better Australia.”

This should be an honour for any and all Australians; however, like all institutions that are hijacked by the Left, it loses its appeal when only the most left-leaning advocates are nominated.

“Each year, the list of finalists offer an insight into our nation – the problems we seek to confront, the issues we want to highlight and the ideas we choose to pursue” – Malcolm Turnbull

This brings us to the AOTY 2017. Nominations have just closed and one can only speculate as to who will win the award. The three most recent recipients of the award – who they were, what they stood for, and the way they conducted themselves as AOTY – gives fairly clear indication as to the policies and values the 2017 winner will adhere to. 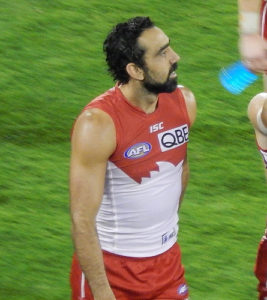 The winners of the last three years have all been left-leaning advocates with left-leaning values. In 2014 we had the famous and talented AFL legend and AOTY recipient. A brilliant footballer to be sure, but, precisely what insight into our nation did he offer? What problems or issues did he highlight that we, as a nation need pursuing? The only reason he even registers on my radar is because he had an innocent young girl removed from a football match after screaming a word of which the connotations I very much doubt she understood. Is this how Australia wants to “choose to pursue” issues within our society? A brilliant footballer copped a taunt and reacted by naming a 13-year-old girl ‘the face of racism’. There was so much that he, as Australian of the Year, could have done for the plight of Aborigines living in remote communities, but he instead chose to play the race card.

The 2015 recipient raised awareness about the atrocities committed against women and children by male family members. While these acts are abhorrent, somewhere along the line this has morphed into most men being violent bigots. Such now is the narrative of the Left. While I don’t disagree with what she stands for, I do very much disagree with the way she has gone about using her AOTY position to demonise ordinary Australian men, especially the much-maligned white family man.

Lastly, we have the former Chief of Army. Exactly why he was nominated in the first place remains a mystery to me. But again, aside from attacking mainstream Australians and telling us all how sexist we are and wagging his finger at us, precisely what has he achieved as Australian of the Year? He’s criticised the “warrior culture” in the Australian Defence Force, which is ludicrous, for what is a soldier if not a warrior? He’s labelled workplaces sexist, with his greatest achievement in 8 months being his crusade to have the word ‘guys’ banned from the workplace.

Rather than celebrating the greatness of our nation and highlighting the tolerance within our culture, the last three AOTY recipients have divided us and criticised everything that we, as a nation, stand for.

Will the 2017 AOTY further criticise and divide our once-proud nation, internationally famous for its mate-ship, multiculturalism and inclusiveness? Would it be wishful thinking to hope for someone who unites our nation, offers insights, confronts problems and pursues ideas to further our tradition? How long will ordinary Australians stand being labelled as racist and/or sexist bigots?

There are certainly issues we need to confront, and challenges that we need to pursue, but nominating people who only further divide us makes these goals harder to achieve. It is time someone was awarded as AOTY who will unite Australia rather than divide us.