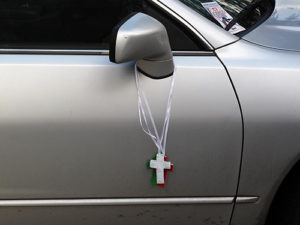 Most of you probably don’t know me, since I’m quite new as an XYZ contributer, but I am very definitely Christian.

Recently I gave a lift to a friend who is a humanist, and who doesn’t believe in God but doesn’t completely disbelieve either. Knowing that we have such a fundamental disagreement, I asked if he thought I had too much religious stuff in my car (meaning to ask if it was offensively in his face).

What I have is a glass sculpture of a cross and a coin-sized token of St Dominic Savio on my dashboard, an icon of St Monica on the front seat, and, at the time, a broken crucifix that I had to take to be mended.

My friend’s reply was that, not believing in my faith, he wasn’t one to comment.

This, to me, is an example of real tolerance: he wasn’t offended by what I had in my own car, no matter how obvious it made our difference of beliefs. It simply didn’t matter to him, so he ignored it.